Chiefs have over 300 yards of offense with 10 minutes left in the 2nd quarter!

Ravens/Steelers has now been moved to Wednesday

Just have them sim it on Madden and be done with it.

Will Fuller is suspended 6 games for taking a banned substance prescribed by some doc.

I don’t know, he stayed healthy all year. The doc should get a Nobel Prize.

Staff member
My dynasty team is so fucked. Turns out my 5 starting RB's strategy where I can pick between Mostert, CMac, Jones, Jacobs, and Drake every week starting next week based on matchups just hit its limits. I barely have enough WR's now.

You can take the loser out of Detroit...

I'm late on this, but the Denver/Saints game should have been delayed. If I'm a Denver fan, I'd be screaming at the NFL and the Broncos for a long time. NFL for not delaying the game, the Broncos for not hammering home the importance of following the COVID guidelines and getting the team in that shit show of a situation.

The NFL should not be having what amounts to an FCS option team visiting Alabama. I even felt bad for the defense for Denver because they got gassed so easily, no amount of talent and conditioning could have prepared them for that.

And, as a Saints fan, it is kind of embarrassing in mixed fan base company to be like, "yeah, with that win over the QB-less Broncos, we're still the #1 seed." IF this team some how wins the Super Bowl, I wouldn't hold it against the entire Denver fanbase to scream "asterisk" at my fellow fan base.
The whole situation just sucks. I've read so many articles and listened to so many talking heads, I get why the NFL forced it. I get holding Denver accountable. But shit. Coach Payton didn't say it, but his subtext of Taysom executed the game plan we asked him to execute equated to dumbing down the offense because they knew they were going to run away with it regardless so why show off by putting 50 on them. Parity makes this a fun sport to watch. Would I love my team to have 9 Super Bowls in 20 seasons like some other teams? Sure, but I'd like to think they got it playing 11 on 11 against highly paid professionals and not some poor dude who was a WR yesterday.


All that to say, I will be insufferably fanboying if this team does go all the way (to be slaughtered by the AFC representative).

You’re right but I wouldn’t feel guilty as a Saints fan. All the team is supposed to do is beat the team on the field. However far they go, they’ll have earned it.
S

Jets take the lead late v the Raiders. Jags losing to the Vikings. If those scores hold up the Jags would control the number 1 pick

This is way too tense.
A

Jets are going to win!

strummer said:
Jets are going to win!
Click to expand...

Staff member
There wasn't really any way to easily cover that man-on-man either. Ruggs is just too fast.

Yesss the Bears house cleaning rumblings are getting louder. This was a good loss.

I really would like to fire up that 10 year old thread: "Fire Jerry Angelo Day".

Staff member
Patriots steamrolled the Chargers and Gunner managed both a PR TD and receiving TD courtesy of Jarrett Stidham. Good team win although it's still concerning that Cam was 12/19 for 69 yards passing... He's also 3 rushing TDs away from tying his career-high though.

Pats probably finish the year at 7-9 (they play the Jets in Week 17) unless they can get a win over Buffalo or Miami in their final stretch.
Z 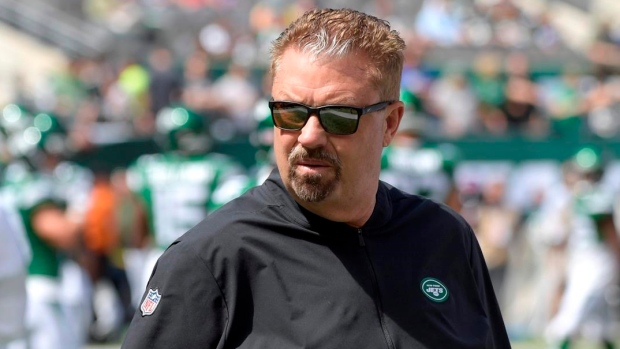 The New York Jets have fired defensive coordinator Gregg Williams one day after their loss to the Las Vegas Raiders, according to ESPN's Adam Schefter.

Killed two birds with one stone. Do what you can to tank, blame it on the DC that sucks so you can fire him.
H

It is greatly amusing that the 0-16 Browns and the future 0-16 Jets had the same scumbag DC.

Staff member
I was gonna say that flies in the face of him tanking himself, but that teams wanting to tank keep him around because they know he sucks.

In any case, we got refballed at the end when Agholor was in the end zone and dove to the ground with guy putting his hands all over him so he couldn't catch a touchdown. We deserved to win but I'm pissed that the Raiders keep having these same problems every week. Our defensive tackles suck fucking dick and basically anyone can run for 200 yards against them. We also had a great offense before the last two games and I would like to know what happened. They were scoring almost 29 PPG.
Z

909 said:
Our defensive tackles suck fucking dick and basically anyone can run for 200 yards against them. We also had a great offense before the last two games and I would like to know what happened. They were scoring almost 29 PPG.
Click to expand...

This sounds eerily like the Bills as well. Somehow we are dogs tonight against a team 1-3 in their last four, playing on a neutral field with Nick Mullens at QB.