Fuck that. Leave it dead and buried. I cannot think of a show that was that ruined by the final season.
2

If he is a crimefighting lumberjack who kills criminals while making puns, I''ll preorder the season set right now.

Youth N Asia said:
Fuck that. Leave it dead and buried. I cannot think of a show that was that ruined by the final season.
Click to expand...

Roseanne might have had the SECOND worst final season ever, but Dexter still tops it simply for fucking up the most obvious no-brainer storyline in television history by refusing to have Miami Metro discover his true identity. Roseanne didn't have the luxury of having an all-encompassing final season plot built into the show from the very first episode.
M

My least favorite part is how clueless the showrunners and producers are.

"We felt like this was who Dexter was and we were true to that until the very end. We feel like we absolutely delivered." (Paraphrasing)

Who are these idiots and how do they wind up with these jobs?

Mik said:
My least favorite part is how clueless the showrunners and producers are.

"We felt like this was who Dexter was and we were true to that until the very end. We feel like we absolutely delivered." (Paraphrasing)

Who are these idiots and how do they wind up with these jobs?
Click to expand...

The writers were also self high-fiving over that sweet Professor Gellar swerve that they got everybody with. That NO ONE knew about but them and EJO.
D

At least they haven't screwed up Homeland too badly.

Staff member
Just finally capped off the final 3 episodes to the series just for closure purposes so I refused to watch them at the time... my real time reactions.

My favorite part of Dexter's final season was that it aired exactly at the same time as Breaking Bad's final season. It's crazy how intense and urgent one felt compared to the other.

Sort of in between binge shows right now, have a few recommendations I may pursue. Last week (or week before?) I decided to rewatch the Dexter pilot. Knocked out season 4 about an hour ago.

Still a pretty jarring scene at the end. Not sure that I'm going to continue from here. 5x01 was cringeworthy from what I remember and I don't want to go through that again, though I loved Julia Stiles as Lumen.

Season 5 is okay but unfortunately followed 4. Season 7 and 8 are the worst.

I was hoping we'd get the lumberjack serial killer revival show after the long bump.

Thrasher said:
Season 5 is okay but unfortunately followed 4. Season 7 and 8 are the worst.
Click to expand...

I binged the entire show in time for the final season when it aired. I was well past the hype for season 4. It was a terrific season, and the end of it was a hell of a punch to the gut. I really liked season 5, though. I thought it was still very good, but after the high of season 4, it was bound to be a let down for most. Watching it without the hype helped me enjoy it more. Season 6 wasn't too awful, but 7 and 8 were the drizzling shits.

treble said:
Good thing he didn't have a bigger beer cooler on his boat.

Pretty sure Masuka's daughter only existed because someone on the show wanted to see her boobs.

"Yeah, Dex, we have video of you killing the guy that killed your sister, but you should probably just leave"

Hannah doesn't notice Elway get on the bus and sit right beside her (lucky that seat was empty on a packed bus) and the people behind her don't notice her stab him with a needle.

Some guy got his tongue cut out, must be Saxon!

I need a gif of Dexter's face when he's pulling the tubes out of Deb's mouth.

Harrison spends almost every waking hour with either Jamie or Hannah, but apparently never mentioned that he saw Hannah all the time to Jamie.

So awful, I loved it so much.
Click to expand...

Every once in a while I'll think about how awful the last season was, but there's stuff in this post here that I don't even remember, that's how much bad stuff there was!

I guess during my first run through I didn't watch it with subtitles. I always thought Batista's daughter's name was "Audi" (like the car) which I didn't really question because it's not like I'm a scholar on names in Cuban culture.

According to the Netflix subtitles and the Dexter Wiki, the child's name is "Auri." For some reason I'm still hearing a "d" instead of an "r" every time Angel or any other character speaks her name. Weird.

I powered through season 5 on some days off and it's looking like I'll go ahead and finish the binge.

It's funny how in the first few seasons Batista is a dedicated father and then he stops mentioning her in later seasons.

Wrapping up Season 6 and the 2nd to last episode is exactly where the show went south for me. When the shrink guides Deb into the romantic feelings for Dexter angle, I threw my metaphorical beer at the TV.

(I have an adoptive sister, found it offensive, I never get real life offended at TV.)

Staff member
Bringing up so much stuff I kind of blocked out by that point. Completely forgot about the Deb/Dexter 'romance' angle they tried to push.

6 is when I started straight up hating the show. Colin Hanks can be okay in some parts like Fargo where he plays a nice guy cop, but he was completely miscast as a serial killer. The big twist regarding Edgar James Olmos was hilariously predictable too.

While 6 was a letdown, 7 kinda got good again. They finally made Laguerta interesting.
Z

So this is happening: 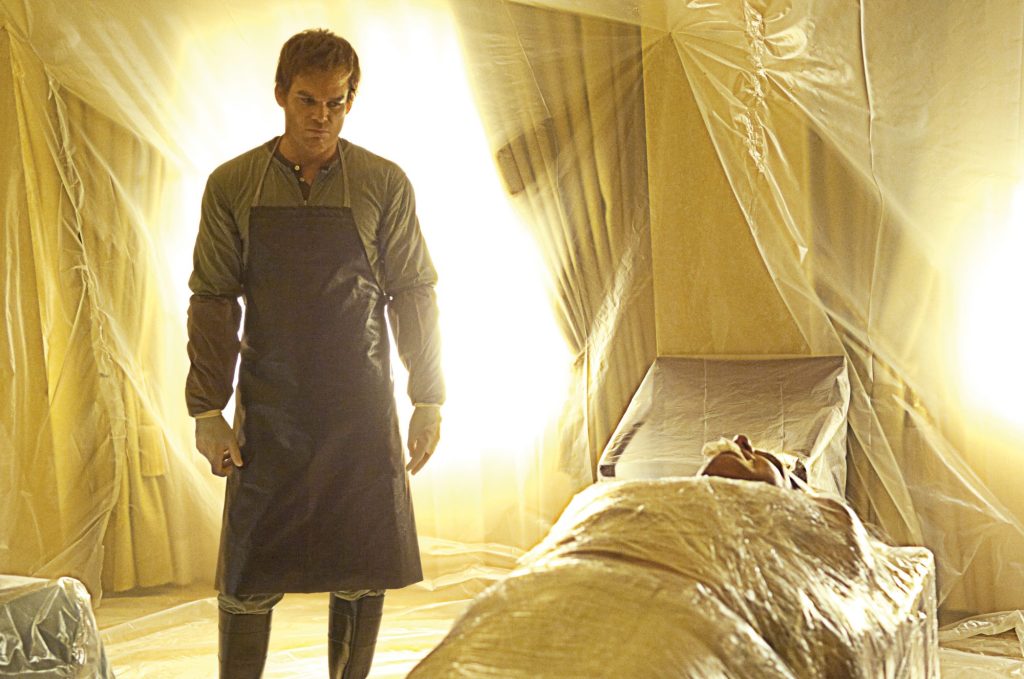 Sharpen your knives, “Dexter” fans. Showtime has ordered a limited series revival of the beloved serial killer drama with Michael C. Hall set to return. The premium cabler has ordered 1…

Staff member
Can't say I won't watch it. Definitely am going to. The show runner will be the guy who ran it back when it was actually good.

I'm probably gonna watch it, but even those early seasons have kind of aged like bread. TV feels so advanced from Dexter over the last seven years. There's some cool shit throughout like Michael C. Hall's performance until Season 6, Doakes, Jimmy Smits, and John Lithgow, but that damn Dexter voiceover explaining every thing makes the show age so poorly compared to other prestige shows from that time. Another thing that ages it badly is that besides Dexter and whoever Dexter's antagonist of the season is (Doakes, Lyla, Miguel Prado, The Trinity Killer), the rest of the cast is pretty terrible, boring, and one note. Jennifer Carpenter has a couple decently acted breakdown scenes, but her character is terribly written for the most part (As is all the female characters tbh. They are portrayed as either just victims, black hearted shrews, or crazy). The rest of that cast is pretty useless including my least favorite comedy character Matsuka and lamest cop ever Joey Quinn. I'm not expecting anything good, but it should be better than the last 3 seasons at least. If it's bad then that is even better because the last 3 seasons provided comedic gold like this

For real I'm begging you to do a Dexter rewatch (Mostly because the writeups would be hilarious, but I understand you have a massive list), because Season 6 is so goddamn boring. It's when it fully embraced being a bad show, but the pace slowed to a crawl and everything was so dull. That's when they started to include multiple love stories and soap opera shit between Miami Metro as well . I think Season 5 had tension and moments where I was reminded why I liked the show. 6 is a total bore with the most boring bad guy ever. 7 is even better than 6 since it was Dexter vs The Russian Mob and seemed like it might be interesting again for like 2 episodes before they fucked it up. That fucking reveal of Edward James Olmos in 6 was the most predictible thing ever and I almost stopped watching when they made it like it was a massive plot twist when I and almost everyone watching at the time noticed how strange everyone but Colin Hanks was acting towards him in their first scene together. If I want to laugh at bad television, I would choose Season 8 over Season 6.

I think 6 was also the incest sex dream which might be a season highlight. 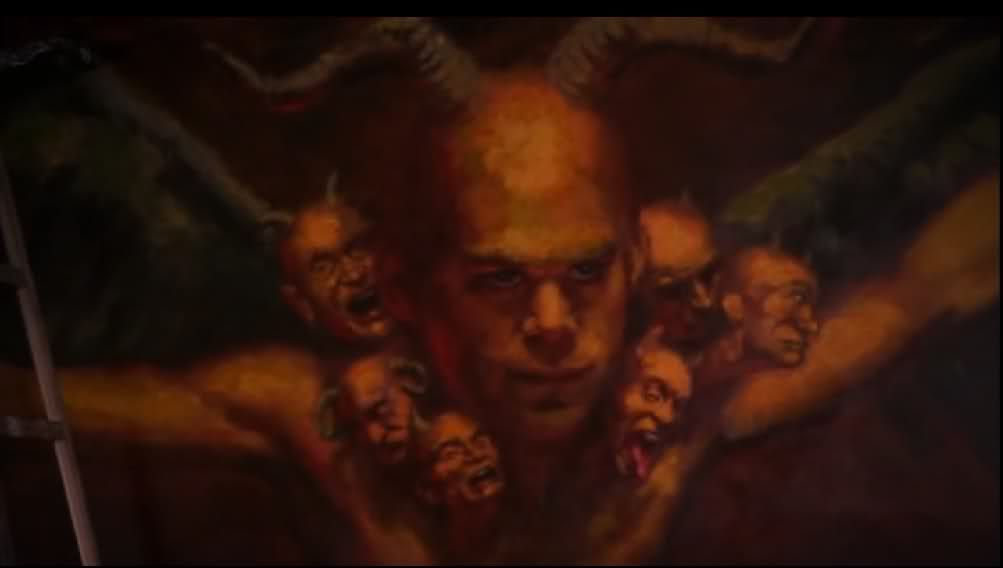 I’ll watch it. That final season was a botched abortion. There’s no total redemption for the series.

I'm gonna take a guess that Harrison will be teenaged and they deal with Dexter mentoring him. I don't know if they keep sexy blonde serial killer lady that Dexter left his son with or not. If they want it to be close to good, it's best to stray far away from the series finale and retcon some stuff. The main retcon should be that Doakes actually lived and he's been turned half robot. Basically Doakes is just Jax from Mortal Kombat 3 and ready to come after Dexter.

Clyde Phillips did have the Dexter character lean towards the direction I thought was gonna be the end game. Dexter snapping and become a full on evil serial killer. But the writers and showrunners after he left were obsessed with Dexter being a Batman type vigilante hero and it made the character so boring in the last couple seasons. Look at the shift critically (Green is RT and Orange is Metascore) after Phillips left and Scott Buck took over as showrunner in 6 lol. People forget how well the first 5 seasons did at the Emmy's.

Staff member
I think everyone should watch the last season. There's so much terrible shit that you just forget about because the whole thing was so bad. Remember when he staring through the diner window for what was probably hours?