Apparently a game that was being made and just referred to as Summer Camp is in actuality a Friday the 13th game and the likes of Sean S. Cunningham, Tom Savini, Harry Manfredini and Kane Hodder are involved in it.

Looks like it's gonna be Evolve-esque where one player will play as Jason and up to 7 others will play Camp Counselors and will have to attempt to either escape the camp or beat Jason, but that will apparently be rather difficult. I've never gotten in on a kickstarter for a game before but I might drop some coin into this one.

I hope there's a single-player version because Evolve's downfall, in addition to the horrible pay-for-upgrade system and forced class system, was the lack of a single-player campaign. It's something that I absolutely loathe about more and more modern games.

I'll be keeping an eye on this one.

Looks like the Single Player portion may be a stretch goal if they get enough dough..?

That really depends on where this Kickstarter campaign takes us. Summer Camp was originally conceived as a multiplayer title only, and thus was budgeted as such. It was only after taking on Friday the 13th that we really started to dream up plans to bring Jason to life in ways that everyone has wanted to experience (but no one has been able to create to date).

To that end, the proposed single player portion will give you the Jason experience you’ve never had; direct through his eyes. We’ll be offering several ‘scenarios’ based off classic movie scenes from the franchise as you stalk and kill each and every counselor from a first person perspective. Not to leave the counselors out, we’ll be adding several counselor scenarios where you’ll have to confront your fears and take on Jason directly, especially in compromising situations! We are not going for anything less than a Mature Rating on this; the franchise deserves it! These scenarios might also make their way to VR, and would bring an entirely new perspective to the slasher genre!
Click to expand...

I hope the single player campaign is just a straight remake of the NES game.

This kind of game really needs a single player campaign, in fact I think it's unfortunate that the main game isn't just that. Multiplayer for me (outside of MMO games) are still an add-on feature for me. Most games that have had awesome single player campaigns have left me not caring to even dive into the multi-player aspect. Outside of maybe Dead Island but that was because it was online co-op for the campaign itself.

I just don't want this to end up being Call of Duty: Crystal Lake.

I really have no problem with a single-player campaign basically just being the main game but you're one of the counselors with AI counselors/Jason. I don't need Until Dawn (not just because it's a 5-hour QTE) or the Last of Us, but something beyond "uhhhh...just play the same level over and over." Take cues from Left 4 Dead 1 & 2 and have a loose story wrapping up multiple campaigns, but gear it toward multiplayer over all.
B

DC: When this game was announced as Summer Camp, it was touted as an asymmetric multiplayer game, which is where players occupy the same game but one (or some) have a very different role than others. In this case, that’s killer versus victims. Is Friday the 13th an online-only experience, or is there a single player mode?

Ronnie Hobbs: At its core, Friday the 13th: The Game is an online-only asymmetrical experience, but one of our stretch goals is definitely to include some type of single player experience. Once the community and fans decide if they really want single player, we can slowly start to define what that experience will be like. We’ve already discussed to great lengths internally, so we have a pretty good idea of what we would like to see.
Click to expand...

No, fuck you. Titanfall was raked over the coals for not having a single player campaign and Evolve was traded back in quickly for similar issues. I refuse to pay money for unfinished games.

Well, FWIW and based on the backer levels, it looks like the digital version of the game only costs about $25.

The footage looks good, they definitely "get it" when it comes to Friday the 13th. Still want to see and read more about how the actual game plays out once it is further along.


NoCalMike said:
The footage looks good, they definitely "get it" when it comes to Friday the 13th. Still want to see and read more about how the actual game plays out once it is further along.
Click to expand...

My worry is that if you're Jason, the AI of the victims will be horrible and they'll do stupid shit like run right at you, turn and just stand there until you kill them, not alert 3-4 people who are feet away, etc.

apparently peopled hated the NES version, I liked it and the soundtrack is classic.

NoCalMike said:
The footage looks good, they definitely "get it" when it comes to Friday the 13th. Still want to see and read more about how the actual game plays out once it is further along.
Click to expand...

My worry is that if you're Jason, the AI of the victims will be horrible and they'll do stupid shit like run right at you, turn and just stand there until you kill them, not alert 3-4 people who are feet away, etc.
Click to expand...

Well as of right now, isn't it exclusively a multiplayer game? Unless they allow you to play offline with AI bots generated instead of live players?

If there isn't a single player campaign, and a healthy one at that, my fear is I would buy this merely due to my horror fandom, play it a few times and then it would just sit there due to overall non-interest in multiplayer.
F

NoCalMike said:
The footage looks good, they definitely "get it" when it comes to Friday the 13th. Still want to see and read more about how the actual game plays out once it is further along.
Click to expand...

My worry is that if you're Jason, the AI of the victims will be horrible and they'll do stupid shit like run right at you, turn and just stand there until you kill them, not alert 3-4 people who are feet away, etc.
Click to expand...

Oh...so it'll be realistic to the movies then?
B

Well the release has been postponed, but more importantly we're going to get single player stuff added...

Project Update
Let's get right down to it... This is a HUGE update and we have lots to talk about.
We at Gun Media and IllFonic are very proud to announce that we're going to be able to give everyone that pre-ordered the game, and all those that buy the game from here on out, the most-often requested features and content!
Friday the 13th: The Game will feature the multiplayer experience that we've been building to date; but we're also announcing that we're adding a single player experience and the inclusion of AI bots!!! We've heard it from many fans on Facebook, Twitter, Instagram, our own Forums, Reddit, in person at various conventions... You want offline play and Single Player, and we've listened and found a way to accommodate it in the budget and our schedule.
While the addition of Single Player and AI Bots means a bigger game for all, they also mean a delay from a Fall 2016 release window to a new launch window scheduled for Spring 2017. Gun Media and IllFonic will use the time to lay down the groundwork for the single player experience while continuing development of the multiplayer portion with additional content that we're about to talk about below. 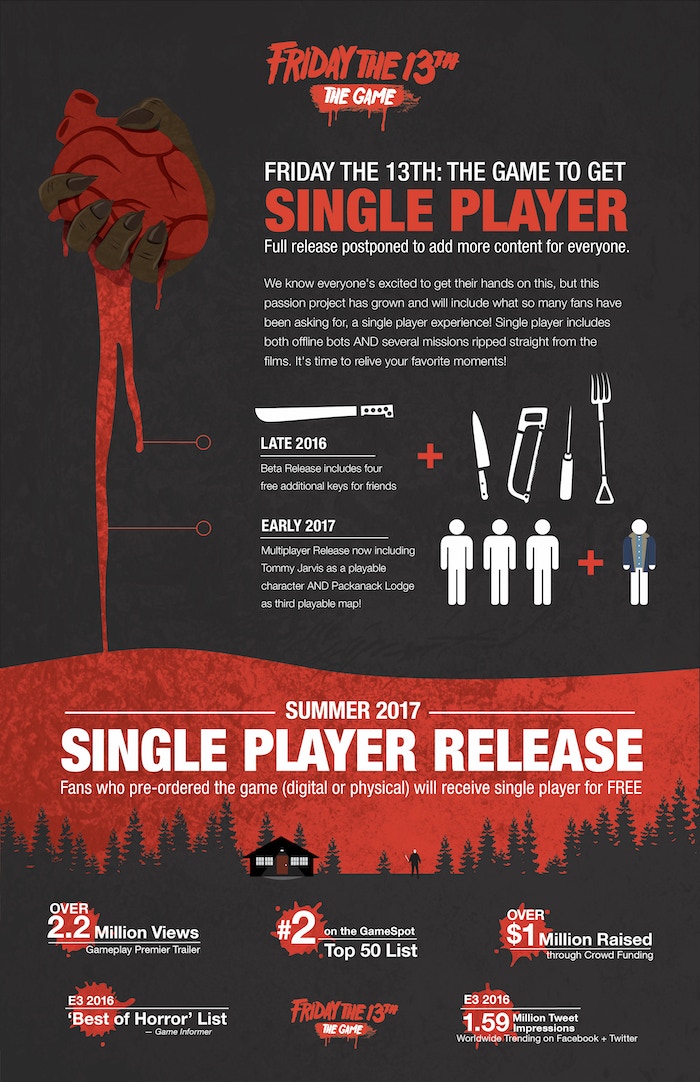 We're also announcing that Tommy Jarvis will return to Camp Crystal Lake as a playable character! As you all likely know, Tommy Jarvis is featured in multiple films in the franchise and is one of Jason's main protagonists and he'll return ready for battle.
We have a big new map to announce too! Today we're revealing that Packanack Lodge is our 3rd playable map that we'll be offering in the multiplayer game. Fans can return to the scenes of Friday the 13th: Part 2 and play out their own horror movies in legendary film locations.

Release Schedule
The release schedule is roughly as follows:
Fall 2016: Beta Release including 4 additional beta keys for friends when pre-ordered (KS Backers will get an additional 4 beta keys for their friends as well)
Spring 2017: Multiplayer Release with Tommy Jarvis and Packanack Lodge as the third playable map
Summer 2017: Single Player Release and Offline AI Bots

I am waaaaay ok to wait until next Summer if it means a solid single player experience!!!!!

Agreed. Totally okay with this kind of a delay.
B

A custom Jason skin created by Tom Savini. Designed as an interpretation by Tom of what would have happened to Jason after Part 9; Jason has escaped Hell!

and a new trailer
https://www.youtube.com/watch?v=dw5g5NPGuNw

It looks really good. Some of those kills were amazing.

I would have released it on June 13th. It's not a Friday but a lot of things release on Tuesday.

Sooooooooo getting this. Being able to pick multiple Jason's? Choosing different perks as a counselor? Was that TOMMY JARVIS?!

Also, big props for Gun Media using the Vidmark-style logo at the beginning of the trailer. That practically had me sold right away.

All the more reason it's on my shortlist. Anything to give that poor Trioxin victim a few more bucks.

It'll be nice to see the tumor covered Hell Jason do something other than throw John LeMay into a jungle gym, or get shot up by the FBI.

Game is live and downloaded to my PS4. Itching to get out of work and try this out!