They have also set up a Facebook page for the 3D concert movie from their Appetite for Democracy Vegas run. It will be out in theaters, on TV and DVD later this year.

Here's a set list of the concert, via Blabbermouth.

dead man said:
Chinese Democracy is crazy underrated. I love that album. It seems like most hardcore GnR fans dig it, while your average rock listener who likes the hit songs thinks it's the punchline to a joke
Click to expand...

30 songs?! Holy shit some people got their moneys worth!
J

That's the one thing about these new GnR tours. For all the complaints about how late they've gone on, etc. they've never skimped on the setlist. They've never been a band that goes on for an hour and leaves. Some people don't like all the various solos, but it's kind of a necessary evil that's allowed Axl to go for 20+ songs a night.

Exactly. I think they played for about 3 hours when I saw them.

"Civil War" came on sirius's hair metal station earlier while I was driving and I started rocking out so hard that I almost crashed my car.

I love when songs you never hear on the radio pop on. I would tell a story about Cry Me A River by Justin Timberlake coming on a few days ago...but this is a rock thread...so that didn't happen.

That's actually the second time in the last week I've heard "Civil War" on that station. Last time I only caught the last minute or so, tho.

I bought the single for Civil War on cassette back in the day for $1 at a flea market. I wore that tape out. It became my favorite GnR song and I still love it to this day. Great, underrated track.

Having grown up sheltered from Hard Rock, I missed out on Guns N Roses heyday. When I was 18 and driving my own vehicle (1999), I caught "November Rain" on the local rock channel for the first time and it was the most amazing thing I had ever heard. That was my gateway to GNR.

You Could Be Mine popped up on the radio a few weeks ago, and it rocked, iirc.
J

Hearing Rocket Queen on the radio a few years back was quite the surprise and awesome.

I also heard "There Was A Time" once right after Democracy was released....at 4:45 AM.

Anyways, here's hoping for a summer US tour!

Ohhhhh, hearing Rocket Queen on the radio is always a treat considering how little I actually listen to the radio.
P

I've never heard anything but the choice GnR hits on the radio, and I never listen to the radio anymore. But I always marked out when Paradise City played on the classic rock station.
J

Guns N' Roses have been added to the lineup for this summer's Governor's Ball Music Festival in New York City. The rock legends join a growing lineup set to take over New York's Randall's Island on June 7-9.

This year Axl and company will take the stage alongside Kanye West, Kings of Leon, Nas, Kendrick Lamar, Animal Collective, the Avett Brothers, the xx, Beach House, Grizzly Bear, Edward Sharpe and the Magnetic Zeros, Feist, Death From Above 1979 and Crystal Castles.

It will be just the second U.S. appearance for GNR outside of their Las Vegas residency last year. They also made a stop at the annual Bridge School benefit in October.

The band hits the road Down Under with ZZ Top next month.
J

2 minutes of axl rose asking for some reggae [original]

Guns N' Roses have expanded their North American tour plans with the addition of two headline tour dates that will take place in June.
Axl Rose and company have announced a June 1st concert at the Lonestar Amphitheater in Lubbock, Texas and a June 2nd date at The in Kansas City, Missouri.

The band had previous announced appearances at several music festivals this spring and summer including Rocklahoma, River City Rockfest and Governer's Ball.

Guns N' Roses also recently announced plans for the release of "Appetite for Democracy in 3D". The concert film was recorded during the "Appetite For Democracy" residency at the Hard Rock Hotel & Casino in Las Vegas last Fall. The release will hit theaters as well as be offered on DVD and Blu-Ray.

Two versions of better, one acoustic by Ron thal, one a reimagining by Dj ashba
The other is called "going down" with Tommy Stinson on lead vocals, with axl on back up

Was going to go to bed but now I have to put it off for another 15 min at least. Do you have the link for Blood In The Water?

PS: Bumblefoot's version is obvs better than DJ's. That solo on the acoustic by Bumblefoot is RIDIC.

Jaxxxson Mayhem said:
Some of the songs are so good that they remind me that if the real Guns N Roses got back together they could still make some amazing music.
Click to expand...

are we getting a reunion kreese? if not for me then my bro chad numbers

I made some p. bad posts in this thread and if there is a reunion we should have a new one.

There are reports that this video is running in theaters before showings of Star Wars. I have no idea why they would do that, and it seems like a crazy waste of money. So it's quite in character for Axl.

Rumor has it that the reunion would consist of Axl, Slash, Duff and Dizzy but no Izzy, Adler or Sorum. Rather, current members Richard Fortus and Frank Ferrer would fill the rhythm guitar and drums slots respectively. If true, I'm not surprised that Izzy won't be taking part, since he hasn't toured in over 20 years (though I would expect occasional guest appearances like those he made with new-GnR in 2006 and 2012). And Axl has always hated Matt Sorum and has denigrated his musicianship over the years, but then again he's made similar comments about Slash. But Steven is going to be so crushed. Oddly enough, this wouldn't be the first time Fortus and Ferrer have been the ringers in a reunion, as they were both members of Love Spit Love, the band formed by Richard and Tim Butler of the Psychedelic Furs after that band broke up, and then when the Furs "reformed" a few years later, it was just the lineup of Love Spit Love plus one other authentic Fur. How comical.

Finally, there is heavy speculation that this reconstituted GnR will be a Coachella headliner this year. If so, the announcement will be on January 6th. Can't wait to beat.

Did something change? Can Rose actually perform now without being blown up within the first 30 seconds?
E

Is he still rocking dreads?

This post makes him a lot more relatable to me tbh.

Ed said:
Is he still rocking dreads?
Click to expand...

I really hope so. 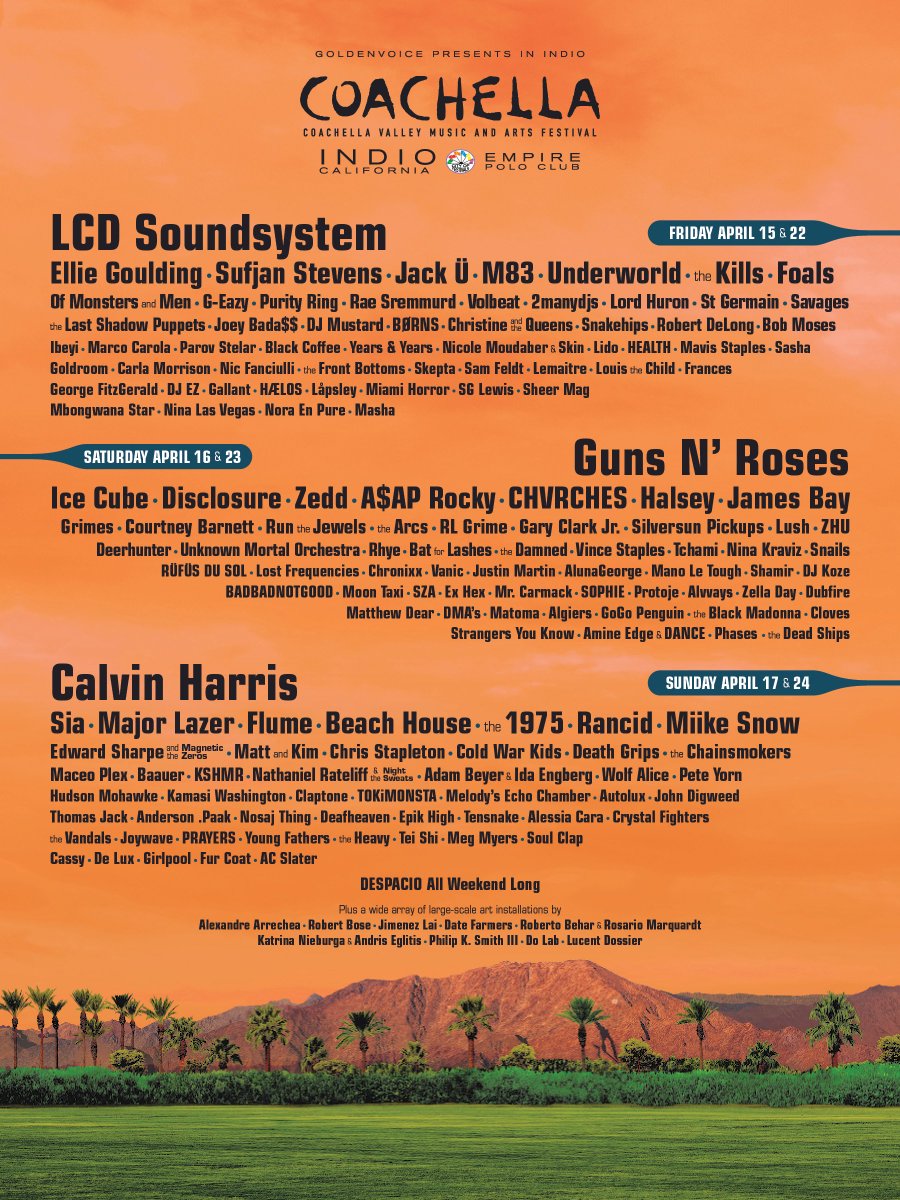