Way quicker than I was expecting. I thought it would be in January like the last few seasons.

Way quicker than I was expecting. I thought it would be in January like the last few seasons.
Click to expand...

The last couple seasons started in January the year after the previous season. Had they done January again it would have been two years since the start of previous season.

Looks a little too wacky maybe, but that's probably just the trailer. I am excited for whatever has Charlie dressed like Kramer and the all female Wade Boggs episode since it feels like Dee hasn't interacted with The Waitress and Artemis since Season 5 or so.

super jacked mac is gonna be so fucking crazy

That looks awesome, actually. Hopefully this season will be better than the last.

I enjoyed the premiere. I think Mindy Kaling is recurring this season? I hope she comes back as she was perfect in this.

Them constantly joking about Mac fucking the Dennis sex doll was hilarious.

I think she's only in this episode. This was an okay premiere. It was pretty meta with making fun of shows bringing a new character to replace a character and it just not feeling the same, but it was light on the laughs. Frank pulling out the gun, The Waitress nonchalantly saying she fucked the doll, and Dee's face at the end after Dennis said shut up bird were probably my biggest laughs. A little too much Mac imo. His new jacked physique looks great, but I found his performance kind of off or something and he was more annoying than funny. But, the episode did its job and got things back to the status quo. I wonder if anything comes up about


Dee saying Dennis left Mac a number to call that was a Mental Health clinic. Maybe that's where Dennis ended up in North Dakota and he escaped or something.

The next couple of episodes sound great based on the plot descriptions though.

there was some funny stuff in it but it wasn't anything special.

Mindy was very lowkey which made it all the more hilarious that there were so many outraged losers online freaking out that she was going to RUIN THE SHOW.

I liked episode 2 more than the first one, but the stuff with the guys didn't really work for me and all the men vs women stuff was really on the nose. Dee was fantastic and the bit with her discovering weird compartments in Dennis' room was hilarious and should've gotten more focus rather than the 6 minute dinner table scene with Charlie rehashing his speech from Pop Pop The Final Solution when he was on nitrous oxide. This is also the first episode that I noticed that Rob, Charlie, and Glenn in particular seem a little more tired or something. There delivery wasn't as snappy, Kaitlin was as manic and energetic as ever though. I know the cast (besides Danny of course) is in their 40's now, but it seemed noticeable with the three guys. I did love the ending with Dee getting a little victory. The final photo was kind of sweet and cracked me up.

I would use that picture as my wallpaper

Staff member
yeah i thought this was an improvement, and loved everything with Dee. Not a classic by any means but still fun. I love how Dennis just keeps getting more and more darker. 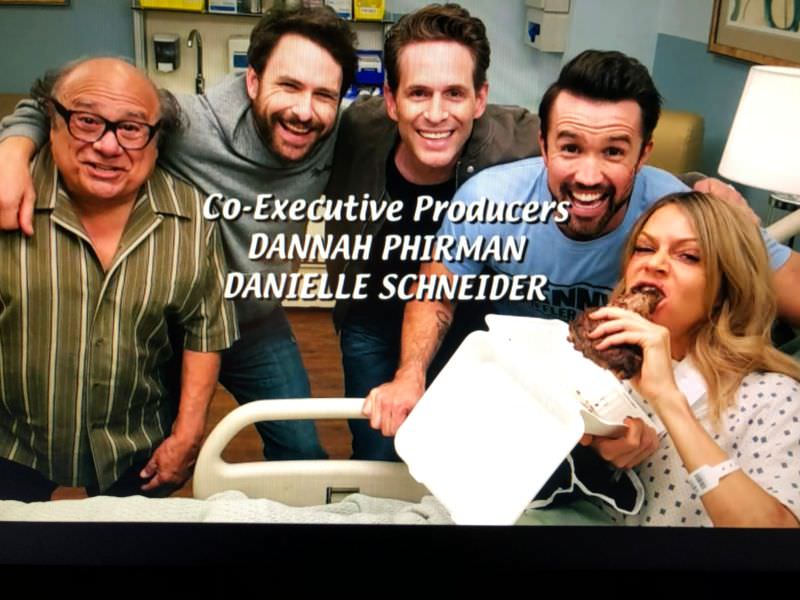 I thought this was the best one out of the three. Kaitlin was awesome in this episode and so was drunk Waitress. Dee's multi hallucinations had me dying as did her and Gail The Snail drinking and grunting at each other like a tennis match and Dee coming up with drunken mathematical calculations. Ending was really disgusting, but I'll never not laugh at Dee gagging and vomiting. Artemis was kind of annoying in this episode and having her basically explain the meta jokes to the viewer wasn't funny. The writing is really on the nose this season.
.

Just for the soyboybetacuck opinion, I went on reddit to see what they thought and a bunch of dudes were saying it was the worst episode ever. It's not a classic or anything and the show is long in the tooth now, but there were like 20 episodes from the last three seasons worse than this including the first two season 13 episodes.

Staff member
Yeah I really liked this episode, one of the better from recent seasons. Reddit sounds easily TRIGGERED. Artemis was annoying with pointing out the joke but I did like her selling the new age bullshit. The return of the Waiter was great too.

Agreed this has been the best of the three thus far.

Staff member
Brocklock called episode 4 the best episode in years in chat I think, and I've got to agree. So much stuff in this that had me rolling. Just to single one though is when they start setting up the scenario with "the customer" and "the waitress" and the way it starts dawning on Charlie and the gang. Totally made up for the way he'd been phoning it in up to this point.

Yeah, I loved this one. Just perfect Sunny satire. I thought everything Dee and Frank did was hilarious and the twist was pretty great at the end. They did a great job of bringing up old storylines like Charlie and Dee hooking up and Uncle Jack molesting Charlie and it didn't feel forced like it occasionally does when they shoehorn in old lines like Mac saying "Dennis is a bastard man" in the first episode. This was the first episode that Charlie felt like Charlie as well and not like he wanted to be somewhere else. Mac grabbing Dee by the pussy and Dee's reaction and then subsequent realization that she could use it to gain power was my biggest laugh of the episode.

Mac and Charlie beating the shit out of those kids was probably the most ridiculous moment in the series since the Jersey Shore episode.

I thought the fight scene was funny, but my biggest laughs were Dennis trying and failing to flirt with the girl with the hat and then Dee's rant about cucking that rich woman. The fight scene reminded me of a bunch of similar scenes on The Mick actually where random fights and violence would break out. Great episode though. Only episode I really didn't like this season was the first episode. So, they are off to a great start.

This week's may have been my favorite of the season so far. I appreciate the continued use of Soy Boy Beta Cock.

Staff member
this week's episode kind of sucked. It felt like something they've done a bunch of times (the gang solves blank) tied into a lame concept (half assed jimmy buffet fandom, charlie apparently has always had to dress as a woman to shit). There were a few funny lines in this and I liked Mac more in this than most of the episodes, with the ROID RAGE teases. That's about all the positives. Dee got shat on more than usual too.

I forgot nearly all of this episode right after it ended. Other than Frank’s gun (which has already been used a time or two this year) I’m really struggling to remember anything good.

Staff member
i liked the jokes about the constitution right after that scene with the gun. That was basically it for me too.

The online reaction for this is pretty positive. I thought it was definitely better than the Mindy Kaling and Escape Room episodes, but much worse than the rest of the episodes this season. It was an okay middle of the road episode. I didn't laugh that much though, but I still liked all the weird banter. Charlie not knowing how to use chop sticks was pretty great though. Dee getting shit on was kind of funny just because of how well Kaitlin Olson sold it. She looked absolutely crushed. The Mac roid rage was funny, but I still don't find the actor that funny this season. The four hours to go jerk off joke was pretty lame and I think it was a reused joke since there was another episode where he went to make a poster and it took him like four hours. I loved Dennis in this episode. I find him funnier when he's getting more and more annoyed with the shenanigans around him rather than ranting in a monologue or whatever.

Staff member
i didnt think there was anything in this as funny as dee in dennis's room or the video of dennis on the computer etc in Escape Room. I can see why someone might like this more I suppose but it was for sure a lesser episode.

I thought the Dee stuff in Escape Room was great and I wished there was more of that, but the Summit stuff with the guys went on for so long. Charlie's speech felt like it went on for five minutes. This episode felt a little more brisk for me.

I will say this episode might have one of the worst endings they've done. Just ending it with Animal Shithouse being put on the bathroom door felt so rushed and added in at the last minute.

Cross-dressing Charlie was the highlight of that episode for me but yeah, pretty forgettable otherwise.

Pretty lazy episode this week with the clip show and Inception stuff though I will never not laugh at Dee getting hurt. A big WTF to that Seinfeld parody.

Yeah the first ten minutes being an actual clip show was a bummer. I loved the Seinfeld stuff though. I watched the scene they were doing on youtube and it's crazy how meticulous and detailed it was right from the way Dee/Elaine was moving her hands and pausing while speaking and the guys at the window moved exactly the same as well. I wonder if they filmed more of that. It would've been a way better episode is they focused more on the altered memories/different timelines instead of spending the first half of the episode doing a clip show.

I did love the montage of Dee's physical comedy. Dee running head first into the car is still one of the biggest laughs I had on the show and I guess Kaitlin Olson actually screwed up her neck doing the stunt.

A Cricket's Tale from last year has some competition for worst episode they've done. Awful episode. Charlie Work is a classic episode that put you in Charlie's head, but this offered nothing new to the character. He just yelled, hurt himself, and lamely did Home Alone scenes for a very long feeling twenty minutes. The only laugh I got was Dee asking him how he managed to spell salmonella correctly. Hopefully the next two are good. I'm hoping that next season that is already confirmed is the last one. This season has had a couple of great episodes and the last two sound good, but I'm ready too see everyone do different things.
You must log in or register to reply here.
Share:
Facebook Twitter Reddit Pinterest Tumblr WhatsApp Email Share Link
Top