Yeah, Kamala, you're going to have to elaborate on that.

Paul Stanley asked the crowd to stand for the Pledge of Allegiance and he said it's always cool to stand for the flag and respect our troops no matter what people say! Then they played a rock version of the Star Spangled Banner.

Opener The Dead Daisies called out Colin Kapernick by name before playing a buttrock cover of "Fortunate Son". Which I mean. Missing the point of that song much?

Was it worth the money, Kamala?

…Gene, your memory is really incorrect!…I was NEVER FIRED from KISS, I quit twice (not 3-times) of my own free will, because you and Paul are control freaks, untrustworthy and were too difficult to work with!

…Your slanderous remarks about my bad habits over the years has cost me millions of dollars and now that I’m over 12-years sober you're still saying I can’t be trusted to play a whole nights show! Well that’s exactly what I’ve been doing for the last 12-years with different configurations of “The Ace Frehley Band” to you and Paul’s dismay!

…I’m also the most successful solo artist to come out of the original KISS lineup , and proud of it!…You and Paul have tried to derail my solo career multiple times over the years unsuccessfully.

…I’ve tried to be nice and friendly by inviting you and Paul to perform on my past albums for eOne Music, give each of you guys one of my prized Gibson Les Paul 59’ models, but today’s comments have made me realize you’re just an asshole and a sex addict who’s being sued by multiple Women, and you’re just trying to sweep it all under the carpet!

…The icing on the cake was when you groped my wife and propositioned her in Los Angeles at the Capitol Records building behind my back, when I was trying to help you out at one of your “Vault Experiences” which I only found out about several weeks later…she was planning on pursuing a suit against you, but I told her to call it off!!!

…Well now the gloves are off after your terrible comments today and I’m thinking that this really may be “The End Of The Road Tour” for you guys!!!

….Without a complete and heartfelt apology, an offer to give me my old job back, and removing Tommy from the Throne that I created… THE SHIT WILL HIT THE FAN AND THEY’LL BE NO STOPPING IT-IT’S ON!!!
Click to expand...

Ace just posted this on Facebook in response to Gene & Paul saying he was unreliable. Damn

Between this and the lame ass painting shit, I'm glad I'm saving my money and not going to this "Farewell" Tour.

Man, I was just watching an interview with Ace over the weekend where he harped on about how well he gets along with Gene these days. He didn't really say anything complimentary about Paul though and praised Peter Criss.

KISS is doing two dates in NYC, one in March and another in August. I gotta be honest, I am considering one of them since I've never seen them. But a part of me says that I'd rather wait for the impending Van Halen reunion with Michael Anthony.

I'd save your money for VH unless KISS puts their tickets go on Groupon. Last time I saw KISS in 2016, they were p. lame. Paul's voice is shot.

I saw Van Halen in 2015 and I thought they were pretty great even though DLR's voice is shot even worse than Starchild's. 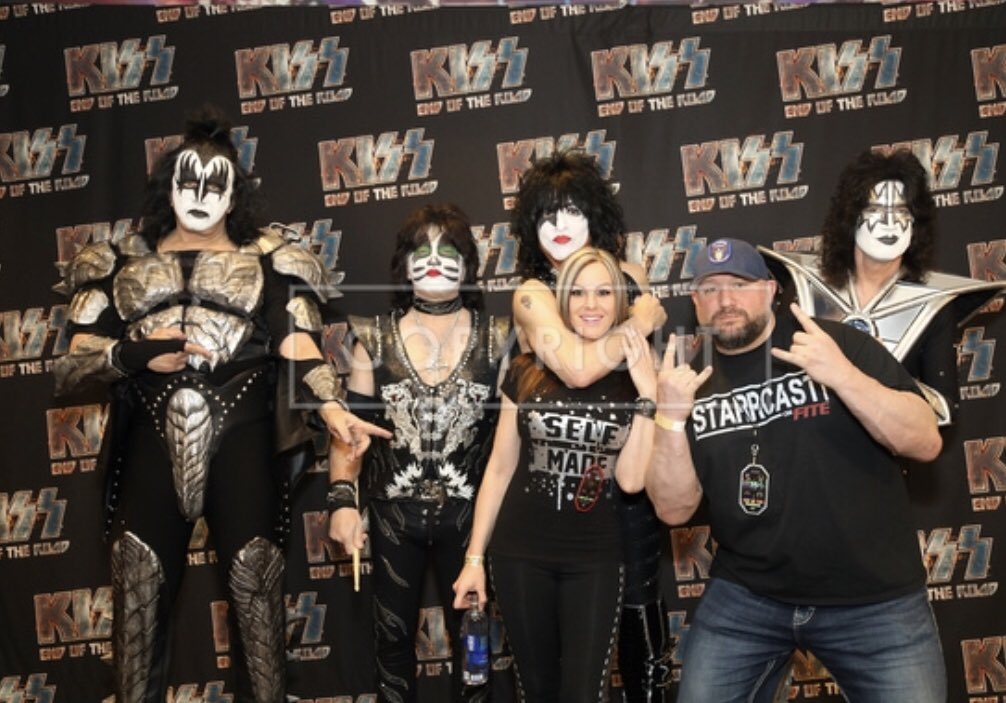 KISS look like they just watched highlights of Bully's program with Flip Gordon.

The MSG KISS show is this Wednesday. I keep checking StubHub for some $30 tickets but the cheapest I can find are $100 a pop and fuck that shit. I'm sure the price will go down during the day of the show but if anything there's always August at the Barclays center. Or just not go at all.

So I'm about 75% done with Paul Stanley's book "Face the Music" (got it for free from Prime Reading). A few notes:

- Him and Gene don't really seem like friends (shocker) but just strictly bandmates. Gene isn't talked about extensively at all which I find interesting. I understand this is about Stanley's life and not his but shocked that he's such a background character here. It's very clear from the start that Gene is only about the money while Paul is about the music.

- Ace and Peter are made out to be the most bumbling, incompetent fools. Paul takes many shots at Peter's musicianship and Ace's drug use. Very curious on what those two felt from their perspective. Ace is constantly cited as one of the great rock/metal guitarists but Paul thinks he was decent at best.

- It's cool reading about the 80s era including the non-makeup years.

- Yeah, the stuff about Bill Aucoin was fucked up. This is the kind of things most bands would sweep under the rug but they cut him loose right away. Gotta give them credit there.

- Reading about Eric Carr is sad. Dude had problems and wound up dying of cancer so young.

I've read up until the first farewell tour and Stanley starring in Phantom of the Opera. Let's finish this now.

Look Hot in the Shade is a pretty bad album but he doesn't deserve to get shot over it. WTH

Also I realized I never got around to writing about Sonic Boom and Monster. I really should finish this series...


If I'm feeling crazy, maybe I'll even write about the '00s and on KISS solo albums.

Actually, I don't know if I talked about Peter and Ace's 80s/'90s solo albums. Or THE VINNIE VINCENT INVASION!

At Barnes & Noble last night, I saw a new book about non-makeup era KISS with a foreword written by Chris Jericho.

HOW AM I JUST FINDING OUT ABOUT THIS!?

David Lee Roth has been announced as the opener on the next leg of KISS' "Farewell" tour. This pretty much kills all hope for an upcoming VH reunion.

Gene Simmons helped discover Van Halen and produced their demo so this is a much better choice than the god damn live painter they had for the first leg.


Unfortunately, I have a show the night they're in NH. KISS has been adding more '80s and on songs to their setlists so I miiiight renege on my promise to never see them again lol. They're in BANGOR next summer.


Also episode of Talk is Jericho with Eddie Trunk and the author of that oral history of non makeup era KISS I mentioned two posts back was fucking sick. I love earnest discussions of Crazy Nights and Hot in the Shade. Also knowing that his favorite era of KISS is the non-makeup era is almost enough for me to forgive Jericho palling around at Trump Tower a few weeks back!

I remember not totally hating Ace's album. Gene's was by far the worst.

Gene's is my 2nd favorite behind Ace's. It's corny as hell but I enjoy most of it. Paul's is a letdown but has a few killer tracks ("Wouldn't You Like To Know Me?" is probably my favorite song on all four albums). Peter Criss is not only the worst of those albums but probably one of the worst albums I've ever listened to.

https://www.instagram.com/p/B7CeLIuAvMI/?utm_source=ig_web_copy_link
Just got this in the mail and you can damn sure expect a review of it.

peter's solo album is the second best imo, and sometimes I feel like it's better than Ace's. You just can't appreciate brooklyn soul my dude. I know Kreese agrees.

No one appreciates blue eyed soul more than me but all this Peter Criss solo album praise is maddening.

Since we're talking about solo KISS, here's Gene trying break into the contemporary charts with a cover of a Prodigy song:

"Contemporary". Barely anyone cared about The Prodigy in the US after 1997 and Gene's 2nd solo album came out in 2004!


It also features the song he wrote with Bob Dylan and a posthumous collaboration with Frank Zappa (featuring all the Zappa kids and his widow). The Demon is eclectic if nothing else.

"Unholy" is the last great Gene Simmons sung KISS song if not the last great KISS song period (I might be alone in stanning "Psycho Circus". Album is garbage but I friggin love title track and think it does a great job of updating KISS to late '90s)

Agreed 100% on Psycho Circus. I thought it was about as good as you can ask for a late 90s KISS album. I actually don't hate "We Are One" and THAT was probably the last good thing Gene ever did IMO.

https://youtu.be/ogE21BgJbkA
Oh shit. I can't believe I forgot to point out that Chris Jericho has formed a non makeup era KISS tribute band with half of Trixter and Luke Bryan's drummer. That is a random ass grouping. Actual non makeup era KISS lead guitarist Bruce Kulick is going to join them on their next song.

My favorite aspect of Chris Jericho's personality is his favorite KISS is the non makeup era.