Did a quick search and realized we didn't have a thread for the Lego games. Seeing there's three Star Wars, two Indiana Jones, two Harry Potter, they just released the second Batman and Lordof the Rings coming this fall, I figured I'd throw up a general thread for these games.

I'm still a sucker for them and just got the new Batman one, as discussed by myself and bps briefly in e Lollipop Chainsaw thread.

Just popped in Batman 2 and all the characters are now talking, instead of the grunting and noises in previous franchises. Not sure how I feel yet, as some of the characters seem to be poor impressions of previous popular depictions.
K

I played the demo and thought it was good. I think they got most of the current voice actors for the characters (Joker sounded like Mark Hamill).

Luthor and Batman seem the same. Joker sounded like Hamill at first but the little more I am hearing sounds like someone doing an impression of Hamill. Riddled is a Jim Carrey knockoff. Two-Face I wasn't sure who it was trying to sound like and I think some of the cheesiness loses its charm with the actual dialogue. At least so far.

Think I was just caught off guard by it. Are they doing it going forward? Figure it is easier to do it in something like this than say, Lord of the Rings, but it would also be odd if they switch back and forth.

Ive been playing Lego Potter via my Iphone and its a bit tedious. I keep trying to pick up The Complete Lego Star Wars Saga for the PS3 (minus clone wars) but its just too overpriced atm.

I have the first Batman one, plus the Star Wars one that has the "saga" on one disc. I'm thinking of getting the Batman 2 one that just came out. These are one of the few types of games that my girlfriend will play alongside me (aside from Mario type games, etc).

I really like the LEGO games. I beat Indiana Jones 1, the first two Star Wars games and the first Batman. Only thing is I am an achievement whore, so its never too difficult, but I played pretty much all 4 of these back to back and I just got tired of LEGO games for awhile.

I wanted to check out Harry Potter and now the new Batman and LOTR one.

reaching for the sky just to surrender

Lego Star Wars: Complete Saga is definitely worth the price of purchase; you could even make an argument that it's one of the best "Star Wars" games ever released. The degree of difficultly isn't that steep, if you're looking for something more challenging.

I have that sitting on my shelf but haven't played it yet. Like HSJ said, you get Lego'd out. I beat Lego Pirates of the Carribean last summer, then didn't want to touch one for a while. Just broke out Lego Harry Potter II and knocked it down, but because I play to 100%, didn't have much patience for playing too long when trying new Lego Batman.

I played the original Star Wars some on the original systems. Tried out a little of Lego Star Wars II a little bit back but it is so noticeable going backwards. Lego Star Wars II was the first on current gen (well, 360, I don't know if it was even on PS3 or Wii or if they just got Complete Saga) and it felt so old and even slow compared to the polish of the more recent ones.
T

Wife and I are on Lego Batman 2.

As was said, not sure how I feel about all the talking in the vignettes.

Crushed Indy 1, Star Wars complete, Harry Potter 1 and 2 and Batman. Playing through the story is fun but I like the achievements that they put in especially on the Harry Potter ones. "Solid Snape" might be my favorite achievement ever.

I've previously 100%'d Batman, Harry Potter 1, Indy 1 and 2, and Star Wars complete saga. I have a little bit to do in Lego Star Wars 2...but knowing I won't get 100% on the achievements because I can't keep myself from dying in the stupid vehicles made me shelve it. I have the Clone Wars one somewhere that I bought for like 9.99 but I really haven't played it. I have Harry Potter 2 and Pirates from Gamefly but I don't know when I'll get to them. I might get into Potter 2 next since I liked the first one.

Anyone interested in either of the Harry Potters and hasn't picked them up yet, GameStop has them on sale for $9.99 a piece.

LEGO is also getting a new MMO: http://www.cinemablend.com/games/Lego-MMO-Coming-From-Funcom-44072.html

hile the Lego Universe MMO had to shut down with a quickness due to a general lack of interest from the masses, that’s not stopping Funcom from throwing their bucket into the same well. The developer/publisher announced this morning that it has signed a license agreement with the Lego Group to develop a new MMO set in the Lego universe (though not THAT Lego Universe) based on the Minifigures franchise.

Minifigures are exactly what they sound like: Smaller Lego figures that range the spectrum from businessmen and knights to astronauts and policemen. Lego builders use these figures to populate their creations, adding a bit of life to the static models.

According to Funcom, the newly announced MMO will be focused on accessibility, aiming to be something anyone will be able to jump into and enjoy.

“The market for family-friendly online experiences intended for children and youngsters is brimming with potential,” said Funcom CEO Trond Arne Aas. “This is source material we all know and love and we simply cannot wait to get started working with the Lego Group on realizing this exciting project.”

So early in the developmental process, we may not be hearing about this one again for quite a while. Or, they could throw enough people at the project to have something available to play by this holiday season. With these types of games, you can never really tell. It all depends on the dept and complexity they want to build into the game. Build into the game…Get it!
Click to expand...

They are really building off the success of the Lego stuff outside actual Legos. I'd be curious to see how popular the MMO is. I know saw Dreamworks is working on a Lego theatrical release about a Master Lego Builder and are featuring the franchises used in games, as Will Arnett was cast as Lego Batman and Channing Tatum as Lego Superman.

Baby Shoes said:
Anyone interested in either of the Harry Potters and hasn't picked them up yet, GameStop has them on sale for $9.99 a piece.
Click to expand...

Guess it was an error or short term sale, as it is up to $15 now. Still not bad.

Baby Shoes said:
Anyone interested in either of the Harry Potters and hasn't picked them up yet, GameStop has them on sale for $9.99 a piece.
Click to expand...

Lego Marvel is phenomenal. Especially if you're a comic fan. It's the best Lego game yet...just pure fun.

I have it sitting on my table because there was some geek out stuff in in the trailer and Toys R Us had a gift card deal but haven't played it yet. I was irritated with some of the overkill junk in Lego Batman 2 I didn't open my Lord of the Rings yet either.
T

First Lego game I've ever played. LOVE IT. Put in about 30 hours so far just unlocking all sorts of obscure characters. 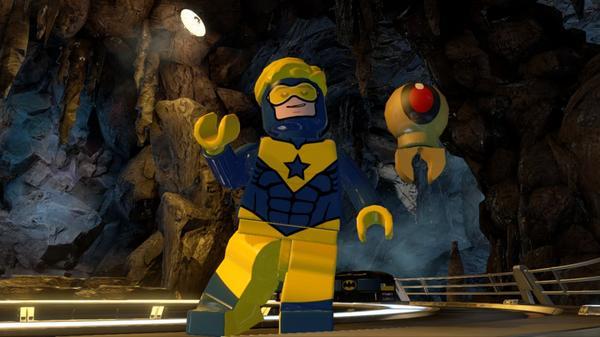 Two new Lego games announced, I think both for this year.

Lego Avengers, which will be based on the Marvel Cinematic Universe, seeing Lego Marvel was already super in-depth.

The other? Lego Jurassic Park. Will cover the first three movies and the new one. Don't know if I am more excited for Lego Jeff Goldblum or the hope of seeing Lego Newman getting eaten on the toilet.

Newman didn't get eaten on the toilet. Newman got acid/poison sprayed when he was in his SUV.

Anything is possible with Legos, including but not limiting to, changing who gets eaten off a toilet from a 20+ year old movie
B

Surprised they are pushing it until after Christmas but rumor is the studio doesn't want to interfere with sales of that Lego Dimensions game.
T

I'd like to see a Lego Back to the Future game.

It's going to be part of LEGO Dimensions.

Supposedly this is going to "fill gaps of events" between Return of the Jedi and this film. Can't wait for the comedic spin on
Ren turning on Luke

Debating picking up Lego Dimensions. Best Buy has a sale exclusive for Gamers Club members (which usually tends to match their later Black Friday prices in most cases)

Isn't technically a Lego game but this is probably the best thread for this.