Post pictures of wrestlers in your local low-rent indy fed

Haha. I thought I was going crazy for a minute. Caleb is an awesome dude, and I'm still pissed Impact dropped the ball with him.

Wes Brisco is wrestling Dirty Daddy at that Pro Wrestling Experience show I posted about a few weeks back. A TRTSM Indy Dream match if there ever was one.

Book Lenny Dykstra for the next Spring Break Clusterfuck

I can't wait to hear about how Lenny and Sonny got along.

Going to my first indy show since last August I believe. Meng and the Barbarian are going to be the guest stars. Plus the local debut of this beast:
https://www.facebook.com/uselessdrunk?viewer_id=541572805

"Who has or can get ahold of some injectable lidocaine for me by Wednesday the latest. I need to cut something out of my head before I leave for Japan. Holler at me."

Also I'm 99.9% sure that's just a photo of the actual Ultimate Warrior

EDIT: I guess this might be an old flyer and I'm a doofus!

Forgot to post this last week. I went to my local indy which was headlined by Powers of Pain vs Nick Gage and Matt Tremont. Before the show there were comes meet and greets. The Warlord came to the show wearing this shirt...in NY.

Bix was tweeting about that show and said the fans chanted "Dem-o-crats! Dem-o-crats!" during PoP's entrance

After watching that... maybe I should go to this group's shows.

After watching that... maybe I should go to this group's shows.
Click to expand...

It's really heartwarming that Brian Christopher's death has not affected his bookings. 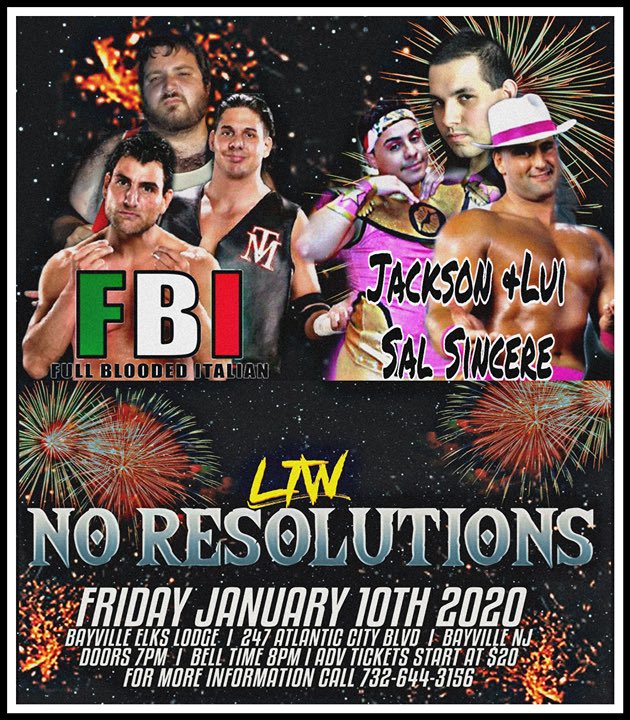 Wow, had no clue Tony Mamaluke was still around. The FBI vs. Whipwreck/Tajiri matches were the best thing about ECW in 2000.

https://411mania.com/wrestling/global-wrestling-federation-returning-for-one-night-only/
They're doing a GWF Reunion Show in Irving, TX in May.

No disrespect to Stevie Ray (Suckas Gots To Know), Rod Price, and "The Pug" Alex Porteau...but who the hell wanted a GWF Reunion (especially one without any Lightning Kid cameos) in the year of our lord 2020.

AND ARE WE EVER GOING TO GET A DANG WCW REUNION SHOW!?

Sty Guy Kamala said:
No disrespect to Stevie Ray (Suckas Gots To Know), Rod Price, and "The Pug" Alex Porteau...but who the hell wanted a GWF Reunion (especially one without any Lightning Kid cameos) in the year of our lord 2020.
Click to expand...

Me. This is definitely relevant to my interests. I doubt I can swing the travel expenses, but damn it isn't a doable drive.

One of my newer friends has secured a gig on the ring crew for a local low-rent indy fed. He's meeting with them the day before a local show and they're going to work him out to see if he's wrestling material. He has high school sports, boxing, parkour, and some martial arts in his background (I forget which one) so I'm hoping he can realize his life long dream, even on the small scale. I keep trying not to badger him, but I'm being the overly cautious friend that keeps warning him to make sure they're willing to teach him and not just use him for a tackling dummy. If they try to break his leg on day 1, there's a problem. Clearly there's going to be rookie hazing and making sure the guy really wants it, but he's verrrrrrry trusting. I don't want to see this dude get taken advantage of. I also know nothing about this company he's meeting up with so there's that concern.

Either way, a few of us are going to attend the show where he's setting up the ring. Even if he's not performing, going to support a fellow fan making that leap.
T

Some fantastic indy wrasslin’ names and looks on this card

I was talking to the owner of Synergy Wrestling and he was going off on that show, ripping it for having Super Humman vs some other YouTube guy.

Speaking of Synergy, I'm going to their show next month, and they added Joe Gacy vs Anthony Greene to the show. I'm stoked to be seeing our friend Anthony live again.

Did they just pick three names out of a hat? Trying to imagine the three of those guys in a car together...

Oh shit! Honky and his fake Patriot! I wish I had!

I would go to this under normal circumstances.