I'm hoping they give in and grant an Undertaker hearse.

Psyonix has been purchased by Epic. Not sure if anyone here still plays this, but I'm worried about what this could mean for the future of the game.

Hopefully it won't be anything TOO egregious, but it's always a risk when one company buys out another that they'll fuck everything up. Considering this is the game I've played the most this gen, easily, I hope it doesn't get ruined.

Steam version will be removed late 2019 when it releases on the Epic store. It will still be supported, but supported only so if you like a new car or want that new Pass you'll need to switch over to Epic (meaning you lose everything). And with the Epic store, you can't trade so no chance in hell of trading with someone if you've got a cool something they want and they have a cool something you want.

They are trying to walk it back as a lot of the fanbase is pissed over this. Oh don't get me wrong, there are people going "why are you so angry, this can't be anything but good", however a lot of people feel betrayed because they felt like Psyonix was the little Indy that did it. They gave money for keys, passes and stuff because of that.

As for me, I'm probably out. Between this and Gearbox CEO's insane outburst, I don't exactly trust anything Epic.
F

Have they officially said that the Steam version is going to be removed? I know it was reported that it would be, but then Psyonix semi-denied it, saying no plans had been made yet. I play on PS4 so hopefully I'll be minimally affected by the changes, and so long as the gameplay doesn't get affected I'm sure I'll continue to play it. I'll determine down the road if I feel comfortable buying any more Rocket Passes.

It took them 4 days to walk back the removed from Steam comment from Variety, so yeah. I ain't buying that they'll just play nice.

I've been chatting with my friend about it and the only positive I can see would be post-match dance routines added. I don't fear for any game-breaking mechanics change, of course, but knowing how Epic likes to fuck around with the playerbase (and now this idea of banning trading?)...ehhhhhhh...

Epic Store doesn't allow for any way to trade, so everyone else will likely lose it when it swaps over.
F

I just find it hard to see them dropping trading entirely, because that would greatly cut into the number of people who would buy keys. A large percentage of the people who open crates do so because they're degenerate gamblers who want to get the big hit that they can sell to others for large amounts of keys. You eliminate their ability to sell their items, they're gonna stop opening crates.

Maybe the Rocket Pass was a test to see if the playerbase would go along with that kind of premium content? I've dropped probably $50-60 since the game launched between keys and special cars, but I also got on board when it dropped and was free for a month.

Regardless, I just hope Epic doesn't fuck this up. This is a daily play for me and has been for years.

So, I'm posting in this thread, because the Dec 4th update has arrived with there now being and Item Shop and Blueprints and well. Blueprints don't give you items. You have to pay to unlock them. Things like the Black Market stuff cost $20 to own. Apparently the DLC cars like Batmobile and those now just tosses you into an blank slated Octane.

I find this entirely depressing. I was thinking "oh cool, Blueprints will be like just get the blueprint and boom, you can have it". Nope. So yeah. No reason for me to buy anything and frankly, I think I'm done with the game.

Sadly, when it is in the Epic Store, it'll make all the money in the world because Fortnite does.

Same. I've been a player since it came out and seeing stuff I paid money for now become free to everybody, as well as not being given in game credits for items I've unlocked prior, is some fucking bullshit.

It's still a fantastic and one of a kind game, but this is the kind of move that is going to piss off a LOT of the core playerbase.

Yeah, it really is. the biggest kicker is that it used to be 23 keys (2300 credits) would give me 23 items and I used to be able to get good items on the chance.

Now it is 23 items for a single item. Like what the hell. How was this pricing model supposed to be better?

I mean, fucking hell. It really is sad when a gacha game (Azur Lane) I play treats me better than Psyonix right now is.\

I get that they want to make more money, but this isn't it chief.
F

I haven't been playing much RL lately due to just not having enough time, but seeing about this update really demotivates me even when I do have time.

Psyonix and Epic still haven't talked, so yeah. What a great developer and publisher. Two days and still notta

And it looks like those prices they have listed is what they actually made on each item. Or so the thinking is going. Meaning that while everyone would pay like .5 dollars for a Zomba, they actually were making Rocket League like 20$ per tire.

That actually makes me sick to think that they used the amount of keys that were spent to determine that.

They also apparently have killed the 'free' trade market, because you can't even trade credits, so that's also bumped those prices up to insane amounts. 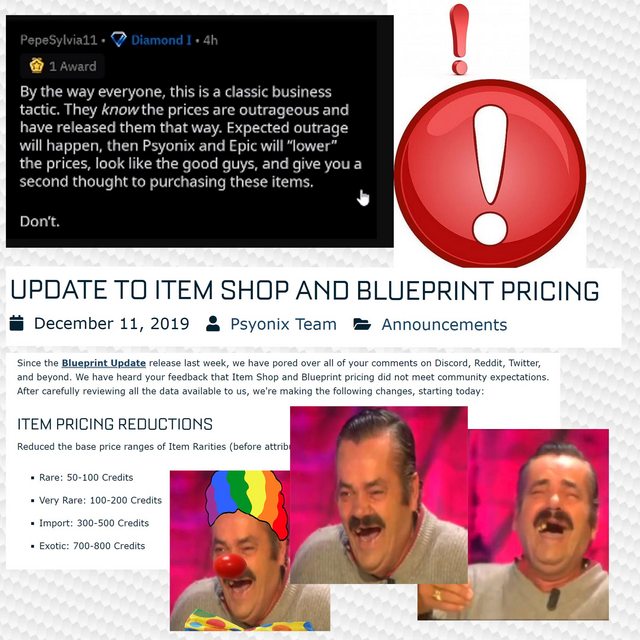 Not only was that person right, for people who knew of how these things are done, we knew they would do that.

So not surprising, but still infuriating that they did it and they clearly want to be seen as the "oh we did it for you" guys.