First thing I played when I opened this thing. MOTHER FUCKING. SNOW. BROTHERS. I fucking adore this thing.

Have I heard of the game before?
No.

What is it?
A mid 90s motion capture fighting game that isn't Mortal Kombat.

How much did I play?
Half a dozen matches.

Thoughts?
Oh man now this is what I'm talking about. 1990s motion capture games that aren't Mortal Kombat are almost always hilariously bad, and this is no exception. The graphics for these things looked stupid in the 90s and they look really dumb now. Bad controls, bad hit detection, blood on every hit (depending on the character, it's a stupid explosion type effect for some), it's all here! To be fair the controls aren't awful, as at least I could make my guy do what I wanted most of the time, which isn't the case in a lot of these.

There are nine selectable characters, and three of them are Jackie Chan. I'm not kidding. It's Jackie Chan just in a different colored outfit. There's also a guy in a Dragon suit you'd see at a Chinese New Year celebration named 'Mysterious Lion'. You beat Mysterious Lion and there's blood gushing up as he's on the ground. You beat Jackie Chan and he just kneels down, gives a thumbs up, and says 'getting better!' Fuck you Jackie, you should bleed like the lion, who is obviously a guy in a suit. I don't really get why the lion suit guy makes blood but others don't. Anyway, I managed to win 5 matches with Mysterious Lion by literally doing nothing but jumping forward and hitting strong punch. Go me. Oh and there's a super meter and when it was full and I mashed the right buttons Mysterious Lion turned into a smaller version of himself who...couldn't really do anything? O....k.... 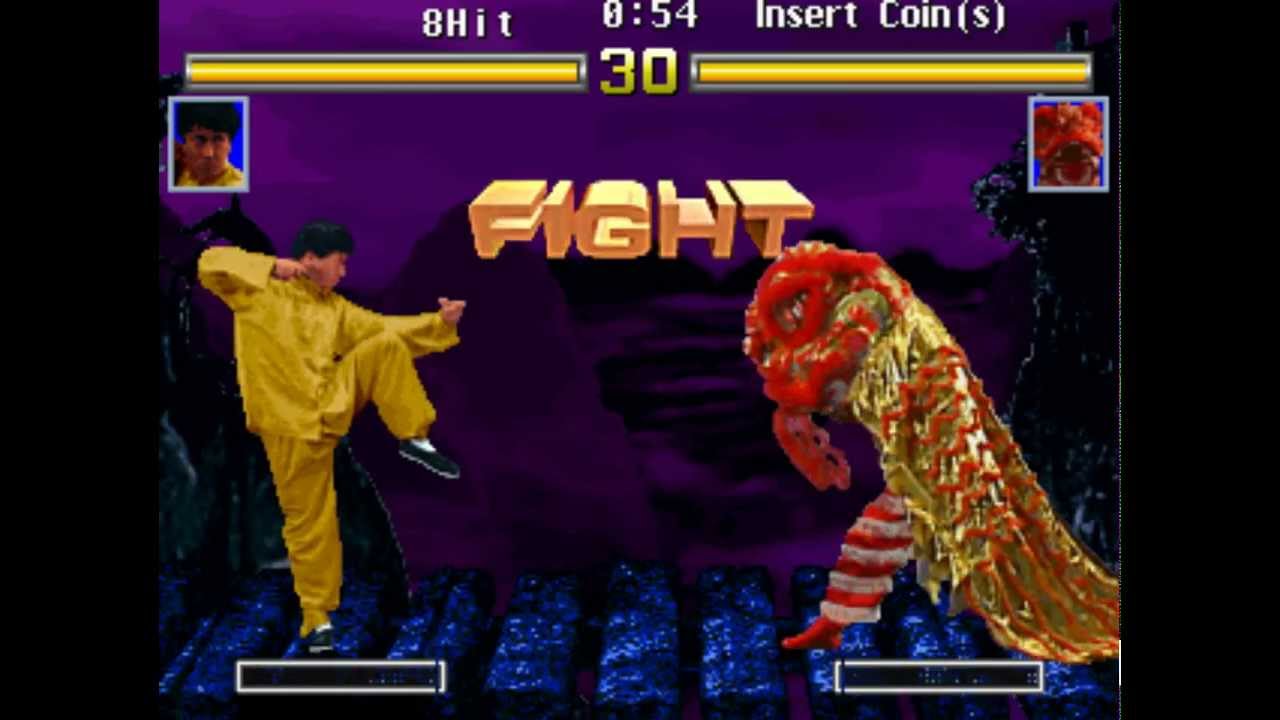 Also also, this is a sequel and there's another one of these on the machine. Can't wait!

Any Engrish? Or any memorable quotes?
I'm Jackie Chan this is my game! 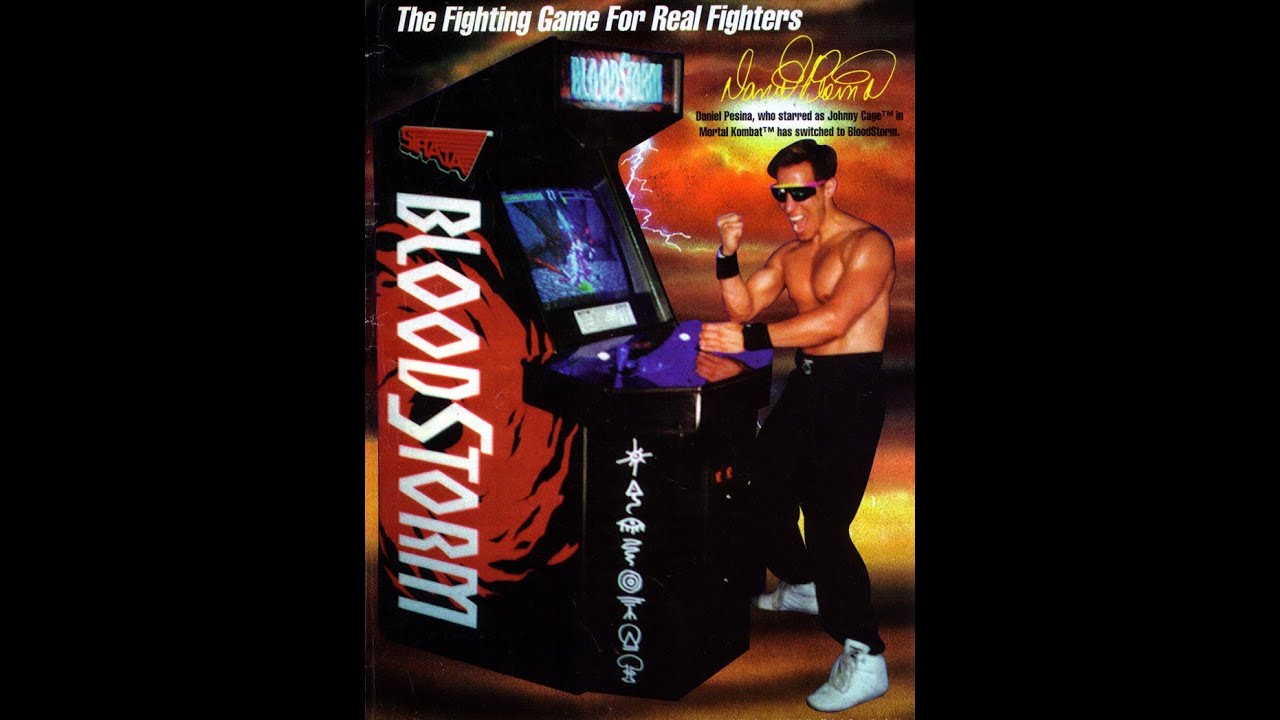 Have I heard of the game before?
Yes, because of the imagine above and the idea it was going to be better than Mortal Kombat.

What is it?
Another Mortal Kombat inspired fighting game from the 1990s, but not a motion capture one.

How much did I play?
Half a dozen matches or so.

Thoughts?
LOL JOHNNY CAGE. Beyond that, the game sucks but it's not that awful. It feels like it might have some depth with collecting arms as you win, but I'm not confident about that. Man though does it try to be edgy though. There's blood everywhere and you can knock limbs off and for some reason even do fatalities after the first round. Then your opponent is still alive for round 2. It's stupid. But hey BLOOD MURDER BLOOD BUY MY GAME!

Any Engrish? Or any memorable quotes?
No.

Fun fact: That ad was the reason Johnny Cage wasn't in MK3. Midway fired Daniel Pesina for his involvement in the game.
T

Thrasher said:
Fun fact: That ad was the reason Johnny Cage wasn't in MK3. Midway fired Daniel Pesina for his involvement in the game.
Click to expand...

Funny enough, this post made me google Daniel Pesina and an article featuring an interview with him came up. He said that he was fired due to suing Midway, Nintendo & Sega over likeness rights. Once he lost in court, he did this ad for BloodStorm, but outright stated he was already gone from the company when he did the photo shoot.

Thrasher said:
Fun fact: That ad was the reason Johnny Cage wasn't in MK3. Midway fired Daniel Pesina for his involvement in the game.
Click to expand...

Funny enough, this post made me google Daniel Pesina and an article featuring an interview with him came up. He said that he was fired due to suing Midway, Nintendo & Sega over likeness rights. Once he lost in court, he did this ad for BloodStorm, but outright stated he was already gone from the company when he did the photo shoot.
Click to expand...

To add to that Kitana, Sonya Blade, and Shang Tsung sued Midway over royalties for MK2 and lost. Those characters were portrayed by different actors in MK3.
https://en.wikipedia.org/wiki/Controversies_surrounding_Mortal_Kombat#Philip_Ahn,_Elizabeth_Malecki,_and_Katalin_Zamiar_v._Midway_Manufacturing,_et_al.

Staff member
FINALLY got my arcade reconnected after I tried and failed to set it up with the Pi. Not likely ever going to try that again because re-wiring it is a bitch. I still need to re-wire player 2, but I got all the buttons for player 1 hooked up so I'll be playing through the list some more now. 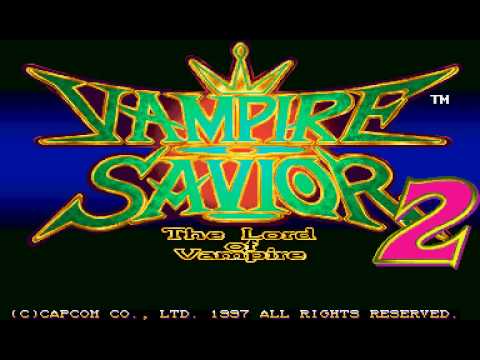 Have I heard of the game before?
No, but I recognized several of the characters from other Capcom games.

What is it?
A one on one fighter from Capcom. There's vampires and shit. I don't know what the story is because it's in Japanese.

How much did I play?
A dozen or so matches. I even beat the boss!

Thoughts?
This was a very pleasant surprise. I'm not a huge fighting game fan, mostly because I suck at them, but this was surprisingly easy to pickup because it's a Capcom game. If you can play Street Fighter you can play this, but it has some key differences that kept it fresh. Instead of your usual best 2 out of 3, you each get two health bars and combat just stops for a brief second when one is depleted. No mid-round break where the other player heals, just get the fuck back up and go. A bit of health will also heal over time, a mechanic I've seen in tag games but not solo fighters. The health gages also deplete right to left instead of left to right so that was fucking trippy.

I enjoyed this, might even play it again. And JESUS CHRIST the boobs on Morrigan. Put a bra on girl, those are really gonna hinder your fighting ability. I've seen her in Puzzle Fighter and Project X Zone and always wondered what game she came from, so now I know.

Any Engrish? Or any memorable quotes?
No because it's in Japanese.

That's actually a version of Darkstalkers 3, alongside Vampire Hunter 2.

Staff member
I upgraded to a Pandora's Box 6 for the capability to add my own games, but thus far that part has been a letdown. Of the games I've tried only Golden Par Golf, which was on the 5 but for some reason not the 6, and Ironman Stewart's Off-Road Challenge have played well. For some reason Spider-Man runs at about 5 frames per second, which is weird given how old that game is, and most games I've tried just flat didn't run. Oh well. The 6 has more games then the 5 though so there is that. My plan is to keep playing through the 5's game list through since that's what I started with and I want to live up to this threads title. Have I played the game before?
Not 'Set 2', but yes, many times.

What is it?
Presumably a rom hack of Street Fighter 2: Champion Edition. Projectiles are homing and move at all sorts of speeds, some moves can be done in the air, and E. Honda can random turn into Guile mid-match. It's weird.

How much did I play?
A couple of fights. Eat my ass E. Honda.

Thoughts?
I don't like these rom hacks of Street Fighter 2. Adding something like mid-air moves would be neat. Having E.Honda throw out three homing fireballs when he does his hundred-hand slap is not so neat. I managed to win one round, over Guile but he started the round as E. Honda. Because that makes sense. Just give me Vanilla Champion edition and I'm happy.

Any Engrish? Or any memorable quotes?
No. 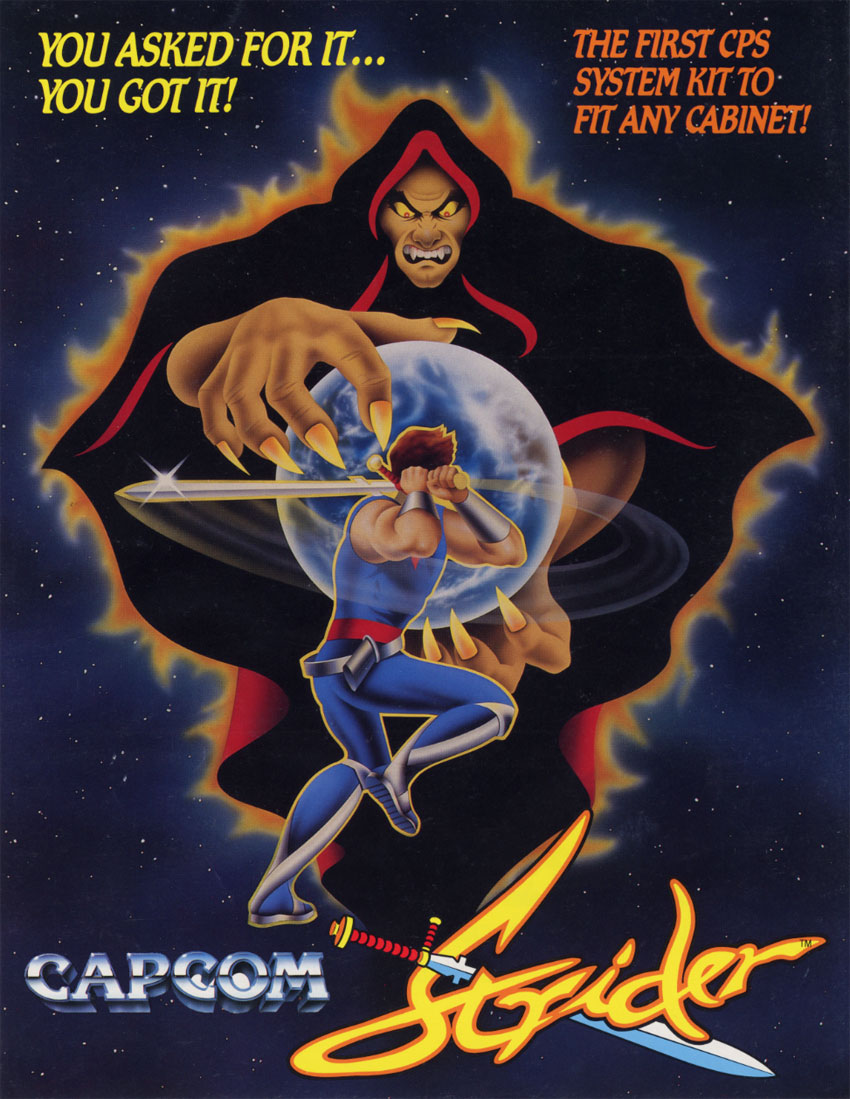 Have I heard of the game before?
Yes. I'm not sure from what, probably Gamepro magazine.

Have I played the game before?
Possibly but I'm really not sure.

What is it?
A hack'n slash platformer. You're a ninja of some kind and have a big ass sword. You can climb on walls and ledges and such.

How much did I play?
A couple of levels before I got stuck.

Thoughts?
I'm wondering if I played this is a kid and just don't remember it. Nothing came back to me when I played it, but when I hear the title I feel like I used to know the game really well. It's a weird feeling. I remember we read a book in fourth grade called Strider and I was hoping it was about the video game. Anyway, this seemed fun before I got stuck. It's obnoxious how enemies keep spawning from the left so you're constantly stopping to turn around and slash them, and you take a lot of cheap damage. Like an explosion that killed me when I had 1 hp left, but did 0 damage to me when my health was full? I do appreciate the large area of attack you get with your big ass sword and it makes for a lot of fun killing bad guys.
THREE OUT OF FIVE STARS WOULD PLAY AGAIN.