From THE PAPER INDUSTRY to THE SPACE INDUSTRY

The teaser didn't grab me but the trailer is much better:

Didn't realize Fred Willard was in this. This will be a proper send off.

I watched three episodes and I don't like this at all. The satire is very bland and dull. If they went more in an approach like the movies In The Loop or The Death Of Stalin it would be great, but it never gets too absurd and ridiculous like it should. The cast is amazing with some great guests in the episodes (Patrick Warburton, Kaitlin Olson, Jane Lynch, Lisa Kudrow, Noah Emmerich) but the material just isn't very funny. The script lacks any bite and I barely laughed. If Steve Carell and Kaitlin Olson are on screen together and interacting I would think it should be hilarious, but the script is so boring that I barely cracked a smile. Carell is really the only character I found kind of interesting and any time it went to the other storylines with Ben Schwartz or the actress playing Carell's daughter I found it really bad.

I got one further than Brock and my sentiments are pretty similar. There were a couple things here and there that gave me a smile but it feels like a show that can’t figure out what it wants to be. The daughter character totally makes the show drag. I was going through some of the news from my phone while the show was playing so I thought I missed something when
Lisa Kudrow was in prison
. From what I gathered it gets explained later? Early on it feels like one of those shows that relies on what random person shows up, kinda in the style of when 30 Rock got rough in the end.

I’ll finish the season and I’m sure they will bring back another. Can only hold out hope it is like
Parks and Rec where it starts off rough before getting really good.

This is a big spoiler for the fate of that character in your spoiler Baby Shoes.

One of the big complaints of the show I keep seeing is that it is never explained why Lisa Kudrow's character is in prison.

I watched one more episode and yeah I'm not gonna watch any more. I was trying to give Carell the benefit of the doubt and even he is kind of bad on it. He sticks with this weird voice that sounds like he's trying to do a Humphrey Bogart impression or something and the facial expression he keeps doing isn't very funny 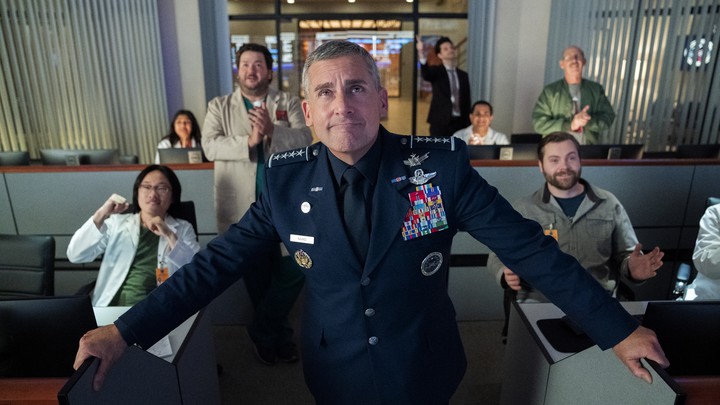 John Malkovich is the best character of the bunch I believe and even he is mostly doing his usual thing.

I watched the rest tonight. Not worth going out of the way for but I’ve seen worse. I think the later episodes were slightly better than the earlier ones. Malkovich being Malkovich is a highlight. I did like
the relationship that was blossoming between Ali and Dr. Kaifang
but there wasn’t much time spent on that.

In regards to what you shared Brock, I didn’t read that til I finished the shows but found
a Greg Daniels interview where he said he and Carrell thought it would be funnier to not explain it. Seems like a poor choice but he said maybe they’d reveal in the future.
I will reiterate that I feel like some of the floundering to find a direction and a voice. And the daughter character feels like the biggest issue on the show. There’s enough talent they could retool it to make it better but I also do not feel like they would be motivated to.

My girlfriend was watching this while I was on my lunchbreak yesterday. It seemed like a Christopher Guest movie where they forgot to add any jokes. Nothing worse than seeing a great comedic cast go to waste so I think feel safe in skipping this one.

A Christopher Guest movie without jokes is a perfect description of this.

I'm halfway into the series and I'm gonna echo the rest of you guys. The humor is more, I don't know, "dryer" than what I was expecting. There are no major "laugh out loud" moments and too many characters I just don't care for. Malkovich and Jimmy Yang are the reason I'm gonna see this to the end.

I much preferred Upload as a new Greg Daniels series.

Baby Shoes said:
I will reiterate that I feel like some of the floundering to find a direction and a voice. And the daughter character feels like the biggest issue on the show. There’s enough talent they could retool it to make it better but I also do not feel like they would be motivated to.
Click to expand...

I read somewhere that the show came from Greg Daniels and Steve Carell basically being like "hey, Trump's space force is absurd, let's make a show making fun of it" and really it's hard to do a parody of anything Trump does. Trump himself is already a parody and it's not a funny or interesting one.

It sounds like all they had was the main idea and couldn't think of anything else. Greg Daniels' bread and butter is work place or slice of life comedies with a mix of relatable and absurd characters, but this just seems out of his element. This needed to have more of a biting and vicious comedy style. He also had some incredibly talented people with him on the writing staffs as well as co show runners and this lacks some of those guys creative imput.

I probably should put this in some political thread but this show is doing some good. They basically have some trademarks that will be prohibitive to Trump’s branch

Space Force dubbed good enough to get a second season, we guess

Netflix has renewed Steve Carell and Greg Daniels' fitfully funny Space Force for a second season; John Malkovich, Ben Schwartz, and the rest of the series' absolutely fantastic cast are all expected to return.
news.avclub.com
Yeah. Alright. Whatever