Not sure if this should go here but Twin Peaks is coming back for 9 episodes on Showtime.

Staff member
Totally deserved its own thread... any more details?

UPDATED: Twin Peaks fans’ quarter-century wait is over. One of the top cult series of all time is coming back with a new limited series on Showtime from its original creators, David Lynch and Mark Frost. The nine-episode series will go into production in 2015 for a premiere in 2016 to mark the 25th anniversary of when the series finished its run on ABC. In a fact that will delight Twin Peaks devotees, Lynch and Frost will write and produce all nine episodes, with Lynch set to direct every episode.

DAVID LYNCH;PRODUCER MARK FROSTThe new Twin Peaks will be set in the present day, more than two decades after the events in the first two seasons. It will continue the lore and story of the original series, with Lynch and Frost committed to providing long-awaited answers and, hopefully, a satisfying conclusion to the series. It is unclear which actors from the original series will be featured in the followup. I hear that star Kyle MacLachlan will be back, reprising his role as FBI Agent Dale Cooper who was at the center of the show. The ABC series also featured some of Lynch’s favorite character actors, and it is likely that at least some of them will return. Leading to the 2016 debut of the Twin Peaks limited series, Showtime will re-air the first two seasons of the series, owned by parent CBS Corp.
Click to expand...

I've still never seen the 2nd half of season 2.

Gonna post a lot of GIFS in this thread when I get home. Twin Peaks is one of my favorites, even the truly odd and misses-more-than-it-hits back half of the second season.
P

Aside from a handful of episodes, I've still not watched this show in its entirety since it first aired #oldfart

I'm a little leery with Showtime airing it instead of HBO/Netflix, but I believe in Lynch.

With Season 2, I would stop after episode 9 Arbitrary Law and watch the last 4 or 5 episodes. The finale is legit terrifying.

I wonder if Twin Peaks restaurants will have Twin Peaks viewing parties. Well, they've updated it. Turns out Lynch left the show because he felt Showtime wasn't ponying up enough cash to do the show right, but Showtime is still helpful something can be worked out.
P

Dear Twitter Friends, the rumors are not what they seem ..... It is !!!
Happening again. #TwinPeaks returns on @SHO_Network
Click to expand... 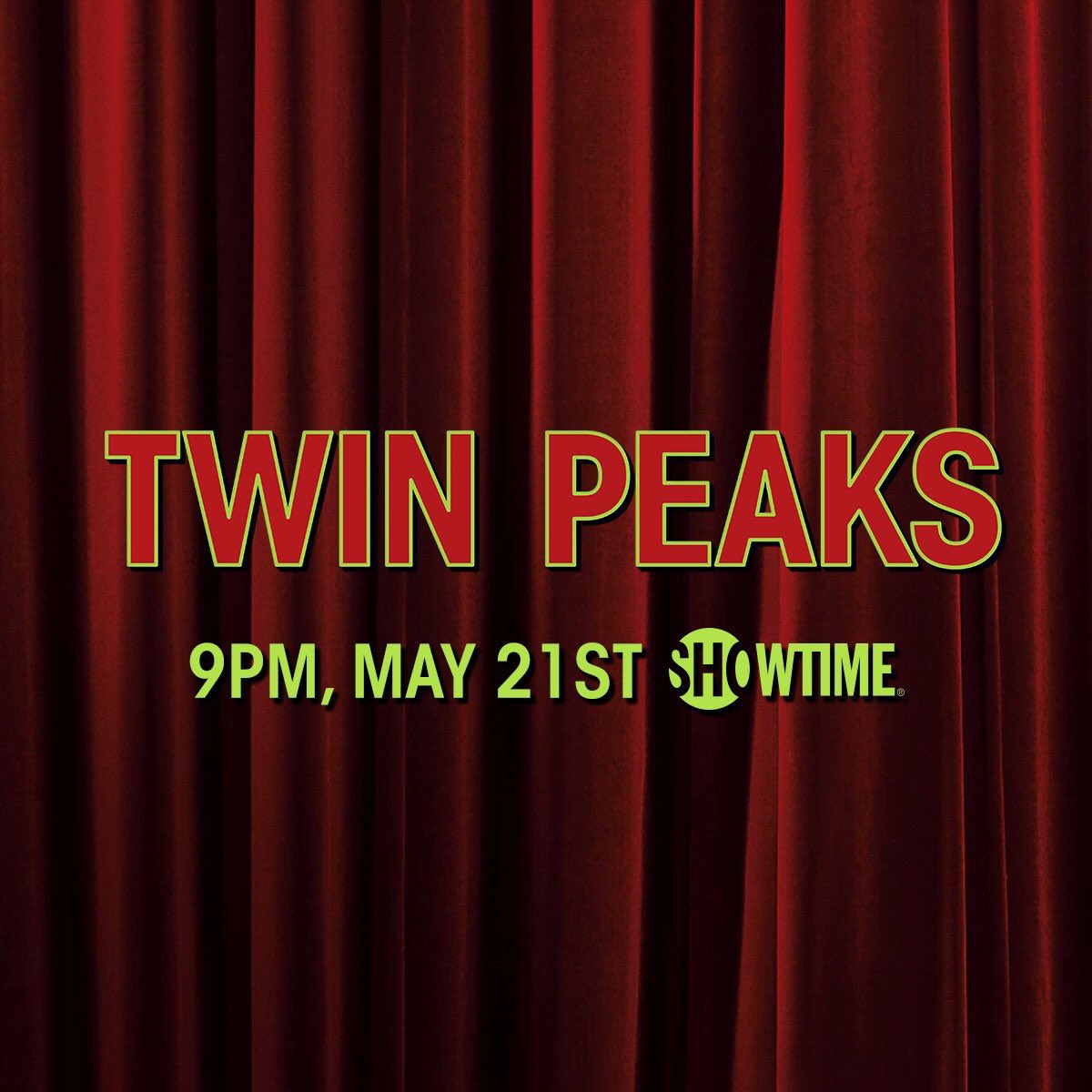 I just saw FWWM for the first time in a theatre. I've seen the show, but never the movie. That was... definitely a David Lynch movie. Yup.

Also, I didn't see it posted here but the episode count was bumped from 9 to 18:

Lynch filmed the entire season as a movie, with a decision made later how to cut the material into episodes, so the exact episode count had been in flux. “It will be 18 unforgettable hours,” Nevins said.
Click to expand...

The vibe I'm getting from the promo material is that the show is going to be more along the lines of Fire Walk With Me or some of Lynch's darker movies like Lost Highway than the tv show. I don't expect to see a lot of comedy which was kind of hit and miss on the show to me anyways. But, I could see that pissing people off.

Yeah, a lot of my friends are suspecting the same thing. Especially given FWWM is what you get when Lynch isn't restricted by a network like ABC.. and since Showtime is basically and HBO-like channel, then all bets are off.

Never seen the original series, but thinking of starting of. How does it hold up with 2017 eyes?

I still adore it. I'm re-watching it for the millionth time right now.

It is very dated at times (the character James especially), but I find it adds to the charm. It's 26 years old so some of the hair and fashion is goofy.

I finished my rewatch a few months ago and it's still really effective and gripping television with some amazing characters. But, two warnings:

It gets borderline unwatchable towards the middle of season 2 before it picks up for the last few episodes and there are heavy soap opera elements at times which could be a turnoff for people.

I failed miserably at re-watching the original series in anticipation. (Aka I never started). Nevertheless I am DVR-ing the return, and will have it ready to go as soon as I actually do get through the first two seasons.