Looking through her filmography, I've only seen two movies she was in within the last decade: While We're Young (2014) and Eastern Promises (2007)

The latest episode is going to give me nightmares. I agree with others in that I'm probably going to have to watch it more than once to fully understand it, but all I know is that I loved it and this is better than anything else on TV.

Got a light?
G

So I just watched the last episode. Quite insane. My first thought is that the atomic bomb created the evil of man. This in turn created Bob as a conduit to carry out evil among humans. The giant is a god, who noticed the evil, and created Sarah Palmer as the good to balance the universe. Perhaps to even fight the evil, but I'm not thinking that is the case. I'm more thinking it's that the universe can't exist without the purity of good to define the evilness of man.

I believe the young couple will turn out to be Leland and Sarah's mom (forgot her name). It seems like 34 years later (1990) would put them at the right age to be her parents. The cockroach like creature that went into the young girl is actually the essence of Sarah. If that theory is correct, then I'm trying to figure out if the essence of Sarah was put into her purposely by the Giant, knowing that Leland would be taken over by Bob, or if Bob sensed Sarah's presence and took over Leland.

If the Giant knew Leland would be taken over, perhaps the good of Sarah was meant to counteract the evil of Bob, and create harmony?

If Bob knew of Sarah, perhaps the evilness of Bob created the paradox of Sarah (the girl who was an "angel", but also had the deep dark side)? Perhaps that paradox was due to the mixing of Bob and the essence the Giant sent down?
U

geniusMoment said:
I believe the young couple will turn out to be Leland and Sarah's mom (forgot her name).
Click to expand...

Sarah is the mum's name. Laura the girl.
Obviously it's all very open to interpretation but I felt that was Bob's origin we were seeing. Particularly the way the bug going into the girls mouth was filmed it felt like a bad thing rather than a good thing. Considering the subject matter, Laura Palmer's first act being violating a young girl feels thematically wrong.
Whether Bob sought out Laura because he knew she was a threat or whether Laura was sent out because Leland being possessed was foreseen is a very interesting conundrum..

Feels like the episode did clear stuff up in a fairly oblique way. The thing that killed the couple in NYC seemed to be following Cooper. When he was in that purple room the thing banging at the door was referred to as "Mother". The thing that vomited out Bob this episode was the same as the thing in the box in NYC. It also bears a strong resemblance to the image on the playing card that Evil Cooper was seeking out.. https://heavyeditorial.files.wordpress.com/2017/06/mother-e1498463456678.jpg?quality=65&strip=all&w=780 and http://welcometotwinpeaks.com/wp-content/uploads/wpforo/default_attachments/1495822525-playing-card-part-2.jpg
The book that was released last year had several references to "Mother of abonimations". So Evil Coop searching for the thing that created Bob (for whatever purpose) seems p plausible.


Created the same year as Dougie!

Fun episode; felt closest to the original series in terms of pacing, plot stuff
(loved every bit of the Briggs exposition dump)
, humor, and plenty of Badalamenti score.

Jane Adams' oddball coroner is so good. And that was Matthew Lillard at his most pure Lillard form.

Bobby getting his shit together and becoming a competent cop is a great feel good storyline.

Everything is coming together so fast. It's exciting. I expect next weeks episode is gonna be like Episode 8 again to fuck my mind up.

Love it all, but that actress that plays Tammy is so bad she's good. She's the James of the current series.

This episode seems to be getting hate online for the shorter runtime and the long musical number at the end, but I thought it was really good.


Richard Horne is one of the most despicable Lynch creations. I can't wait for this character to eat shit, but Eamon Farren is giving a great unsettling performance. That scene with Sylvia/Johnny was just brutal. And, fuck Chad again.

Loved Albert/Jane Adams going on a date. I hope they get a few more scenes together.

The Dougie/Janey-E sex scene was the biggest laugh I got so far this season. I've been enjoying the comedy far more than the original series. Almost every joke is landing for me. I'm kind of hoping he continues to wait to bring Cooper back as I'm loving the Kyle/Naomi chemistry.

The Mitchum Bros cracked me up. Jim Belushi wasn't as distracting as I thought he would be and I got a couple of laughs from his reactions.

The musical number didn't really bother me. I liked seeing the return of the Silencio lady from Mulholland Drive although she seemed autotuned at points which was weird. Would love some more Harry Dean Stanton performances too.

I liked this episode, but Richard Horne
is in danger of becoming cartoonishly evil. I'm holding out hope his character is fleshed out more; I think back to that scene with Balthazar Getty where Horne showed a side that wasn't just hateful psychopath.

Guys, wanna catch up in this thread soon but SPILLERZ, up to season 2 ep 2 is it worth continuing? Heard lynch say season 2 sucks

I think there are pleasures to be had in even the lesser episodes (and boy, there are some lesser episodes), but you need to watch every one of them up to the reveal of Laura's killer, and then check out the finale, which remains one of the most batshit insane hours of television in the history of the medium.

Season two has been important to understanding season three.

Staff member
Watch all of season 2. Some of it sucks, but there's stuff you'll probably want to see.

Watch all of it I guess. First 9 episodes and the finale of Season 2 are great and shouldn't be lumped in with the trash. The middle episodes are excruciatingly bad though, but it's worth it for the last episode.

Thx for the info, will definitely get through them then. I enjoy the show, and hope there's at least more scenes like the last one in the opener of season 2.

You're here for the right things then. It seems like a large portion of the show's fanbase wanted the third season to showcase a lot more of the horrible things in order to stay true to the original. The bad parts of the second season are quite grating, but one thing aside, they aren't as awful as a lot of what's on television now.

Incandenza said:
I liked this episode, but Richard Horne
is in danger of becoming cartoonishly evil. I'm holding out hope his character is fleshed out more; I think back to that scene with Balthazar Getty where Horne showed a side that wasn't just hateful psychopath.
Click to expand...

Well the hot theory seems to be that he was conceived when Bad Coop raped a comatose Audrey Horne, in which case him being evil personified more or less makes sense. Though maybe we'll see a different side to the character once Audrey actually gets brought back in.

Comic relief of no, the Dougie/Janey-E scenes were genuinely humane and touching in a way somewhat rare in Lynch's work, and Cole's vision of Laura combined with the Log Lady's "Laura is the one" speech almost brought me to tears. I don't think a TV show has ever affected me the way this one has so far.

Incandenza said:
I liked this episode, but Richard Horne
is in danger of becoming cartoonishly evil. I'm holding out hope his character is fleshed out more; I think back to that scene with Balthazar Getty where Horne showed a side that wasn't just hateful psychopath.
Click to expand...

Well the hot theory seems to be that he was conceived when Bad Coop raped a comatose Audrey Horne, in which case him being evil personified more or less makes sense. Though maybe we'll see a different side to the character once Audrey actually gets brought back in.

Comic relief of no, the Dougie/Janey-E scenes were genuinely humane and touching in a way somewhat rare in Lynch's work, and Cole's vision of Laura combined with the Log Lady's "Laura is the one" speech almost brought me to tears. I don't think a TV show has ever affected me the way this one has so far.
Click to expand...

In the Getty scene I mentioned, Horne showed the very human emotion of fear, which makes me hope his character will expand a bit further on. Maybe when Audrey finally shows up.

Re: Janey-E and Dougie-Cooper, I liked the scene with the doctor and the seduction of Dougie was nicely played by Watts, but the sex scene was so tonally off I was rolling my eyes during it. Related: I assume we're going to get a moment where Janey-E and Sonny Jim realize they no longer have a husband/father. I'm curious to see how that will play out.

While the sex scene was like something out of Being There (perhaps the major inspiration for the Dougie plot??), I still liked it. Despite the comic exaggeration I thought it still effectively emphasized how, uh, underserved Janey-E had been by the real Dougie, which I guess could take some of the sting out of the eventual revelation that he's never coming back.

The sex scene was up there with 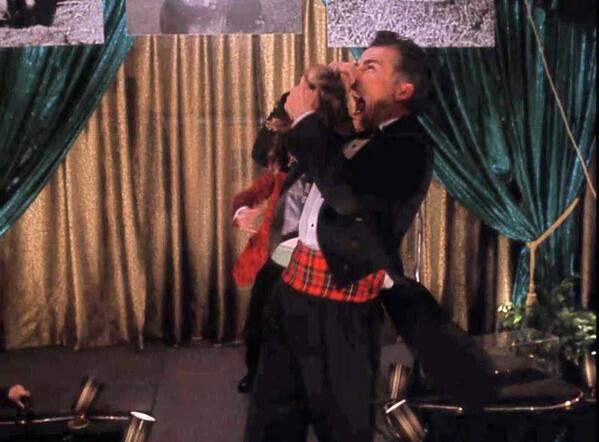 for the most over-the-top bit of groan-inducing comedy in the entirety of the series.

Fitting I guess, because he ran arguably the most Lynch-esque campaign ads of all time

That a dying Coulson appeared is why a small part of me is still hoping for Bowie. (More so now that the previously-theorized-as-Jeffries Tim Roth has shown up as a different character.)

More likely that we'll never see Jeffries, in the same way Harry Truman is always unheard on the other side of a phone conversation.

Just rewatched this episode and this scene knocked me flat. I would have preferred it if it went straight to the credits immediately thereafter instead of the Rebekah Del Rio song which I didn't like at all.

What a spectacular episode


Last ten minutes or so were incredibly tense and we got a Belushi signature fat guy strut. I thought Coop was gonna finally snap out of it when he ate the pie, but I'm thinking he'll finally be Coop when he gets his shoes back. Candy was acting very similar to Dougie, so I wonder if she came from a lodge too.

I read a theory where they said Diane is a doppelganger like Evil Coop. I wonder if that's true.

Lynch's deadpan "He's Dead" after half of Matthew Lillard's head was ripped off killed me. This episode had a couple laughs juxtaposed with disturbing images like that screaming woman right before the vomiting kid.

Shelly still being a fuckup that's into bad guys was disheartening. Seyfried, Dana Ashbrock, and Madchen knocked that scene out of the park. I love new Bobby.