I'm still high off this episode. My immediate reaction was it's the best non-part 8 installment thus far.

I'm still buzzing off it too. It had everything. The last scene with Dougie and the Mitchum Brothers, the Bobby car scene, and the Shelly/Bobby/Becky diner scene were so good.


Candie is where Laura ended up after episode 2 and is her host like Dougie with Coop. 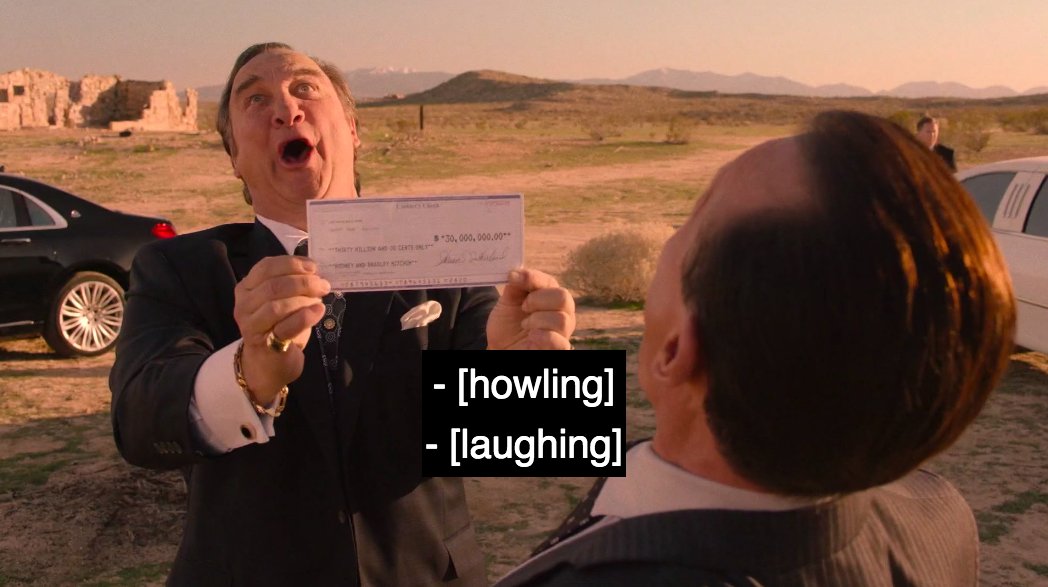 Making Jim Belushi into a likable screen presence is arguably the most amazing thing Lynch has ever pulled off. I hope the next episode has a scene of Battlin Bud doing table pushups and/or shadow boxing for three minutes.

Incandenza said:
The entire sequence involving Bobby was prime Lynch. The episode itself is arguably the best non-part 8 installment of the season thus far. I loved every minute of it.
Click to expand...

Yeah, this episode was wonderfully constructed. And let's talk about Bobby for a sec: it feels like Dana Ashbrook has been basically waiting his whole career for this chance. Really impressive work by him.

Lost my shit at "He's dead!" Lynch himself has just obscene comic timing. Tons of laughs in this one, and probably the best episode so far at striking the classic Twin Peaks tone of emotional violence juxtaposed with incredible warmth. Thank you, Mister Jackpots.

Incandenza said:
The entire sequence involving Bobby was prime Lynch. The episode itself is arguably the best non-part 8 installment of the season thus far. I loved every minute of it.
Click to expand...

Yeah, this episode was wonderfully constructed. And let's talk about Bobby for a sec: it feels like Dana Ashbrook has been basically waiting his whole career for this chance. Really impressive work by him.
Click to expand...

He blew me away in that diner scene. I liked him a lot in the original series, but he did have a few off moments. But, he's really great here.


His face when Shelly ran off to Balthazar Getty was just heartbreaking. As was when he saw Laura's picture earlier on.
I'm really glad he's getting the opportunity to show how good he's gotten over the last 25 years.

What in the fucking world was that
Audrey scene?

No clue. I don't remember Sherilyn's acting being that cringy. I think that was the first one I didn't like.

Sarah Palmer scenes and the Ben Horne/Truman scene were great. The rest felt like filler or started to test my patience (Even the Audrey scene). I will eat my words if all the new characters introduced turn out to be important. But they'll probably never be seen again like rash girl. Maybe I'll appreciate this episode more when I do my big rewatch after the series ends.

I really liked this episode until
the Audrey sequence, which holy hell

Everything involving Sarah Palmer was wonderful. The Frank/Ben scene and the Ben/Beverly scene I loved. Gordon with the French woman was terrific.
The Audrey scene was brutal.


The opening scene was the first time I really liked Chrysta Bell's performance. She's fine enough on the show (I'll cut her some slack since she's a non-actor) but her reactions to getting promoted were well done and poignant for a character I found hard to care about at times.

The Dr. Jacoby scene while amusing was just the same scene from before. I want some Big Ed Hurley.

Seriously, I don't remember Sherilyn Fenn being that bad of an actress on the original series. Good lord.

The Jacoby sequence was just repeating the same shtick from early in the season. The shovel advertisement, Nadine's fawning over the whole thing, etc.

It's somewhat telling that Frank went to Ben about Richard being the one who murdered that kid. Why not Audrey? What's her relation with things right now?

This was the first episode where it felt like Lynch got too caught up in his own game playing. The Audrey scene, the French girl scene, and the closing scene with the three randos were all clearly designed to test the audience's patience for totally superfluous and irrelevant information (does anyone really think that the small-town infidelity melodrama alluded to in the Audrey scene is going to figure at all in the remaining episodes) and to continue the game he's been playing all season of following explosive, tantalizing plot developments with deliberately frustrating delay tactics. The Audrey scene was also another example of Lynch's total refusal to engage in fan service. Everyone was longing for the return of the cool and charming Audrey we all know and love, and instead we got that. These tactics have been working wonderfully so far this season, but they fell a little flat here.

THAT SAID I think there is an interpretation that could, potentially, at least redeem the Audrey scene conceptually, if not in execution. We have to remember that, since we last saw her, Audrey has (presumably) survived a coma, been raped by an evil spirit possessing her high school crush, and (definitely) given birth to the spawn of satan. It's not inconceivable that such a string of events would transform her into the bitter middle-aged woman we saw this week. I don't think it was a mistake that the scene was juxtaposed with the Sarah Palmer storyline, which also foregrounded the extreme emotional and psychological damage resulting from direct contact with horrific evil.

I think it can also be seen as working in parallel with the Dougie plot. Cooper and Audrey were, for obvious reasons, the original series' most beloved characters. Just like we've been waiting for the old Coop to finally regain life, it looks like we're going to have to wait for the Good Audrey to, well, return.

And now that I've typed all that out, I've started coming around on this episode some more, tho it's still not anything I ever need to watch in full again.

Unrelated: The sudden smash cut at the end the Dougie scene made me laugh out loud.
side note: do we even need to keep up these spoiler tags? I'm pretty sure only like four people are reading this thread.

Yeah, I think I'm going to stop with the spoiler tags. Everyone else is watching Game of Thrones. Speaking of that, it seems like Twin Peaks is going to be on an hour earlier starting next week so it is not airing directly against GOT.

BZ posted earlier about getting into the show and he'd probably appreciate not having things spoiled for him, but eh...there really are so few of us here talking about it.

Julia flipped by Smackdown just now while looking for something to watch, and holy shit, they did a Twin Peaks bit. Like a 5 minute bit with Tyler Breeze as Cooper, coffee, donuts, the Diane tape recorder, and Fandango dancing in the red room while some goons held a log. Guess they got a new intern in Stamford.

Also, the first 40 minutes of this episode were a delight, and the last 20 were

Was not expecting that musical performance!

The Audrey scene in this episode actually redeems the scene in the previous installment. Something's wrong with her, man.

Incandenza said:
Was not expecting that musical performance!
Click to expand...

Best Moment of the series.

Incandenza said:
The Audrey scene in this episode actually redeems the scene in the previous installment. Something's wrong with her, man.
Click to expand...

I'm not doing spoiler tags any more so fair warning.

Something is definitely up with Audrey/Charlie. I don't think Charlie is her husband and something happened to Audrey's mental capacity in the coma. Maybe all those names she was blabbering about in the last episode didn't exist. Or maybe Audrey's trapped in an lodge.

That Sarah scene was something else too. Is she in a time loop or something?

I'm still laughing so hard at that James scene. Especially that I think it's the first musical performance that gets a round of applause from the audience.

We get a little more insight into Audrey (though things are still very vague), plus Richard Horne appears in the same scene as Dark Coop (though not in the same room) for the first time. Shit.

I've seen theories floated that Audrey is still in a coma, but I don't buy it. She's psychologically damaged in some way, though.

Got a good laugh out of the Fusco brothers' reaction to receiving the results of Dougie's prints. Of course that's what would happen.
C

Brocklock said:
That Sarah scene was something else too. Is she in a time loop or something?
Click to expand...

Wonderful and bittersweet to finally see Big Ed, and so nonchalantly, too. Appropriate.

I assume you guys also caught the weird sequencing choices relative to the overall timeline. Bobby is in the Double R talking about having found Major Briggs' map that day, but we've seen him on another day since then. Dougie was only now coming back from a night of celebration with the Mitchum Brothers even though we got the funny cutaway of him and Sonny Jim playing catch last episode. Given that it's Lynch, I can't decide if these are meaningful, lackadaisacal, or deliberate editing choices selected solely to tease us. All three seem equally possible.

I too am still laughing at the return of James.

The town of Twin Peaks appears to not be a linear timeline compared to the South Dakota and Las Vegas sections (brief Dougie appearance in part 12 aside). This is deliberately disorienting, especially coupled with things like the one installment that ended with a night scene at the RR where the diners suddenly changed after a hard cut; how in part 13 in the closing scene with Big Ed his glass reflection doesn't sync with the real Ed's actions; all the musical performances at the Roadhouse appear to follow no timeline at all outside our introduction to Richard Horne.
You must log in or register to reply here.
Share:
Facebook Twitter Reddit Pinterest Tumblr WhatsApp Email Share Link
Top