Incandenza said:
all the musical performances at the Roadhouse appear to follow no timeline at all outside our introduction to Richard Horne.
Click to expand...

The Chromatics had the same outfits in episode 12 that they had in episode 2 which adds to the time wonkiness. Or maybe the band is being held captive at the bar. The announcer only appeared in two episodes as well which makes me think it was the same night and that The Nine Inch Nails opened for James Hurley.

Rewatched the episode and that arm wrestling scene is so great. Kyle MacLachlin isn't getting a lot of credit because a lot of fans just want old Coop back but he's giving one of the best performances on tv playing two different characters while still showing traces of old Coop in some line deliveries. 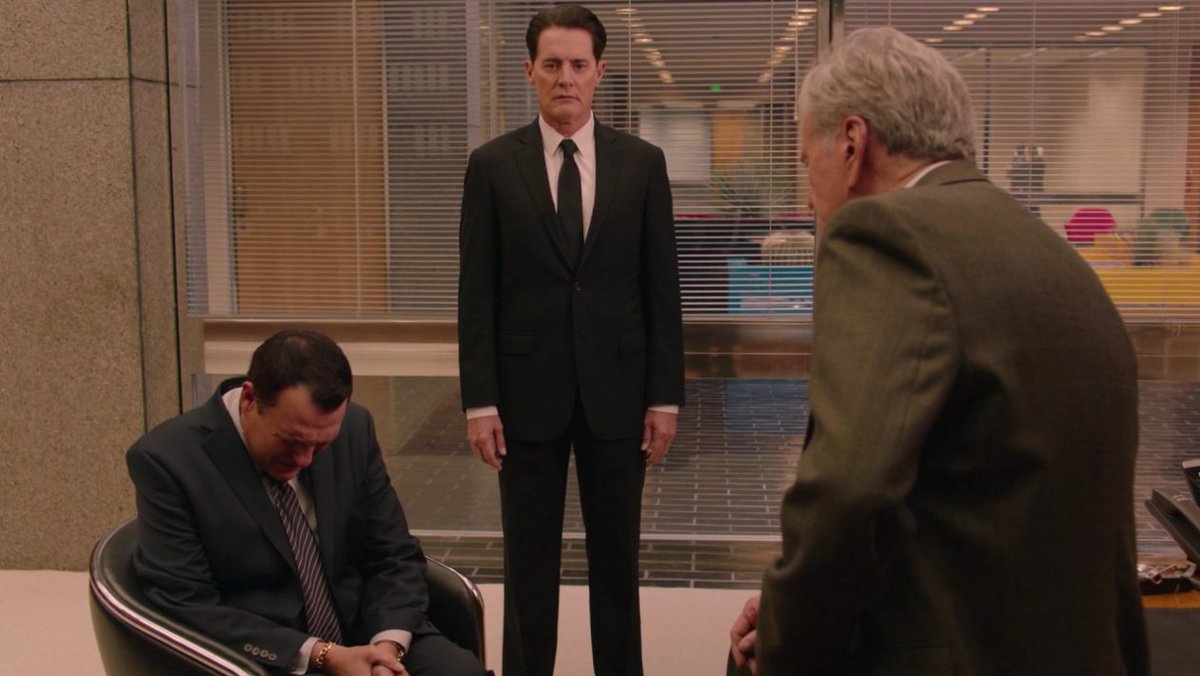 Incandenza said:
The town of Twin Peaks appears to not be a linear timeline compared to the South Dakota and Las Vegas sections (brief Dougie appearance in part 12 aside). This is deliberately disorienting, especially coupled with things like the one installment that ended with a night scene at the RR where the diners suddenly changed after a hard cut; how in part 13 in the closing scene with Big Ed his glass reflection doesn't sync with the real Ed's actions; all the musical performances at the Roadhouse appear to follow no timeline at all outside our introduction to Richard Horne.
Click to expand...

Is Richard Horne's appearance in that warehouse the first time a character from Twin Peaks has "crossed over" into one of the other major narrative threads? I'm drawing a blank on any other instances.

I also think the growing sense of disorientation is also being helped along by increasingly jarring shifts in tone. In this episode alone we had black comedy/horror/suspense (the arm-wrestling scene), flat out slapstick (the Dougie bits; the Fusco brothers), low key small town character study (Big Ed and Norma), melodrama/psychological horror(?) (Audrey), and the bleak as hell Sarah Palmer scene.

Found the Jacoby-Nadine scene oddly touching when rewatching part 13 last night. The two characters don't have a history together and had minimal-to-no interaction in the original series, but the scene fits one of season 3's leitmotifs of getting older/lost time/etc. It's a short and sweet moment and preferable to getting yet another scene of Jacoby ranting while Nadine looks on full of adoration.


Byron The Bulp said:
Is Richard Horne's appearance in that warehouse the first time a character from Twin Peaks has "crossed over" into one of the other major narrative threads? I'm drawing a blank on any other instances.
Click to expand...

It was. I was going to add it was the first cross-over of any kind between the three major threads—Twin Peaks, South Dakota, and Las Vegas—but then I remembered Dark Coop called Duncan Todd in an earlier part. (EDIT: Oh yeah, Dark Coop and Diane have been exchanging texts, as well.)

I'm also picking up on a trend, in line with the series' general prediction toward delay, of leaving episode-ending cliffhangers just, well, hanging. Like, last week we see Diane learn out that the coordinates on Ruth Davenport's arm are for Twin Peaks, but this week we didn't even get a single scene from the FBI/Buckhorn plot. The narrative economy of this show is like the exact opposite of traditional serialized TV.

Edwin said:
Julia flipped by Smackdown just now while looking for something to watch, and holy shit, they did a Twin Peaks bit. Like a 5 minute bit with Tyler Breeze as Cooper, coffee, donuts, the Diane tape recorder, and Fandango dancing in the red room while some goons held a log. Guess they got a new intern in Stamford.
Click to expand...

They did 2 Twin Peaks bits:

Shit got real. I imagine after all this, next week's episode will 85% Dr. Amp and the rest will be a ten minute musical performance.

That's up there with episodes 3, 4, 6, 8, and 11 as my favorite episodes so far. No wasted moment and just packed with memorable scenes. I lost it at the randomness of "I HAD ANOTHER MONICA BELUCCI DREAM" but that scene gave me goosebumps. Andy as the Giant's new messenger is brilliant as well.

So is Sarah Palmer the New York Box creature or is she a host for it or what. That scene was insane.

Don't know what to make of Sarah yet, but it's worth noting the two times we've seen her at home, she was watching scenes of violence. (The animal attack and the looped boxing footage.)

Diane being related to Janey-E was unexpected but also fun.

lol fuckin' Pitchfork has this on the main page: http://pitchfork.com/news/david-bowies-character-returns-to-twin-peaks-watch/

You have to click on it just to get a mention that it was a reused FWWM scene.

Also, I...liked James in this episode!

I did too. Maybe it's just maturity and how he just has a permanent weary sad face now, but James Marshall's acting was much better here than during the original series.

That loglady scene was heartbreaking.

So Audrey's like definitely in some kind of liminal state or alternate plane of existence, right?

Well, if the theory she's been in a coma all this time turns out to be true, she could be on the verge of coming out of it just in time for all the other shit that's about to go down. Brocklock said:
That loglady scene was heartbreaking.
Click to expand...

"But it's just a change"

Got all misty eyed after that scene.

Kyle McLachlan deserves every acting award under the sun

EVERY GODDAMN THING ABOUT THIS EPISODE

I legit got choked up at Cooper being back.

I can't believe there's only two more hours of this.

Incandenza said:
I legit got choked up at Cooper being back.

I can't believe there's only two more hours of this.
Click to expand...

I teared up like three times. The final Coop/Janey-E/Sonny Jim scene got me as did some of Diane's monologue and of course Coop's awakening.

I love The Mitchum Brothers. I never thought anyone could make Jim Belushi a charming screen presence, but Lynch did it.

What an episode of just nonstop breathtaking holy shit moments. I DONT WANT THIS TO END BUT THERE ARE ONLY TWO EPISODES LEFT!

Best hour of TV in the entire history of the medium, easily.
C

Who's Linda? What's going on with Red and the drugs? What's in Sarah Palmer? Can't believe we only have two hours to wrap this up.

Will we find out what happened to Richard Horne? So much happened in this episode I almost forgot he died/got transported somewhere else. DoppelCooper seemed confident he was gone, thiugh. I didn't pick up on this watching it live, but Richard's body disappeared before his head: Briggs ended up headless, too.

You think we'll get closure on Briggs? or the ONE ONE NINE girl?


Byron The Bulp said:
Best hour of TV in the entire history of the medium, easily.
Click to expand...

What were the best Roadhouse songs? I think "Snake Eyes" is the best at taking the mood of the original score but making it dark. "Tarifa" was probably the best song in and of itself. "Shadow" was perfect too. "You and I," well...
You must log in or register to reply here.
Share:
Facebook Twitter Reddit Pinterest Tumblr WhatsApp Email Share Link
Top