WWE in Fall 2021: Best in the World at What We Do (Creating Content)

This is just wild

I’m not saying that there was a discussion in Titan Towers that included the statement “Let’s pitch that vanilla midget an idea so awful he just leaves on his own, and we can be done with him without having to take the heat over releasing him,” but…

Idk. WWE has a long, long history of not knowing how to use undersized heels. Longtime fans (@BruiserBrody ) will note that they originally brought in Roddy Piper to be a manager in late '83/early '84.

King Kamala said:
Idk. WWE has a long, long history of not knowing how to use undersized heels. Longtime fans (@BruiserBrody ) will note that they originally brought in Roddy Piper to be a manager in late '83/early '84.

(Now Brody is going to use his Wisconsin redneck rage to murder me for comparing Adam Cole to Hot Rod)
Click to expand...

That might be slightly overblown as Piper worked a bunch of TV matches as soon as he came in. He was certainly being positioned as the stickman for Schultz and others though. Maybe they were leaning towards a Piper's Palace sort of group with Piper as the weiner for brawnier heels to shine. Plans were changing by the day at that point.

I'm assuming that would've been the same role for Adam Cole. Like if you actually read the articles, it says he was going to be the Lio Rush to Lee's Lashley, which would imply he'd work but probably just to pounce and around take the Ls in tag team matches with his heater.

Piper was suffering from a legit ear injury at that time too, wasn't he?

alkeiper said:
Piper was suffering from a legit ear injury at that time too, wasn't he?
Click to expand...

I think that's Piper's kayfabe. He was working a full loop for JCP and then boom slowed down as soon as he hit the WWF days later.

https://twitter.com/i/web/status/1436312460559069209
I've never even heard of Slice Wrestling and that article looks like it was written by a high schooler. Why would anyone report that!?
H

Looking like it was written by a high schooler never stopped the question of legitimacy with Dave Meltzer.

How dare you impugn on the credibility of SLICE WRESTLING.

Sorry. They haven't really had their act together ever since their founder passed.

RIP to a street fighting and pro wrestling pseudojournalism great

Is Cultaholic the one that's just same as Whatculture?

Mick Foley’s comments about WWE apparently ruffled some feathers with some people in the company. On the latest Mat Men Pro Wrestling Podcast, Andrew Zarian said that there are people in the company who are unhappy about what he said. Foley mentioned how Karrion Kross has been watered down on...

The football game did huge numbers for NBC last night. Highest rating in five years. Raw is likely to get squashed by MNF more than ever

Staff member
i missed the brock segment which is one of the few things i really wanted to see. oh well i geuss i can watch it on youtube.
T

Sami bringing Trae Young to MSG (“I’ve got someone for our corner who knows how to win here!”) was great.

Staff member
i turned it on in time for trae young and laughed really hard. that's a great use of celeb fans.

Just got back from the show. The Trae Young appearance was something the crowd def didn't see coming and they were into booing. The rest of the show, idk, but I was surprised they weren't super into. The first hour was great but it felt like the crowd died down during the end of the Seth/Edge match.

I watched the Brock/Tribal Chief opener. Seeing real sized men fight gave me the tickle inside I don't usually get from the modern product. Brock's selling was on point and the timing of the shirt being ripped off in rage was great.

Following that up with Rip Rogers playing Nakamura to the ring was a little off putting.
My spirit animal Otis was part of this, along with a giant Chief Don Eagle dressed as Col. Debeers.
Zayn wrestles in PJs?
I didn't know the NBA guy, but I enjoyed the proper crowd trolling/heat done by the heels once the connection was made.
Is the general thinking that building Bianca vs Lynch for a month would have been better than having Lynch show up as a surprise and win the title in a flash unannounced? Or does it not really matter either way as the same people will watch regardless? Is the end game just going to be 50/50 booking anyway?
Becky letting the fame and success go to her head at least is a logical twist in her gimmick.
Would MSG be better served for a PPV rather than a show where talking segments dominate? I suppose emanating from MSG does make for good TV.
Big E has an orgasm while threatening Heyman with the Money in the Bank. They missed the boat on E 2(?) years ago when he wasn't the Kofi avenger coming to smash Brock for taking the title.
Seeing the HD 69K Titantron the size of a triple decker house is flashy and all, but a part of me wishes a wall of passionate fans in bleacher seating was there instead.
FFWDing Edge/Rollins as I've seen enough of Rollins and dem dishes in the sink aren't gonna wash themselves.
Edge is in his Bret Hart memorial colors
Broken Neck Edge takes the Sting breaker to the corner from Rollins. Of course he's able to hit a spear right after. Curb stomp cripples Edge. I think I would have skipped the Edge spot in the middle and just went back to back dramatic attacks to the neck with Edge reacting to the corner bomb with desperation as his legs fail underneath him as he tries to stand. The announcers and ref then lose their minds as Rollins does the stomp to the maimed hero.
Rollins cuts an awful little promo afterward. Geeky voice stammering. I'd say a blank stare would have been more effective than that. Or the SD! show runners reading him the riot act.
As the Usos struggle with the Street Profits, Roman comes down to ringside like Jerry Jones used to when the Cowboys were struggling in the late 90s.
Lots of big MOVEZ - kick out stuff. More FFWDing.
Finn Balor and Big E are both afterthoughts to BORK's angle.
Balor's Demon CGI intro was good shit.
T 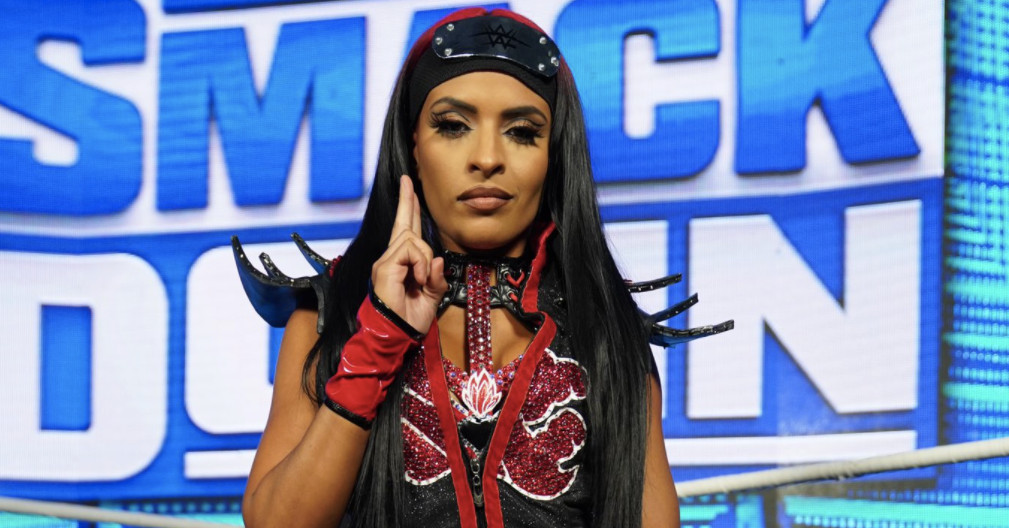 A report indicates Vega was planned for a tag match but it was cut due to time constraints.

Staff member
I also read a story recently that indicates they tricked her into signing by telling her she was gonna do some angles with her husband only to release him a few days after she signed, so now she’ll be touring without him.

He put over his own team and the team they are feuding with in the Paul Heyman school of hyperbole. How scandalous!

HOW DARE A HEEL MANAGER TRY TO TROLL THE IWC BY OVERSTATING THE STREET PROFITS IMPORTANCE!?

Also I like how the #1 heel tactic for guys in 2021 WWE is to try and say that the product is really good.

https://twitter.com/i/web/status/1436868442108448769
Man, imagine having John Cena available at the most famous arena in the world and only using him in a dark match. I know he's not in their long term creative plans right now but you can't come up with anything!?

Cena/Profits vs the Bloodline, with Brock killing everyone, is a perfect main event on the perfect show. This company gets more interesting to me the worse it gets.

The Zelina thing is fucked but perfectly on brand, too. Now makes sense why when Black does his Twitch shit it's still all under her name.

Samoa Joe is injured again and has to vacate the NXT Title.

Did anyone NOT see this happening?