WWE is the embodiment of "if a tree falls in the woods" to me, so I'm only responding because you tagged me.

King Kamala said:
My friend Troy has said Ali was World Championship material since he was in the Cruiserweight Classic and while I always agreed that he was underused, I didn’t think he was quite that good up until this angle. As crappy as it is, I didn’t see that Mustafa could be top guy in a major promotion was until I saw how fully committed he was to this crappy angle. Sort of like AJ Styles in early 2010s TNA .

(Cue @Laz turning into Anger from Inside Out
Click to expand...

I’d be lying if I said it saw it back in the CWC but I thought he was very special and should’ve been a focus of 205 Live very early into that division’s existence.

He is good in the ring, on the mic, he was a gem to fans as a babyface on social media and has taken it to the next level as a heel too. There’s a lot of guys I like misused or underutilized but Ali is another level of ”How can you miss with this guy?”

Staff member
i love tozawa a ton but at this particular moment I would say Ali is more wasted. Ali is also a better promo than Tozawa and I think has the potential in the US to get over bigger. Tozawa is also at this point way more damaged.

The Fight Pit between Ciampa and Thatcher on tonight’s NXT looks to be scrapped as it has been pulled out of all the advertisements. No further information on if it is a timing thing or something else yet.

Also, it sounds like RAW ran long last week so Goldberg gave a promo based upon a scrapped segment where Drew acted disrespectful towards the Legends.

When Ali started using the cool lights costume he had, I knew that guy could be a Main Eventer if given the right material and used right. Same with richochet, but what do I know?

https://twitter.com/i/web/status/1346933933322219522
Also, there was a rumor going around today that an NXT talent was scheduled to get called up to Smackdown to be in the KO-Roman story and was in the script even when the show started. There’s rumor they were pulled, at least in part, due to their involvement in tonight’s card. The only one that I know has been involved with any of the people in the Smackdown in any capacity was Ciampa and I don’t see him getting slotted in versus Roman. I guess Finn too but can’t see that at the moment.

Other rumors that
Rhea Ripley
will be doing a job in this show and joining RAW shortly.

HSJ said:
When Ali started using the cool lights costume he had, I knew that guy could be a Main Eventer if given the right material and used right. Same with richochet, but what do I know?
Click to expand...

I've thought Ricochet was our generation's Rey Mysterio since like 2015/16. At this rate though, like Rey Mysterio, they probably won't book him with any respect until he's swollen gimpy gorilla.

Ricochet and Aleister Black seemed like can’t miss stars to me in NXT. I expected them to need to evolve over time, as everything needs to in hopes of staying fresh. I cannot understand how they screwed those up.

As much as I like those two, Ali is more well-rounded overall and again, squandered.

The problem with the promo cut by Ali is it doesn't mean anything. How many times have we seen these fire promos on these post shows, and they lead to nothing? The only time it lead to anything worthwhile was when Miz cut his on Bryan, and that was a long time ago. Ali is a great talent, can talk, is charismatic, and can work, but that promo won't lead to anything more than a continued feud with Ricochet.

Jon Alba, who is a local sports reporter in Tampa and generally a p. good source on this stuff, just said WWE has no plans to have fans in attendance for the Royal Rumble.

Is WWE (winces) doing the smart and right thing?
H

I’m thinking it’s more Vince doesn’t like the optics of a couple thousand people in a empty cavernous dome.

They probably spent a buttload of money on the ThunderDome and want to get as much usage out of it as possible too tbh.

And I think the fact that they booked Drew Vs Goldberg as main event indicate that they know the fans aren't going to like this garbage and are just continue booking for themselves for the rest of this pandemic. I think only WWE match people really want to see right now is Roman Reigns Vs Daniel Bryan and they're best off saving that for WM when there is a mild to moderate chance things will have improved RE: COVID.

Baby Shoes said:
Also, there was a rumor going around today that an NXT talent was scheduled to get called up to Smackdown to be in the KO-Roman story and was in the script even when the show started. There’s rumor they were pulled, at least in part, due to their involvement in tonight’s card. The only one that I know has been involved with any of the people in the Smackdown in any capacity was Ciampa and I don’t see him getting slotted in versus Roman. I guess Finn too but can’t see that at the moment.
Click to expand...

The news that came out on this today was they were pitching Damian Priest to come in as Kevin Owens’ best friend. Owens said he had no problem with Priest but it made no sense why he would show up and there is zero established connection to go that way. He’d go along with it if they came up with something that made sense but this was just random. Seems like Roman agreed and that was the delay. Sounds like Priest will still come to Smackdown since they feel to be light on babyfaces but it will be seen if they figure a way to shoehorn him into the main event story that the talent also sees as logical.

Charge more than normal and have the small crowd social distance. Be extra scum and have waivers if you want. Make wrestling great again. Then use Thunderdome for TV.

Saw Fit Finlay was a guest on David Penzar’s podcast. I thought it could be interesting so I looked at a recap. Thought I’d share this bit from the recap

Finlay was asked if training the women was something he was assigned to do or something he took an interest in doing? He said, “I was assigned to the girls. I had to work with them doing bra and panties matches and lingerie matches, pillow fights, thanksgiving dinner matches, musical chairs. You know who I am. You know what makes me tick. This really is not in my wheelhouse. It’s not who I am. I did it and tried my best at it. The girls were doing good, I was getting embarrassed telling these girls how to strip each other off doing a sunset flip or whatever it may be. Eventually, I got the girls and sat most of them down and said, ‘I don’t know how you feel about this, but let me tell you how I feel about it.’

I told them I was embarrassed about how to talk to a girl on how to take her clothes off in a wrestling match. It was degrading to them, I thought. We all agreed and hugged and high fived. We made a plan and I said I’m going to teach you how to wrestle. That’s what we did. I got my wrist slapped and told this is not what we want. They said we don’t want girls wrestling like guys. We want them pulling hair, cat fighting and screaming and yelling, wardrobe malfunctions. Stubbornly, I just kept plugging on and teaching them how to wrestle. I would have the girl come to the ring and be in there for 4 or 5 hours a day to try to get this going and eventually it went more to wrestling than gimmick matches. That’s how it went. Then of course, for whatever reason, WWE decided they did want a women’s wrestling division and of course, it’s their idea, right?”
Click to expand... 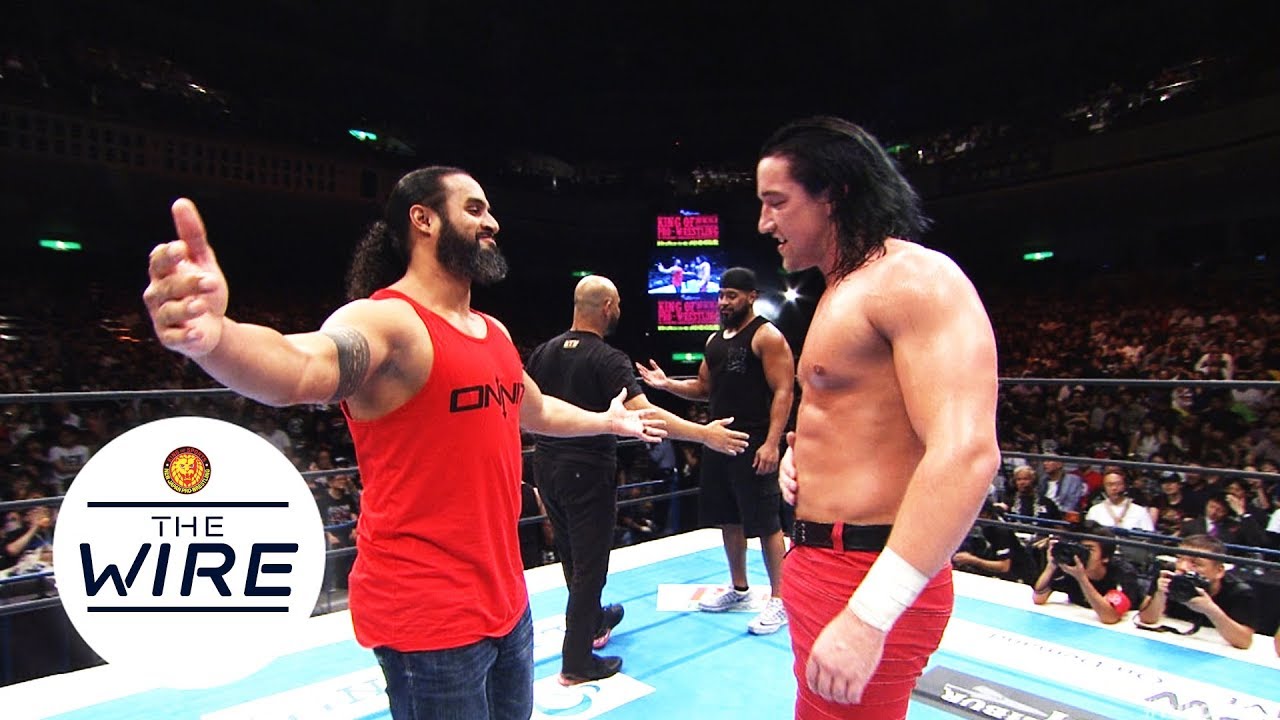 www.wrestlinginc.com
A lot of smarks are understandably poopooing this idea but oddly I could see Jay being brash enough for Vince and Triple H to get behind.
Last edited: Jan 8, 2021
H

If you can’t get excited about the future prospects of Jay White and The Head of the Table...

Hawk 34 said:
If you can’t get excited about the future prospects of Jay White and The Head of the Table...
Click to expand...

STWW being on the Bushwhacker this week indicates to me that they are going to turn him and Bronson Reed into the New Bushwhackers.

Oh, Jay White won’t be in WWE. But expect minimal things from a man who looks just like him known as “Pocket Knife” Duke Carraba.

Now I really would prefer Jay White to stay in New Japan than him going to WWE cause him leaving means El Phantasmo would get elevated to top gaijin heel and he would say something edgelordy and dumb that will get NJPW kicked off HBO Max after their first episode.

Alvarez is still saying that White signed a 7 year deal just a few years ago. These rumors always pop up with the popular NJPW gaijin around this time (last time with Omega and the Bucks).

If he wants to get paid, he'll go to WWE. If he cares about the art of pro wrestling, he'll stay.

what is even weirder is that in 2021, they pushed Nakamura to an apparent face turn.

Between that and the storng play for Jay White, someone must have watched WrestleKingdom this week and said "Hey. That's good shit!"

Hawk 34 said:
what is even weirder is that in 2021, they pushed Nakamura to an apparent face turn.
Click to expand...

Yeah, I didn’t watch the show yet but I saw a write up of the show and while I was disappointed the Street Profits long title reign being ended ZigRoode, I was intrigued with Nakamura. They’ve been saying they are short on babyfaces and the fact he was so dominant in that gauntlet and what happened makes me very curious if he is getting rebuilt as an upper card face.
You must log in or register to reply here.
Share:
Facebook Twitter Reddit Pinterest Tumblr WhatsApp Email Share Link
Top