Yeah it is lazy booking but the matches we got ended up being better than Brock/Jinder, Brock/AJ Part 2 (Would probably be a great match but Brock/Bryan was an upgrade) and Reigns/Orton. It's getting to the point where it's super predictable though.

Big Beard Booty Daddy said:
If you had Nia is an anti-vax on your Bingo card, you win

Remember when Nia posted a picture of herself wearing a pro-Qanon shirt a while back and people were like "maybe she doesn't know what it means!"?

I'm not one of the "Jinder is good" weirdo but I was genuinely curious what a Brock Lesnar-Jinder Mahal match was going to look like. Obviously what we got was way better but I still wonder...

Well, I can paint a picture

just imagine Jinder getting suplexed a bunch and Brock being put in various armbars and chinlocks for 13 minutes.

No way Brock wants to go nearly 15 minutes with Jinder. My imagination of match was that it would be short and inexplably weird. Maybe Brock picking up one of the Singh Brothers and using him like a chair and hitting Jinder with him. 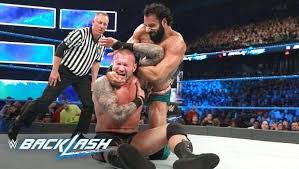 The Singhs would make it fun, but I got to put the kabosh on this because what we got was so much better than a couple of sick bumps from The Singhs. Brock/AJ is like a **** 1/2 match in my eyes.
Last edited: Nov 17, 2020

tekcop said:
Remember when Nia posted a picture of herself wearing a pro-Qanon shirt a while back and people were like "maybe she doesn't know what it means!"?
Click to expand...

I most certainly do not remember this.

Mr. S£im Citrus said:
I most certainly do not remember this.
Click to expand...

Yeah, that was when Drake was getting Nia and Finn and others to donate and do stuff for that sketchy organization.

All wrestlers, in one capacity or another, are fucking stupid. Sound-minded people don't get into that business.

Survivor Series is shaping up to be a decent show. I'm in.

hey guys new here, saw a wrestling thread and thought i have found my people ! I was a huge wrestling fan in the 80s as a kid, stuck with it past the time most kids stopped watching but for some reason i stopped watching around 97/98 ( i think i played in some basketball leagues that only played monday nights plus girls... but dont remember for certain ) cut to the chase i dont think about it again really for 12 yrs or so , never watched an episode , never was curious, and I am on espn.com one night during my shift ( i work overnights so need to stay awake somehow when slow and i am falling asleep ) and i see an article by Bill Simmons that Macho Man had passed. That was my guy, my favorite wrestler, behind John Stockton, doc gooden and maybe one or two other NY sports stars my favorite athlete ever and again i had not for whatever reason even thought of him once in 12 yrs ( except i remember him being in spider man and i thought wow my man is stilled roided up!) but reading that he passed really shook me. I am not an emotional person at all so not like i cried or whatever but it was like my childhood bestfriend , who i had fallen out of touch with died . It just hit me like wtf man im old, like life doesnt stand still it keeps moving and it took someone to die that to me was immortal and in my head still like 1997 nwo savage to pass to wake me up . I got into the rabbit hole of youtubing all of Savages interviews for that shift ,and the next night i did it again, then again, and after a lil while i just started youtubing 80s wrestling not just with savage stuff but all my favorites , found out plenty others had passed and all of it blew my mind. The youtube algorithm must of started spinning and the whole feed was basically wrestling so i clicked on a few of the newer stuff. I asked myself well why did i stop watching, i guess it was getting corny to me , but it was always corny so i dont know. I loved it as a kid, life is short , lets see if i can get back into it and give myself something else to do . I started watching on like friday night shifts online on some bootleg website. I remember after a few months my guys were Ziggler, Cody Rhodes with the mask, Punk ,i thought Barrett was gonna be a big star and couldnt understand why Tyson Kidd wasnt a thing... fast forward 6 months or so I start watching some raw, then Bryan becomes awesome and guys like Cesaro show up and im hooked. the 2012-2014 around when Bryan first stepped away was def the high pts for me besides NXT which i really loved during the Revival, neville , Zayn etc yrs now i mostly DVR the shows and fast forward through most, I watch NXT but never really live and i got into AEW but its still just DVR and havent taken the 50 dollar hit for one of the PPV although i always think about doing it.
Sorry for the long rant and glad to find other fans.

WHERE THE WWE THUNDERDOME IS HEADING.... | PWInsider.com

www.pwinsider.com
ThunderDome is officially moving to Tropicana Field, starting on 12/11.

Fingers crossed that someone gets thrown into the tank full of rays there.
H

Sadly, at least judging from my visit to the famed Trop Dome last summer, it was down to just one lonely Ray.

Hawk 34 said:
Sadly, at least judging from my visit to the famed Trop Dome last summer, it was down to just one lonely Ray.
Click to expand...

I know you mean he sea creature but part of me wants to believe Quinton McCracken was there by himself reminiscing about his 1998 season.

Randy Winn wondering where everyone went.

(Tampa Bay Devil Rays trading him to Seattle for a manager is still a very underrated unintentional comedy to me).

Watching last night’s Smackdown right now. I feel the Smackdown women’s team is head and shoulders above the RAW team but feel like they are going to have Smackdown take apart Lacey, Peyton and Lana (if she even makes it to the match) before having Nia and Shayna dominate.

I really dug the Reigns-McIntyre contract signing. I figured they could chalk a Drew loss up to having to have that match with Randy this week. As good as I thought the segment was, it was setup to me that Drew will look a little bit like a chump if he does not win.

Based on the angle run on NXT, it looks like the Women’s War Gamed match should be Candice LeRae, Dakota Kai. Raquel Gonzalez and Toni Storm versus Shotzi Blackheart, Ember Moon, Rhea Ripley and Io ShiraI. Could be really good.

I’m enjoying the Leon Ruff angle because I have no idea where they are going with it. They went from the fluke win to him standing up for himself and then this week it seemed like they were planting the seeds for him to maybe end up heel with some delusional and self-conscious stuff. I’d assume the Triple Threat is set up to keep everyone involved strong and Ruff to steal another win but will be interesting where they go.

Also, very happy to see Grizzled Young Veterans back. It looked like they were coming to NXT before the pandemic. Not sure where they fit in the current tag team scene but will be good to have them in the mix.

I am very excited for a Bayley-Bianca program

Between this and putting Peyton over at Survivor Series, feel like Bayley is following up her title run by getting some newer acts some heat.

Thatcher/Kushida on NXT was really good, and relevant to my interests. Have we ever seen Thatcher vs. Gulak?

Baby Shoes said:
I am very excited for a Bayley-Bianca program

Between this and putting Peyton over at Survivor Series, feel like Bayley is following up her title run by getting some newer acts some heat.
Click to expand...

This is what stars are supposed to do, after an extended run on top, right?

Mr. S£im Citrus said:
This is what stars are supposed to do, after an extended run on top, right?
Click to expand...

It is but how often has WWE actually done that?

So I saw that Jeff Hardy vs Ricochet took place on a recent episode of Main Event. I know Ricochet has been jerking the curtain for almost a year now but I feel that match should be a bigger deal. At least this guarantees it shows up on some Hidden Gems compilation somewhere down the line.

Hey they were certainly aware of it!

So did they not sign Trey or are they waiting?

Trey is the one who has mental health issues, right? I can understand why WWE wants to do further vetting.

Of the 4 I know, I'm most surprised by the signing of Rust Taylor. He had no buzz around him, outside of working the NJPW US shows. I'm happy that they're going to make bank, but I hope they know what they're about to get into.