The brainchild of one Rod Serling, the Twilight Zone is a near mandatory staple of any burgeoning horror fan and even non-fans of horror have found various tales engrossing. SyFy near annually runs episodes on New Year’s Eve into New Year’s Day and the stories have largely held up in comparison to contemporaries such as The Outer Limits or later anthology shows such as Amazing Stories.

Trying to whittle down such a fantastic series to just my Top 10 episodes was immensely difficult and I could probably name a Top 5 from just each of the 5 Seasons alone. I also must highly, highly recommend the Blu-Ray Box Set as the quality of picture & sound is vastly improved along with the gorge of bonus supplemental material.

Before we get to the Top 10, let’s take a look at the honorable mentions that just missed the cut, some of which will no doubt surprise people. Spoilers below!

Honorable Mention #1: Episode 73 – It’s a Good Life.
This episode is most remembered for Bill Mumy’s performance as Anthony Fremont and his mental ability to send people and creatures where he wants when he finds that he doesn’t like them. As a result, his family is utterly terrified of crossing him leading up to a famous scene where he transforms Dan Hollis, a neighbor now very drunk, into a Jack-in-the-Box. The scene and episode was parodied as part of The Simpsons’ Treehouse of Horror and modernized a bit for the Twilight Zone movie as well.

Honorable Mention #2: Episode 52 – A Penny For Your Thoughts
Upon flipping a coin that lands on its head, Hector Poole, played very well by Dick York, soon obtains the power to hear thoughts of those he works with at his bank. He ends up getting a promotion via blackmail and gives Mr. Smithers, played by Cyril Delevanti, a long overdue vacation after Smithers confides in Hector that he wanted to rob the bank but never had the guts to pull it off. Hector also ends up in a relationship with Miss Turner afterwards, thanks to his ability to hear her and with whom he reveals his powers.

It’s a solid and well remembered episode but Dick York’s performance largely carries the material despite a rather subpar story.

Honorable Mention #3: Episode 43 – Nick of Time
The classic story of a couple whom enter a cafe after their car breaks down and the husband, played really strongly by William Shatner, ends up slowly being consumed by the fortune telling machine on the table that answers yes/no to questions aimed at it. By the end of the episode, Don and his wife, Pat, manage to finally pull themselves free of the machine and eventually leave town. A beleaguered couple then enters, showing what could have happened to Don & Pat as this couple is clearly consumed.

Another episode that is very solid and largely carried by a singular acting performance. 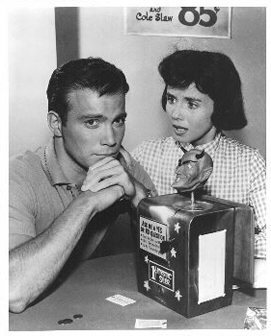 Number 10: Episode 22 – The Monsters Are Due on Maple Street
Many people would probably have this closer to Number 1 than here but the episode is pretty bland outside of the memorable plot of neighbors accusing others of being aliens after the power goes out in their neighborhood except for one house. The twist at the end is one of the more resonating to fans and it offered a glimpse into what the Twilight Zone could offer. Another episode with a similar twist was To Serve Man, also parodied in The Simpsons’ Treehouse of Horror.

Number 09: Episode 98 – The Dummy
This and Living Doll basically served as archetypes for every single creepy science fiction/horror story to come that involved inanimate dolls coming to life. Cliff Robertson hits a home run here with his performance and really sells the fear and near hysteria of the ventriloquist, Jerry, needing to escape from Willie. He even adopts a new dummy named Goofy Goggles only to find that he made Willie come to life himself and resigns himself to the twisted fate at the end of the story.

Number 08: Episode 08 – Time Enough At Last
A near instant classic about a man who finds himself locked in a bank vault only to emerge in a world destroyed by a nuclear bomb. His desire to be a recluse from his wife and life in general, merely content to read, ends up becoming his signed fate worse than death. The shot of him screwing up his ability to read is both comedic but also heartrendingly sad as he’s the sole person left around him. Burgess Meredith puts in a great performance as timid, introverted Henry Bemis and really highlights both the luck and eventual mockery of his situation.

Number 07: Episode 39 – Nervous Man In a Four Dollar Room
Joe Mantell delivers one of the most memorable, compelling performances in the show’s history as Jackie Rhoades, trapped in a room waiting for his boss George. However, as he waits, he ends up battling himself in a inner turmoil battle of war between two personalities that want to claim control to his body. William D. Gordon whom plays George is rather hammy but Mantell’s performance is so striking that it’s easy to overlook. The episode also really plays well considering it was shot and acted in a single room, lending some heavy similarity to Sidney Lumet’s 12 Angry Men film in how to deliver a single room epic. Number 06: Episode 123 – Nightmare At 20,000 Feet
William Shatner again appears as Bob Wilson, taking a plane flight with his wife only to find himself attached to a window seat that reveals a gremlin on the wing of the plane. The makeup really doesn’t hold up (as it largely looks like a man) but Shatner’s performance is very subdued and understated while gradually building up to the point that his mental instability is entirely believable. Yet another episode parodied in The Simpsons’ Treehouse of Horror, it was also redone for the Twilight Zone Movie with John Lithgow. While the movie’s effects were much better, I prefer the more nuanced acting performance from Shatner here.

Number 05: Episode 34 – The After Hours
A really smart little episode that plays with what is real and what is not. Marsha White finds a gold thimble and finds herself on the 9th floor, being attended to be a saleswoman with a rectified gold thimble. Much to Marsha’s growing confusion, nobody seems to believe her that anything happened on the 9th Floor because there is no such floor. Like other episodes, Marsha gradually grows more hysterical only to find out the truth of the entire situation, somewhat obvious in hindsight. The episode still holds up well thanks to the performances of Anne Francis as Marsha and Elizabeth Allen as the mysterious saleswoman.

Number 04: Episode 70 – A Game of Pool
I love Jack Klugman. I also like billiards a lot and you throw those two in a blender, out pours this fantastic episode. Jesse Cardiff, played by Klugman, proceeds to proclaim that he is the absolute best pool player to ever live and challenges the deceased Fats Brown, played equally well by Jonathan Winters. Fats accepts the challenge and tries to get Jesse to admit pool shouldn’t be placed first but Jesse refuses to take the bait and manages to defeat Fats, only to learn that the price is far more than he really bargained for.

Number 03: Episode 02 – One For the Angels
A favorite of mine from the moment I first saw it. Ed Wynn plays Lou Bookman, a salesman trying to pitch anything and everything on the sidewalk and is full of various gadgets, gizmos, and inventions. Mr. Death appears and Lou manages to bargain him into letting Lou make one last amazing, great sales pitch. Lou ends up living up to that offer in order to save the life of Maggie, a little girl that has befriended Lou. The scene of the pitch and the editing of the scene is really good and the performances, especially by Ed Wynn, are impressively memorable.

Number 02: Episode 79 – Five Characters In Search of an Exit
Another astonishing episode that largely ties itself to the single room shot of the previously mentioned Nervous Man In a Four Dollar Room with an Army Major waking up to find himself trapped in a large cylinder with 4 other characters: Ballerina (Susan Harrison), Clown (memorably Murray Matheson), Tramp (Kelton Garwood), and Bagpiper (Clark Allen). Matheson manages to standout amidst a group of good performances and William Windom, as Major, manages to convey the growing frustration against the accepted futility of the other group members. The twist at the end is one of the more memorable in the series and still holds up well.

Number 01: Episode 42 – The Eye of the Beholder
My number one episode and the one I must watch whenever SyFy runs their marathons. Janet Tyler, now undergoing her 11th surgery, merely desires to look like everybody else but soon learns the horrific consequences when her bandages finally get removed after hours of waiting by her doctors. Maxine Stuart offers her voice to Janet and showcases the increasing concern on top of the wishful desire, nearing desperation, that the surgery must succeed. Donna Douglas and Edson Stroll, when revealed, offer a great contrast to the memorable facial masks of the “beautiful” creatures as contrast. The mask would be used again in Nightmare at 20,000 Feet.

So there we have it, my Top 10 Episodes. Any episodes not listed that would make your own Top 10? Feel free to comment below!

Credit to horrornovelreviews.com for feature image