The NFL offseason always kicks off with rules committee meetings and as such, rule changes are made or rules are at least analyzed. During the near 100 year history of the NFL, rules have come and gone and had various impacts on the NFL for good and bad. So here is a look at the Top 5 rule changes that impacted the NFL.

5: NFL Legalizes the Forward Pass anywhere behind the line of scrimmage in 1933
This rule was adapted from college football and immediately legitimized the down field passing game. Passing was considered almost a novelty or even a gimmick when a team struggled to run the football down hill. Quarterbacks such as Benny Friedman and Arnie Herber were the immediate beneficiaries of the rule change (along with Herber’s talented wideout Don Hutson). Credit to http://www.bigblueinteractive.com
4: Kickoff line was changed from the kicking team’s 40 yard line to the 35 yard line in 1974.
A minor change but it helped open up the offensive style of the NFL as return men average 23 yards per return in 1972 and 1973. The rule change saw an increase in team return yards almost immediately and allowed kick returners to make a bigger impact in the battle for field position.

Return men such as Billy “White Shoes” Johnson, Terry Metcalf, and Rick Upchurch immediately became potent threats in the return game and forced teams to have to account for having a good special teams unit in addition to their offense and defense.

Credit to http://www.broncoplanet.com
3: Defenders not allowed to maintain contact with a receiver past 5 yards in 1978.
The infamous Mel Blount Rule named after the physical Pittsburgh Steelers defensive back is one that has carried over to the present day in terms of being a massive landscape changer in the NFL.

The year of the rule change, NFL teams averaged 159 yards per game and averaged 26 pass attempts per game. Despite throwing just 1 more pass per game, teams were far more efficient (6.12 YPA compared to 1977’s 5.68). 1979 saw the rise continue up to 180 yards per game and then 196 yards per game in 1980. In the span of just 3 seasons, teams started throwing the ball and averaged almost 54 yards more per game. As a result, this would further place emphasis on quality tier quarterbacks and wide receivers as well as slowly revolutionizing the receiving tight end away from an in-line blocker role.

Credit to http://www.spokeo.com
2: Sacks become an officially recognized statistic in 1982
Unofficial until 1982, sacks immediately became a boon for defensive players especially players lined up at defensive end or rushing the quarterback off the edge as a linebacker. They immediately had solid, statistical evidence that could transition them to huge pay days. Soon, elite pass rushing defensive ends not only made more money but also boosted the necessity for an elite blindside tackle to protect the quarterback. It was no longer enough to say that a defensive end could rush the passer but now fans and teams could point to a player accumulating 7 Sacks compared to another whom only accumulated 2.

In addition to putting a number on defensive players, it immediately gave them notoriety in games and in the public spotlight. The mid 1980’s Chicago Bears under Buddy Ryan made as much of an impact due to their sacks generated as the pummeling they put on opposing teams. Even as early 1983, players started seeing the dollar signs and started focusing more on generating sacks. In 1983, 14 defensive players had at least 13 Sacks. In 1984 that number stayed nearly the same but Mark Gastineau of the New York Jets had 22 Sacks, a nearly unheard of number. A large part of the aura around Lawrence Taylor was his ability to rush the quarterback and put up high sack numbers that were officially recognized. Credit to http://www.siphotos.tumblr.com
1: Illegal Contact becomes reworded and enforced in 2004
Partly coined the Bill Polian Rule after his Indianapolis Colts got beaten up by the New England Patriots in the AFC Championship Game, this tweaked rule and subsequent enforcement has seen a meteoric rise in gaudy passing statistics. Combine that with more college football philosophies creeping into the NFL offensively, and a match was immediately made in heaven for not only quarterbacks but nearly every single skill position. Running backs who could catch the ball became a priority for teams on 3rd downs and led to increased roles for guys like Kevin Faulk and Darren Sproles.

The impact was almost immediate in 2004. Peyton Manning threw 49 TD but that year, 8 other quarterbacks threw for over 3,800 yards. By 2008, top tier quarterbacks such as Drew Brees were flirting with 4,500 yards a season and in 2009 there were an astonishing 10 quarterbacks over 4,000 yards.

The impact of the rule has been such that in 2011 there were 3 quarterbacks over 5,000 yards and last year saw 14 quarterbacks (almost half of the NFL) throw for over 3,800 yards. 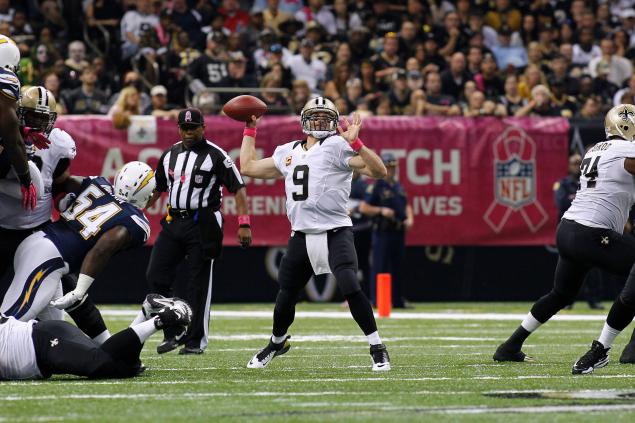