The hardest thing for young wrestlers to grasp is that things in the ring are not real. When you hurt your opponent, you’re going against the very concept of the sport. Bret hates chops because they hurt and it’s a cheap spot for a pop.

Hart worked construction as a teenager and he figured out quickly that wrestling was more fun to do and paid better.

Second generation wrestlers usually figure out the sport quicker than others. Stu Hart taught Bret to keep things as realistic as possible as he told his stories in the ring.

If someone took cheap shots on you in the match, Hart was taught to fire back and/or use a legit takedown and lock the guy in a submission lock.

In Japan the workers would work with you until they lured you into a vulnerable spot, then they’d try and stiff you.

Real sports have a natural psychology to it as teams or fighters use a game plan and their opponents respond to it. Wrestling should emulate this kind of basic story.

A babyface needs to keep fighting back when the heel is putting the heat on you. If you sell too much for too long, there is a chance the fans will stop buying you as a real threat.

Hart spent his early WWF days fighting undercard heels who had no interest in seliing much or giving him many spots to shine. Hart remembered this and eventually did the exact opposite when he turned heel and became the guy working with babyfaces.

Dynamite Kid was a great heel for giving the faces all kinds of shine. Bad News Brown was among the worst guys for making babyfaces look good.

Brown had been a judo champion, so he was leery of taking hip tosses and other such moves because it would make him look weak.

Bret credits himself with innovating frontal turnbuckle bumps, being tossed full on into the stairs at ringside, inventing a reversal for the Sharpshooter and creating the figure-four around the ringpost spot.

When Hart became a referee at age 19 he had still not been told that wrestling was a work. He was told to call it as a shoot.

Going for pins early in a match could be considered poor psychology since guys should be fresh at that point.

The WWF was booking Hart somewhere around 300 times a year. This led to Hart choosing to take matches off and not do much more than rest holds. If the crowd was hot, Hart would try a lot harder.

Wrestlers should play to their strengths. If you have shitty punches, don’t punch…and so on.

The Montreal Screwjob was a real turning point in fans becoming interested in gaining backstage information. Before it was about grappling in the ring. Things are different now.

Ric Flair did not have psychology. He worked hard, but he had spots that he liked and he did them over and over.

Hulk Hogan had good psychology. He took a major beating, then used his power to roar back and find a path to victory. Had he not been a beast of a man, then his psychology would have been poor.

The undercard guys have to know what high spots the main eventers plan on doing in order to not take steam away from their feature bout.

Arn Anderson and Tully Blanchard had great psychology. They were masters at working false tags and doing switches behind the refs back to get heat. They took a lot of the best stuff from the tag matches of the 70’s and used it in their own battles.

If your working a series of matches in the same town, you need to remember to switch up the matches and not repeat spots in order to keep things fresh and realistic.

Hart defends his own habit of executing a set series of moves in many matches (backbreaker, second rope elbow, etc) because it makes sense for you to have developed a number of moves that are your aces.

Heels call the action in the ring. The fans chanting or catcalling you should not alter your planned match. The modern day fans will cheer heels and do things to intentionally go against the grain, so you really need to ignore them and stay the course.

In the same sense, if the crowd does pop for something, you should make a mental note and use the spot again in another town.

Dynamite Kid used a bunch of complicated spots that would keep you on your toes as you tried to remember how he wanted things laid out. Others like Terry Funk called it in the ring and had nothing planned beforehand.

Babyfaces need to have fire and appreciate the fans who show you love.

Hart was a fan as a kid, so he knows how much of a thrill it is for a kid to meet his hero, so guys need to do what they can to embrace their support.

Mick Foley had multiple gimmicks and all of them worked differently, having great matches along the way.

Heels can fight each other and keep proper psychology. Two monsters fighting can be like Godzilla vs. King Kong in the squared circle for example.

Shawn Michaels worked like a face against Diesel at Wrestlemania 12 and ended up cutting off Nash’s babyface aura.

Owen Hart made it a point to work a nasty style to keep himself as a heel in his brother vs. brother feud with Bret in 1994. Nuts shots, etc.

Bret and Owen worked some tag matches before Mania 10. Owen was doing highspots that were getting fans to pop for him. It was then that Bret scrapped their whole planned match and restructured things to keep Owen as the heel.

Some promos were semi-scripted in the 80’s to give the guys key lines to deliver.

Hart’s promos in his early babyface days were poor in part because he was not winning very often, and thus he didn’t really want to make promises to the fans, only to go out and lose.

Scripted promos are killing the business.

Terry Taylor used to give Hart pointers for his matches in WCW. This soured Hart because he was a much better worker than Taylor and didn’t think he needed advice from someone like that. Eric Bischoff tried to tell Hart how to work too despite never being a wrestler. Vince McMahon is the only non-wrestler who seemed to grasp how to put a match together.

The later 90’s were tough because the fans were often more into getting their signs on TV than vested in the matches in the ring.

The fans bought into Shawn and Bret’s feud because they used real life elements to toss barbs at each other. Michaels okayed everything Hart said, but then would get offended after the fact. The real heat that followed ruined what could have been a truly big money feud from reaching it’s potential.

HBK had recently used Bret’s music as a tease on RAW when this interview was filmed. Hart would rather not be included in such events because Montreal and the aftermath is still a sore spot.

Had Montreal not happened, then Goldberg would never have kicked him in the head and ended his career, which led to concussion issues and Bret having a stroke. Being in the WWF would also have allowed Hart to talk Owen out of doing the Blue Blazer stunt that ended with his death,

Hart liked to take lesser pushed heels and help them have great matches to get them over. Henry Godwin and Pierre Outlet were solid guys who Hart could help shine.

While in Stampede. Hart was often charged with giving the locker room their finishes, which helped him grasp how to put together a card as well as a match.

The WWF didn’t really understand or appreciate that Hart came in with 6 years of wrestling experience and backstage agenting. Pat Patterson and Hart would discuss match layouts and Patterson would give Hart the chance to play out his vision in the matches. This in turn gave Hart cred in the office as a good worker.

Hart was leery of doing so many jobs as a babyface in the WWF because he feared he’d be killed off in the fans eyes.

Ric Flair and Hart had great matches until Flair lost the WWF title to Hart. After that Flair started calling much worse matches and after a few weeks of stinkers Bret went to McMahon to tell him Flair was sandbagging him. 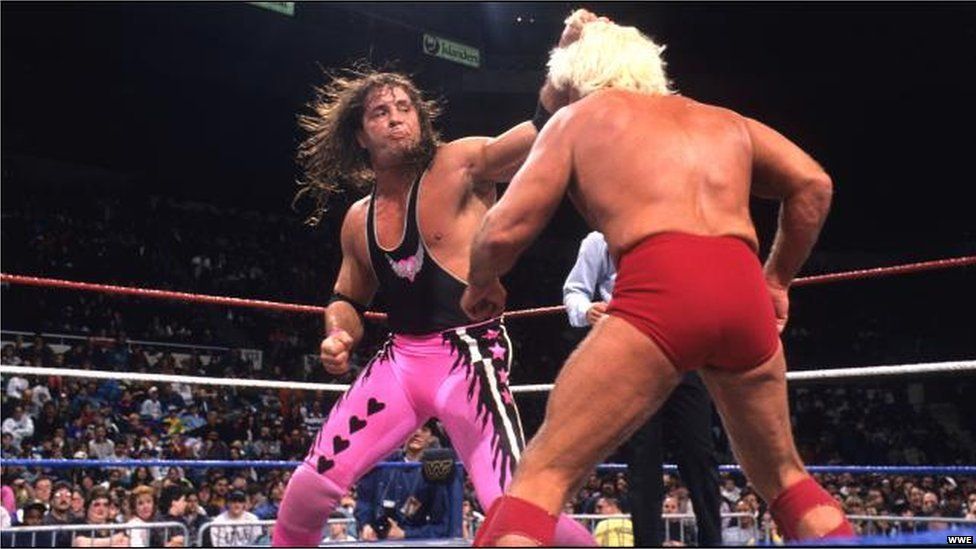 Blood should be used sporadically and with purpose.

When facing a limited guy, Hart would ask the dude for his four best spots.  Hart took them and built a match around the spots.

Hart liked to find physical specimens and try and help them develop as wrestlers. His dad liked legit athletes who were burly, and Bret followed suit.

The modern product needs more fat monsters. Everyone is in shape and look a lot alike.

Guys who grew up fans tended to become good wrestlers. Others who came into wrestling later in life never had the appreciation for the history of the sport.

Chief Jay Strongbow was a straight shooter as an agent which earned him heat with the guys since he’d tell them their match was the shits.

The WWF did quick jobber matches. Hart was not a fan of this concept due to Stampede being a territory with longer matches. How can you work a 3 minute match and make it mean anything?

Hart emulated the Dynamite Kid when Bret turned heel in the WWF. Being a smaller guy in a big man’s territory made Hart work that much harder.

David Schultz, Dynamite Kid and Archie Goldie were the best heels in Stampede.

Kurt Angle against Brock Lesnar at Wrestlemania 19 and Angle against Rey Mysterio Jr. at Summerslam are the two best matches of the (then) recent WWE era.

The WWE treated Hart greatly during his recent return to Titan Towers to organize a DVD covering Hart’s best matches. The wounds aren’t healed, but at least the WWE did not release the planned documentary burying Hart.

Shawn Michaels was never honest with Bret after a certain point in 1997. Just the fact that Shawn went along with the screwjob went against everything the boys were suppose to stand for in the business.

Final thoughts: Overall a rather bland effort, covering much of the same info as many of Hart’s interviews over the past 15 years. Good solid knowledge for rookies of the business though.