This was pushed in the Apter publications and WWF magazine at the time, but it has taken me 30 years to finally see the match. I am kind of geeked up for it.

Hennig is thrown across the ring as a result of colliding with the Bulldog. Perfect spends several minutes avoiding another confrontation. When Smith grabs his hand for a test of strength Hennig screams “Owe! You son of a bitch!” very loudly.  The men go through some cradles and reversals on the mat, but they end up bundled up at the ropes. A few awkward seconds pass and the impasse is corrected with a low blow from Perfect.

Bulldog powers out of some of Perfect’s offense, leading to the Coach (L.A. legend John Tolos)  delivering some poor looking stomps down on the challenger’s back. Bret Hart sprints from the locker room to put an end to that. 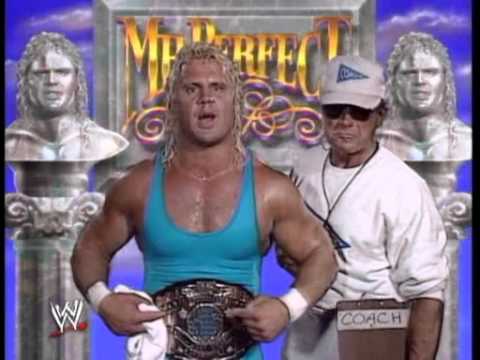 A sleeper wears down the Bulldog, but he escapes and crotches Hennig on the ropes. The ref is bumped. Perfect attempts the Perfect plex, but Bulldog rolls him up instead. The Coach runs in, but is cut off by Hart. Coach’s selling is worse than his strikes were earlier. Was John Tolas that bad in his prime? I believe his match in 1983 on the AWA’s “Super Sunday” was embarrassing as well. I guess he is older than dirt here, so I should give him a pass.

Anyway…the Hitman counts the pin for Smith, like that is going to hold up under Jack Tunney’s rule of law. The Bulldog releases the cradle. Hart and Hennig brawl. The ref wakes up and DQ’s Bulldog for the Hitman running interference. Bulldog was roided up but capable of being carried at this point, so this was a solid affair, even with all the gaga.  In a different time, the finish would have led to a 3-way match at Summerslam.

Kerry Von Erich vs. The Warlord

Jim Neidhart, Gorilla Monsoon and Bobby Heenan call the action.  Monsoon says the Texas Tornado is smarter than the Warlord, which is terrifying to comprehend.

Warlord poses and wants a test of strength. Von Erich wanders away and points to his head. There’s a 50 percent chance that wasn’t due to the spot, but instead Kerry remembered where he set down his pills.  Warlord uses bear hugs and other rest holds to drag things down as quick as possible. The announcers argue over the benefits of going out for track and field in school instead of calling the “action” in front of them.  Heenan wins the argument by telling the others he was dating cheerleaders, not worrying about hanging out with other sweaty men.

The match goes to the floor, where Von Erich is driven into the steel post. Von Erich tries to flip over Warlord to get back in the ring, and almost doesn’t make it. Warlord uses clubberin’ to keep the Tornado down.

Von Erich tries a series of clotheslines to rock the Warlord, finally downing him with the discus punch. The men spill out over the top rope and they trade blows until they are both counted out.  Bleh. Bleh. Bleh.

Hercules is with Roma, but Hawk is AWOL. I assume this was meant to be a tag match, but can’t find any info to verify that online. Herc interferes liberally to help Roma control the first several minutes.

Animal fires up after a piledriver and starts to batter Roma with clotheslines. The ref is bumped. Animal downs Roma with a flying shoulder block. Hercules runs in to save his partner. Herc holds Animal as Roma tries a dropkick, Animal moves and Herc falls right into the ref’s lap. This does not warrant a DQ. Animal hits the stunned Roma with a powerslam to mercy kill this at the 5 minute mark. Really absolutely nothing redeeming to this one.

The Rockers and the Big Bossman vs. The Mountie and the Nasty Boys

They tease who will start for a bit as the Mountie avoids the Bossman. Saggs is battered by the lawman instead. Bossman is briefly hurt, which brings the Mountie in. He walks right into a Bossman slam. The Nasty Boys charge in and the Rockers send them into retreat.

The Bossman falls into the role of face in peril and spends several minutes being battered by all three heels. Finally, the Mountie pauses to remind us that he is indeed the Mountie, and the Bossman uses the moment to deliver an uppercut.  Great spot. This gives the Bossman the opening to tag out.

Shawn Michaels goes wild for a bit, leading to things breaking down to a six-way brawl. Jimmy Hart attempts to toss in his helmet to Knobbs, but Shawn intercepts it and cracks the Nasty Boy. The ref is busy and misses that attack. Shawn tries a cover, but the Mountie sneaks in and zaps him with the cattle prod. Jannetty wiggles Michaels to the side and covers Knobbs instead, earning the pin.

This was harmless fun. I am a sucker for multi-man tag matches.

The Dragon vs. Smash

The Dragon works Smash’s arm for the first several minutes in order to neutralize Smash’s size advantage.   Smash sells his arm during his counter attack, earning bonus points from me for psychology. The future Repo Man tosses Steamboat to the floor and slams him to the mat.

Smash hits a back breaker that looked phony enough that Monsoon called him out on the sloppy execution. Krusher Darsow locks in a half ass sleeper, which again prompts Monsoon to complain about the execution. Steamboat’s arm drops 3 times, and the ref doesn’t call the match. Monsoon is aghast.

The Blacktop Bully misses a charge, which opens up the chance for Steamboat to scale the ropes and launch his patented crossbody for the win.  An unmotivated Smash dragged things down here, leading to an unmotivated reviewer looking up other things instead of being enraptured by this match.

Jake “the Snake” Roberts vs. The Barbarian

Roberts attempts to work the Barbarian’s arm several times to start, with the big man just staring at him and not selling. Barbarian batters Roberts to the mat and grinds away at him with forearms.

The Barbarian laughs as the Snake tries to rise back to his feet. Roberts catches him with a desperation clothesline, but Barbarian gets up and boots our hero. Barbarian poses instead of going in for the kill, allowing Roberts to hit the DDT.  That prompts Earthquake to make his way to the ringside.

Roberts grabs his snake before the monster can attack him. He chases Quake down the aisle as Bobby Heenan crawls in the ring and checks on the Barbarian. The ref stands there with great futility until he finally counts Roberts out.   God forbid the Barbarian takes a loss here I guess. This was more an angle for the Roberts/Quake feud than a match.

Greg “the Hammer” Valentine vs. Haku

Somebody throws trash in Haku’s face as he walks to the ring. Haku shoots the guy a death stare, but elects to not commit manslaughter at this point in his evening.

Commentators Vince McMahon and Roddy Piper give us a PURE SPORTS BUILD breakdown of each man’s strengths. Haku hacks away on Valentine and works the rest holds of discomfort as things plod along. Haku hits a nice back suplex to finally break up the mundane grind.

The Hammer fires up, but plays to the crowd and gets cut off. The men finally start trading some chops, teasing the potential of what two stiff workers could provide. The Hammer downs Haku and tries for the figure-four.  Haku shakes that off, but ends up rolled up for the win out of nowhere right afterwards. This was a big bag of meh.

Power and Glory vs. The Orient Express

What a unique match!  Herc uses his power to control Kato, who answers with his martial arts. Herc tries to press slam Tanaka, and almost blows it. Roma and Tanaka then exchange agile moves to try and show up the other.

The momentum switches back and forth frequently. SEESAWMATCHUP!! Mr. Fuji trips Roma, setting up Slick and Fuji having a face off on the floor. Hercules runs in and wipes out both members of the Express to return the control to his team. Slick interferes next, yanking on the ropes and causing Kato to fall to the floor. The managers get mouthy again, prompting everyone to brawl on the floor and be counted out.  This was fun, if only for the unique all-heel psychology it provided.

At Home with Paul Bearer

Bearer has a dead body in his living room due to overcrowding at the funeral home. Another body is hanging out of a closet. He thinks about having a drink, and reveals he has bottles of blood instead of soda. Bearer shows off his dead plants, and ogles a WWF promotional picture of the Undertaker. His high school woodshop project is revealed to be a guillotine. “It put me at the head of the class…ohhhhhh yesss!”.  Silly, harmless stuff here.

The Ultimate Warrior vs. The Undertaker

The Warrior attacks before the bell, apparently annoyed by the Undertaker having attempted to murder him on national TV recently. Taker is clotheslined to the floor, where he lands on his feet. Back in the ring, Taker drops Warrior throat first on the ropes, allowing him to smother him with a face claw. Paul Bearer chokes himself with his tie in a creepy and hilarious auto-erotic display on the floor.

The face claw lasts several minutes. Warrior finally fires up and fights Taker off. Warrior does his rope dance, but Taker cuts his comeback off before it can start. Taker hits a flying clothesline, which the Warrior attempts to no sell, but he ends up crumpled to the mat.

Bearer produces a body bag and they attempt to zip the Warrior into it. They take too long and Warrior fires up. Taker is clotheslined from the ring. I don’t know how to comment on this one. It was almost impressively bad, and thus worth watching.

Final thoughts: Another piece of my childhood dies as I watch these men I saw as kings and conquerors having matches that were paint by numbers and uninspired.