Lord Alfred Hayes hosts this tape from some dilapidated house.  The Bushwackers show up and declare they are going to create a rec room here. The Wackers dress Hayes up like he is Bob the Builder, as Hayes protests.

Crush vs. The Berzerker

Berserker bumps around for Crush, as both men are HOSSES, but Crush is thicker. Berserker goes to the eyes, allowing him to bust out some clubberin’.  Crush eats a diving shoulder block and goes to the floor.  Berserker delivers a delayed piledriver in the middle of the ring, with the landing looking a little scary for Crush’s neck.

Crush is battered further, but fires up and tosses the Berzerker around with ease. He puts the brain squeeze on the big man. Berserker passes out from the pain rather than submit.  This was perfectly acceptable considering the participants. It was not too long, and had a few nice bumps.

The Bushwackers try to use math to figure out where to place a window.

A random pairing. Quake is still half of the Natural Disasters, so why not just make this a tag match?  Repo Man complains to the ref that Quake is too fat to wrestle. Quake dominates the early going with his girth and power, but gets caught with his head down by Repo. Repo Man hacks Quake to the mat as the fake crowd noise is pumped in.  Repo tries a top rope attack, but is caught and power slammed.  Quake hits the butt splash and this thing is over. A mercifully short match. Quake is a good worker, but as a face his size makes most heel offense rather impossible.

Gorilla Monsoon and Lord Al made inside jokes about “Marty Applebaum” or something like that being rich.  That name didn’t ring any bells for me – anyone?

The Bushwackers try and do some electrical work. They hand a wire to Lord Al and electrocute him.  The screen goes dark. We come back to the Wackers looking at Hayes’ corpse as they try CPR.

“Cooking for the single man” with Yokozuna: “Mean” Gene dines with Mr. Fuji and Yokozuna. Yokozuna eats over 5 pounds of rice a day to maintain his corpulence. Gene and Fuji argue over how to use chopsticks. They bring out trays of raw fish to eat. Gene is appalled.  Yoko tricks Gene into trying wasabi.

Gene uses broken english towards his guests in a manner that would not fly in this day and age. This thing drags on as shrimp, steak, rice and other food is introduced and prepared.  We get a montage of Yoko eating and eating and eating. This whole segment went at least 10 minutes, if not more. Yoko eats a lot. He is fat. Boo him! 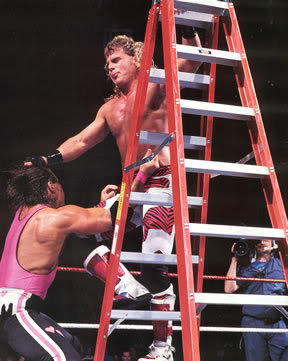 I believe this was the “test run” ladder match Hart asked Vince McMahon to let him compete in to show how the concept worked.  If I recall correctly, a rematch between these two was to then go down at Summerslam 1992, with the ladder gimmick making its “real” debut. The event switching from the U.S. to Wembley Stadium changed plans, and the Bulldog worked the Hitman instead.

The ladder is set up in the entryway. Sherri is at ringside with HBK.  The men exchange control of things in the opening minutes. Hart is finally downed long enough for Michaels to drag the ladder to ringside. However, Hart recovers with Shawn gone elsewhere, and he is able to jump his challenger. Hart tries to get the ladder in the ring, but Scary Sherri makes her presence known and stops him.  Hart chases her away, but this allows HBK to drag the ladder in the ring.  Hart gets back in the ring just in time to save his title from Shawn’s grasp. The fans are into the psychology of the match.

HBK uses the ladder as a weapon, jamming it into Hart’s midsection. Hart shows some heart as he fights back, but ends up being whipped into the ladder. HBK tries to climb the ladder, but Hart tips it onto him. Hart scales the ladder, but Michaels has enough left to cut him off.

The men fight at the base of the ladder, struggling to make headway. Shawn places the ladder in the ring corner as he and Hart fight elsewhere. HBK ends up being caught by the Hitman and slingshotted into the ladder. Bret goes for the gold, but Michaels successfully cuts him off before Hart can grab it.

The men charge into one another and both go down. Both men then try to scale a side of the ladder, only to fall off together as they struggle. Sherri distracts Hart, allowing Shawn to hit a superkick. Shawn then delivers a teardrop suplex, his finisher at this point. HBK climbs the ladder, but Hart manages to get to his feet and dropkick the ladder, sending Shawn crotch first onto the top rope, and then to the floor. That buys the Hitman enough time to snag the title and the win.

This held up incredibly well. The men worked in some ladder spots, thrills and some gentle spills. It was not the spectacle that TLC/Ladder matches are expected to be in the modern era, but this match was also not hampered by contrived spots that the modern bouts sprinkle in.

Hart tries to grapple with the giant. Kamala is more interested in trying chops and charges.  Kamala wants a test of strength, but Hart stomps on his feet. Kamala does successfully use his rough house tactics to take control as he chops, chokes and squeezes the champion.

Hart is able to dodge a thrust kick and deliver a side Russian leg sweep.  He knocks Kamala over again with a flying clothesline, then a monkey flip. Hart drops a second rope elbow and tries for the Sharpshooter. Harvey Wippleman and Kim Chee both scale the ropes. While the ref and Wippleman are arguing, Kamala tries to leap at Hart, but hits Kim Chee instead. Hart cradles Kamala for the win.

The heel managers gang up on Hart, holding him down for a Kamala splash. As Kamala leaps, Hart yanks Wippleman in the way. This was fun and Hart worked a perfect underdog babyface match against the beastly Ugandan.

The decision to suddenly end Ric Flair’s push once the Ultimate Warrior quit/was fired in October remains somewhat odd.  Instead of the abrupt title win for Bret Hart at some random TV taping in a frozen Canadian town in October, perhaps it should have been built up for the Royal Rumble, giving Hart a solid kick off to his reign.  Flair could then blame Mr. Perfect for the loss and their split can be used to build to Wrestlemania. Hart’s ultimate destiny of losing to Yokozuna at that event is another issue altogether.

Hart looks giddy during his entrance. The men go through an extensive feeling out process as they trade holds and counter holds with no overall flow. Hart works Flair’s arm before a cheap shot gives Flair control. The early going has been pretty nondescript.

Hart rallies by yanking down Flair’s pants during a sunset flip. Hart then delivers a series of quick clotheslines, sending Flair to the floor, where he face plants. That sequence woke the crowd up.

Flair cheats to cut Hart’s onslaught off, then begins to work Hart’s leg. Hart isn’t having that, and uses a knee breaker to begin his assault on Flair’s leg. He locks Flair in a figure-four in a tasty bit of justice. Flair fights to the ropes. Lord Al, apparently watching wrestling for the first time, asks if a submission will mean the title changes hands.

A sleeper from the challenger is reversed into a back suplex by Flair. Flair drives down a knee drop, but hurts his own leg upon impact. Flair delivers a knee breaker and cranks on a figure-four. Hart makes it to the ropes, but Flair continues to focus his attack on Hart’s leg.

Flair tries to go to the top, but Hart manages to slam him off. Hart starts to bust out his favorite moves: suplex, diving elbow, back breaker, etc, ignoring his previous knee pain as he drives Flair on his own aching legs.

Hart lowers the straps on his singlet, chases Flair down and delivers a superplex. Hart locks on the Sharpshooter. Mr. Perfect distracts the ref, then just climbs back down without further incident. Hart keeps the hold locked on and Flair surrenders the gold.

The match was fine, but should have been a classic with two of the best ever. I’ve seen others toss a bunch of stars at this encounter, but the flow was uneven for me, and Hart’s magic recovery from the figure-four is poor psychology.  Mr. Perfect just standing there as Flair was in Hart’s finisher was also an issue for me.  I don’t believe that was played up at all during Perfect’s babyface turn a few weeks after this, but I may be wrong.

A revived Lord Al watches the Bushwackers try and do some plumbing. Hayes is sprayed with water.  A fish comes from…somewhere….so Butch picks it up and licks it. Comedy?

The Undertaker vs. Razor Ramon

Razor avoids Taker, running in fear. This proves to be a ruse as Ramon jumps Taker once he has an opening. Taker shakes off the blows and begins mauling Razor with his hand wrapped around Ramon’s throat.  Razor clotheslines Taker to the floor, but Taker lands on his feet and continues to stalk his prey.

Ramon only gets in offense when Taker misses a move. A bulldog fails to keep Taker down, so Razor tries a chair, then the steel steps. Taker rises again. Razor looks flustered that every attack only leads to Taker rising back to his feet. Ramon lands at least six elbows, drawing Paul Bearer to the apron. Razor grabs the urn and whacks the Dead Man. Bearer gets the urn back in time to revive the Taker.

A now pissed off Taker delivers a chokeslam with gusto. That’s enough for Razor, who walks off. Ramon was the new heel in town, and this really did him no favors.  Taker was toying with the Berzerker and Kamala at this time, while Ramon was headlining with Savage and Hart at the next couple of PPVs, so the bookers probably should have protected him better.

Final thoughts: The Hitman’s trio of matches saves this one easily.  Go out of your way to see the ladder match!