I’d love to tell you who is hosting this, but he never tells us. It’s some young goof with a bad hair cut and an ill fitting suit. (It’ll probably turn out to be some indy geek and I’ll get heat.)  He isn’t a great host nonetheless. at times failing to keep the interview going by being unable to transition into questions. Anyway, on to the shoot:

George Steele was a genuinely nice man who tried to help the new talents out as much as he could.

Randy Savage was definitely protective of Elizabeth. Roddy Piper was terrified when he and Savage had to tape a skit for Saturday Night’s Main Event where he and Liz would be passing apples neck to neck. Verne Gagne discovered “Mean” Gene when he was in a pinch and needed an announcer for a TV taping two hour later. Gene was working in sales for a radio station.

Gene did not know the names for holds, so he made things up as he went along. He ended up coining several terms that stayed a part of wrestling lingo forever after.

Okerlund only had to work one or two days a week for the AWA but was making a nice living. The WWF offered to triple his salary to jump to the WWF in late 1983.

Hulk Hogan was raw when the AWA got a hold of him. They molded and improved his act until he exploded as a draw.

Gagne knew how to develop guys and help them improve their promos skills, even though Verne himself was not exactly a dynamite stick man.

Greg Gagne told RF Video that he and Verne had found a giant Russian for Hulk Hogan to face in a big time angle. Gene confirms that the Gagnes had a Russian Olympian lined up but Hogan went to the WWF instead.

Vince McMahon had a vision for wrestling and for merchandising Hogan that the AWA just could not fathom.

Brad Rheingans earned an Olympic bid in 1980 but the United States boycotted the games.

Gagne was a multi-millionaire and lost it all while fighting off the WWF. Vince had given him a healthy offer for the AWA but Verne turned him down.

Bobby Heenan was in the AWA for most of Gene’s run there. They then ended up in the WWF and WCW together. Okerlund helped convince Heenan to jump to WCW.

Okerlund went to Verne to try and see if he would be interested in matching or surpassing the WWF’s contract offer. The Gagnes were not interested in negotiating and were somewhat flippantly dismissive of Gene.

The WWF was not the sophicated machine that it is now back in 1984. They taped TV with a curtain serving as a set.

Okerlund was not a fan of doing play by play.

Gene was in charge of getting interviews over. Patterson was the master of booking finishes.

Cable was still a new medium, so closed circuit was the best means for the WWF to put on a big show and draw a massive amount of cash. The McMahon’s had very little cash in hand and badly needed Wrestlemania 1 to succeed or they would have been bankrupted.

Jesse Ventura and others were worried about what would happen to them if the WWF went under. Many of the guys had burned their bridges when they made the move to the WWF. Paul Boesch, Fritz Von Erich, Eddie Graham and other promoters were actual workers before and during their days leading their territories. Vince McMahon and his father were not wrestlers, but they had men like Arnold Skaaland, Gorilla Monsoon and others who were workers as well as key backstage office workers.

The WWE will always need an ace to lead the company. They are producing a huge amount of TV hours, which requires more men who can draw interest.

A lot of angles and feuds now are based on backstage skits and solo promos. “Mean” Gene would not serve much of a purpose if he was in his prime today.

With the success of Wrestlemania 1, the WWF knew that they would have to do a bigger and better sequel a year later.

Pat Patterson is a visionary who transcends wrestling eras. He can fit his ideas to meet whatever talent are being pushed.

Jimmy Snuka would be all over the place on promos at times and Gene would struggle to keep him focused. Okerlund jokes about what a nightmare a Snuka and Ultimate Warrior verbal battle would be.

Some angles were created without any real intention of them becoming “real” and instead were there to be fed to the dirt sheets to give them false leads.

Wrestlemania 3 was such a massive success that the game changed for the WWF forever.

Andre the Giant used massive amounts of adult beverages to shield the pain of his body falling apart.

Andre was a sensitive man. People would gawk at him and sometimes mock him and it made him depressed and bitter. He loved to drink and play cards with the other wrestlers as they were his comrades.

Gene would join Andre at some of the finest eateries around the world. The Giant owned a restaurant in Montreal.

By Wrestlemania 3 PPV was the main revenue source for the WWF to cash in on a one night event. The wrestlers upped their game for the card and big money was made by everyone.

“Mean” Gene voted for Donald Trump. He jokes that he beat Trump into the WWF Hall of Fame.

The territory era often saw a few guys “homestead” in an area for years as the star of stars for the fans to rally behind. Once things went national, the rate of talent burning out was sped up.

When David Schultz attacked 20/20 reporter John Stossel, Gene was only 10 feet away. Okerlund gleefully recalls the foolishness of Stossel accusing a huge, angry, Stu Hart trained bad ass like Schultz of being a phony. Stossel was paid off well in the ensuing lawsuit. The modern WWE now has insurance for such things.

Vince McMahon loved jacked up talent, but never told anyone to get on steroids.

The Hulkster wanted “Mean” Gene to team with him to headline a card in the heart of the AWA only a few months after both men had been key players in Verne’s promotion. He convinced McMahon that they could do the training vignettes and make entertaining TV. 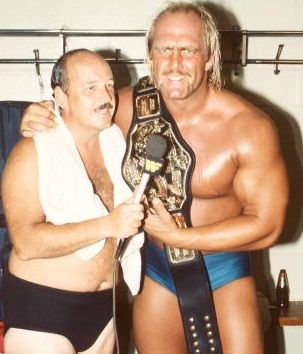 At this point, the interviewer realized they had to speed things up and we skip ahead in the timeline.

Gene ended up working over 300 days a year for Vince McMahon. The travel wore Okerlund down. This lead to Gene seeking Eric Bischoff out to see if WCW may want his services.

McMahon indicated to Okerlund that he supported the idea of Gene leaving. Okerlund signed a WCW deal and then the WWF sent him a legal letter telling him he had a 90-day “non compete” TV clause that had not been previously disclosed.

WCW offered far less travel and paid more than the WWF had been offering.

Hulk Hogan signing with WCW put them in a position to be competitive in the mainstream press and overall wrestling fan interest.

The first Nitro, with live TV and all the new faces, felt like a game changer and a kick start for WCW.

They start to discuss the Nitro Girls and who was the hottest. Gene reminds us that these gals are in their 50’s now.

The wrestling wars saw “Mean” Gene deliver dirt on his hotline, Bischoff mock the WWF on the air, and Vince respond by creating “Scheme Gene”, “The Huckster” and the “Nacho Man”. Gene was not offended as it was just what you had to do when in that situation.

A beer can was thrown at Hogan after his N.W.O. heel turn. It nailed Gene instead and busted open his nose. WCW was unable to do any close ups during Hogan’s promo because blood was not allowed on TV.

Hogan had to turn heel. The fans had turned on him and it was time. Hogan’s concerns over losing merchandise checks was remedied by the massive success of n.W.o. products.

The n.W.o. added too many guys and watered down the gimmick.

Bret Hart, Roddy Piper, Kevin Nash, Randy Savage, Hogan and others all had say in the creative process, which made it near impossible to keep cohesive angles since everyone was looking out for number 1.

Since Gene had a piece of the hotline cash, he ended up making more money during the n.W.o. angle than any other point in his career.

The Turner execs put their nose in WCW’s business once it became a success. They all wanted to show their muscle and toy with the product. The meddling helped sink the already shaky company.

Bill Goldberg and “Mean” Gene both signed multi-year deals with WCW only months before the company went belly up. Gene was allowed to keep his Turner contract and work for the WWE right after due to making an agreement to drop an insurance clause that Gene is vague about.

Bobby Heenan is still full of life, even with his major medical issues. When he is not attending fan conventions, he is basically bed ridden from the aftereffects of his treatments.

The “Confidential” segment about Miss Elizabeth dying got a huge rating.

Gene jokes that he was the cameraman for the sex tape that Hogan ended up accidentally being a part of. Bubba the Love Sponge is a piece of garbage for exploiting his friend while the Hulk was undergoing a hard period in his life.

The “Legend’s House” producers took away any TV, newspapers, or other outside entertainment to force the guys to interact. Gene was stuck sleeping with Tony Atlas, who farted all night long.

The Hall of Fame is truly an honor. It is a sign that the office and your fellow workers think highly of you. Hogan inducted Gene, which caused Okerlund to get a little nervous since Hogan started to talk about how he and Okerlund had chased women after the shows. Gene has been married for 53 years.

Roddy Piper’s death took a lot of people by surprise due to his relatively young age. Gene does note that he lived a hard lifestyle for a lot of years though. Piper’s promos were revolutionary.

Final thoughts: Despite being in his 70’s, Okerlund still has his voice, confidence and wit. This was a pleasure to watch.