Rick and Scott wrestled in school, but they never had any interest in professional wrestling. Both brothers tried football, however they never excelled at it and eventually focused on just wrestling.

“The Dog Faced Gremlin” was the bigger of the two by several weight classes, so they never had to face off on the mat.

Michigan was Steiner’s favorite college due to their logo, but he always figured getting in would be a long shot. His wrestling proved to be impressive enough to earn him a scholarship.

Steiner has the record for the fastest pin by a Wolverine.

Rick earned a teacher’s degree, but he was not happy with the money he was earning after college. Steiner turned to coaching wrestling for extra money and that led to Rick meeting George “The Animal” Steele. Steele push for Steiner to turn pro, but Rick wasn’t into the idea. Eventually the desire for money drove him to contact Steele, who in turn hooked him up with Verne Gagne.

Eddie Sharkey was the initial trainer for Steiner, but Brad Rheingans took over a few weeks in.

Learning how to bump and run the ropes was a big challenge, as none of that was natural for an amateur wrestler.

Rheingans ended up working with Steiner in his early matches, with some loose plans for the two to form a team. Steiner ended up being sent to Montreal, then to Mid-South for further seasoning.

Mid-South was a welcome change from the cool Canadian weather. Watts’ territory was a great place to develop and learn psychology. 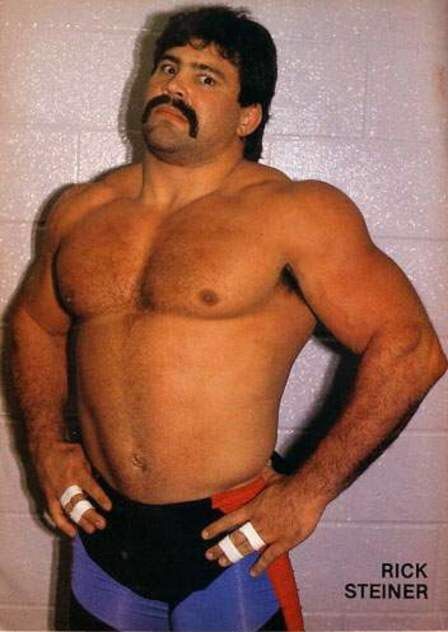 After working for Watts for a few years, Rick ended up in JCP after Jim Crockett bought the company.

Watts wanted to make money and didn’t care what skin color you were if you were a draw.

Erik Watts accidentally injured Arn Anderson during a match in WCW. Scott Steiner was pissed over the accident, and he stormed into Watts’ office and raised Cain. Other office workers in the CNN towers had to calm things down.

Since the NWA was loaded with talent, it took the UWF guys some time to find their niche and earn a push.

Being a heel was much easier than portraying a babyface. Cheating can garner a reaction and you don’t have to worry about kissing babies and shaking hands.

Dusty Rhodes told the Steiner Brothers that TV squashes were the time to get themselves over, so the Steiner pounded the jobbers they faced in order to get over as stiff, dangerous warriors.

Mike Rotunda and Dr. Death both did some shooting with Rick while in the ring due to their shared experiences in amateur wrestling. They were all professionals though and no one really tried to hurt the others.

While in WCW the travel became tedious, so guys would mess around to cure their boredom. The Steiners hung out of their car windows and tried to open other wrestler’s passenger doors as they drove past each other on the highway. The Steiners would also find eggs, milk, gravel and other objects to toss at the other’s windshields. Paul Heyman had his rented car wrecked due to the Steiner’s pranks and he ended up being banned from renting from a certain car company. This forced Ted Turner to pass a memo around warning the wrestlers to improve their behavior on the road.

Rick stripped DDP naked during a battle royal for a rib. Rick got in trouble, but it was fun.

DDP receiving his push due to being buddies with Eric Bischoff is discussed. Rick dances around saying anything derogatory and commends DDP for doing what he had to do to succeed.

WCW ended up developing a working agreement with New Japan which benefited the Steiners as their style meshed well with the realistic Japanese style.

Vader worked for both WCW and New Japan, which meant he and Steiner ran into each other a lot. Rick had helped Brad Rheingans train Vader in the mid-80s, so they went back years and years. Both Vader and Rick were stiff brawlers, and occasionally the men threw some real blows.

The WWF did not offer the Steiners guaranteed money, and in the long run the WWF booking Rick and Scott just was not as successful as either side had hoped. Rick doesn’t regret the experience of being there and it’s nice having the WWF on his resume.

Curt Hennig, the Nasty Boys, and others were into pranking other workers, much like the Steiners. Jacques Rougeau got pissed when the Steiners hog tied a midget in the cafeteria during a TV taping. The Steiners also caused issues between Ludvig Borga and the Quebecers by slashing someone’s tires and then blaming the incident on each other party.

The Steiners knew Kevin Nash from working with him in WCW, and suggested him to Vince McMahon when they were looking for a bodyguard for HBK.

Michael Hayes was scared of dogs, so of course the Steiners chased him with their dog multiple times while they were feuding in WCW.

Jim Cornette and the Steiners shared a mutual respect for one another. Corny was friends with Big Bubba, who was one of Rick’s best buddies in the business as well.

The WWF never delivered on their promises of big money and a push, so the Steiners decided to leave.

New Japan began to negotiate with the Steiners while they were still in the WWF. They asked McMahon if they could do Japanese tours in order to earn more money. Vince told them that he could not push a team who was not around full time, so he benched the Steiners while allowing them to work Japan. After a few months the WWF gave them a full release, which allowed the Brothers to talk to WCW.

The Steiners liked the WCW tag team roster because there was a lot of rugged teams who were willing to work stiff with the Steiners.

Konnan had been undercutting some of his Lucha friends on financial deals towards the end of WCW. Rick talked to Eric Bischoff and Kevin Sullivan and with their blessing he went into a match with Konnan with the intention of roughing Konnan up as punishment.

Rick tells a story about the night Haku, Curt Hennig, Rick Rude and others got into a bar fight with a group of marines. Haku cleaned house, naturally.

Billy Gunn had a mean left hook in a real fight.

Curt Hennig and Rick Rude suckered a cop into betting $1000 dollars for an arm wrestling challenge at a bar. The wrestlers had to make a quick escape after that to avoid the police force’s wrath.

Wrestlers always feel like they have one more match left in their gas tank, which can sometimes end in disaster like with what happened to Sting against Seth Rollins in recent years.

Bill Watts was disgusted with the way Koritsia Korchenko was throwing kicks. When Korchenko gave him some guff over complaining, Watts ended up shooting on him and basically chasing him out of the business.

Sting and Eric Bischoff helped convince the Steiners to split up in WCW due to a lack of tag teams worth working with. It would also freshen up the angles.

Chris Benoit originally met Rick while he was learning in the New Japan Dojo. Benoit had issues with Rick later in their careers due to Steiner treating him like a junior heavyweight and tossing him around stiffly.

WCW failed because the wrestlers were in control and not the management. The big contracts caused WCW to become a target of the bean counters when Turner was merging companies and the whole thing sunk.

Steiner hurt himself taking a table bump in TNA. The lingering injury convinced him it was time to find a different line of work.

Dixie Carter does not know what she is doing and Billy Corgan will not be the answer to fix TNA either.

Due to the heat the WWE has with the Steiners, a Hall of Fame spot is probably not going to happen.

Scott Steiner is rich, and gives no fucks. He is very willing to tell off anyone who upsets him, which has caused problems with Hulk Hogan, Ric Flair, and others.

In 1995, Rick Rude, Big Bossman, Curt Hennig and Rick started to buy houses to flip. He now has a realtor’s license.

Rick closes by saying he and Scott wanted to make the fans question how real their matches were thanks to their stiff moves. He has no regrets on his career as he was able to travel, make big money and win titles.

Final thoughts: Rick was well spoken and had no reason to hold back his thoughts, making for a fun and informative interview!