George never sought out to join wrestling. She and Randy Savage met one night at “The Dollhouse” – a Tampa Bay strip club – and the two hit it off. George wound up as his valet in WCW a bit afterwards because otherwise Torrie Wilson was going to get the gig. (I’m not sure that timeline matches up as Wilson was already in WCW tied up with the Flair family by the time George debuted, I suppose plans could have changed.)

After 22 years of “working” in wrestling, George is retiring to focus on being a food blogger.

She watched Hulk Hogan’s “Rock n’ Wrestling” cartoon when she was a kid, so it was very surreal to meet Hogan and Mean Gene in real life.

Savage was “normal” at first when it came to being possessive, but eventually he turned to locking her in closets at wrestling events in order to keep her away from the boys. At home Savage had hidden cameras installed in their house to keep tabs on her, and paid others to follow her. He also tracked her phone use.

“Macho Man” was good with kids, but he didn’t want anything to do with them in his personal life. George had a young son who Savage ignored whenever possible.

Lanny Poffo and Savage didn’t really get along. Poffo has gotten a bunch of press since his brother died by playing off his brother’s success and status as a beloved superstar. When Savage was alive, Poffo rarely saw his brother.

Poffo had George banned from the WWE Hall of Fame ceremony the year Savage went in.

Savage convinced WCW to give his brother a six-figure contract while Savage was still working on top. Poffo didn’t bother getting into shape for the gig and thus was never used.

Poffo was supposed to use the gimmick “Gorgeous George” and play an effeminate blond heel. Since Savage had the rights to the gimmick, he gave it to his girlfriend once Poffo was evidently never going to be used as a WCW wrestler. Poffo created a fuss in later years over George using the name at conventions, so she had her name legally changed to circumvent that. Savage and George once did ecstasy while sitting on the beach. While under the influence, Savage admitted to having had a sexual relationship with Stephanie McMahon. Lanny supposedly admitted as much to the interviewer in the past as well.

Macho Man got physically rough with George at the end of their relationship. Once George ended their relationship, strip clubs kept using “Gorgeous George” on their marquees to promote her appearances. George asked them not to because Savage owned the name. Eventually, George was served papers which said Savage was suing her for using a copyrighted name for financial gain.

George can’t imagine how the modern women take so many bumps as she’s still hurting from some falls she took in WCW.

After WCW, Holly helped George contact some ECW talent and got her booked. Tommy Dreamer was “awesome”. George plans on visiting Dreamer at his New Jersey wrestling shows soon.

Jeff Jarrett briefly used George in TNA. She isn’t sure why she was “fired”. Her only guess is an incident that went down at an airport where she asked for assistance with a ticket that was not made out correctly. Terry Taylor was called up since he was in charge of tickets and he screamed “Tell Gorgeous George to get fucked!”

George worked as a webcam whore for two days prior to her wrestling run. The video she made haunted her for life as the company used her later fame to promote the tape. Savage sued them for 1.5 million dollars for promoting it while using his name. George never saw any money from the settlement.

Now George is a cannabis advocate. “I don’t even smoke it – well I do…”. She plugs the health benefits while also mentioning how her abuse of it made her lazy.

Some WCW talent was upset since her role with Savage gave her first class airfare and limo service paid for by the company. 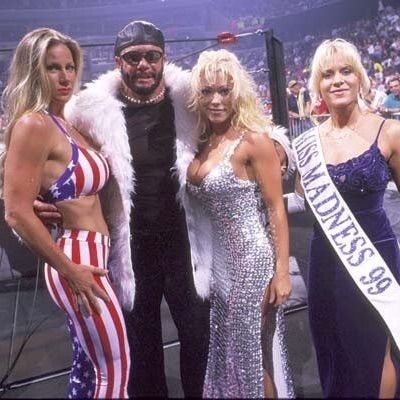 Savage was a bit of a man-child since he had been an athlete his whole life and never worked a normal job.

Macho Man was doing a lot of drugs while in WCW. He was allergic to cocaine, but still did it from time to time. He also dropped acid, then dragged George along on long drug fueled car trips.

Often when Savage would go and visit his parents Lanny would be there, which would trigger Savage’s anger. He’d eventually drive home in a huff, driving erratically as he raged out. The road he would drive on is the same one that he was on when he had his fatal heart attack. George suggests that when he died he was once again raging out and finally wound himself up so much that his heart gave out.

George was being given $1000 dollars a week by Savage to go and buy narcotics to fuel his drug binges.

Hulk Hogan and Savage had a love hate relationship. Savage was jealous of Hogan, but loved him nonetheless. He’d be ranting about Hogan all day, then go out to eat with him at night.

At the time they met George was dating a drug dealer. She wanted to get out of that life, and started dating Savage, not knowing he was hiding his drug abuse from her during their first months together. George had seen people on ecstasy and wanted nothing to do with it, but Savage was hooked and so she did it with him. Savage would stay up all night on drugs, sometimes even involving George’s 17-year old sister in the drug binge.

Savage had OCD and had to have everything supremely clean. George found out his maid was stealing, so she convinced Savage to let her clean up instead. So while George was cleaning one day, she discovered Savage had hidden cameras all over her house. This included videos in the bathroom and her teenage sister’s bedroom.

The final straw in their relationship was when a drug fueled Savage asked George if he could have sex with her sister while George was sleeping.

George ended up dating a member of the Misfits band after Savage and her broke up. They met in WCW when the Misfits were running around with Vampiro.

After telling the interview that she wanted out of the wrestling business, she plugs her contacts here and promises her rates are cheap for bookings.

Cannabis products are discussed again. While plugging their benefits, George describes how overdosing on some brownies made her vomit and pee her pants. Well, I’m sold!

George claims that a group of WCW fans flipped the car that she and Savage were driving in due to their heel heat. (I don’t believe her.)

Final thoughts: Well…I don’t doubt all of her stories, but I think she’s at least exaggerating some of them.  If you like sleaze and have an hour to spare, this is surely worth a listen.