Dillon explains that the Four Horseman were put together quite by accident as the guys all ended up in one interview segment due to time constraints. Tully Blanchard was managed by Dillon, so he joined all the heel champions for the segment. Arn Anderson came up with the “4 Horsemen of the Apocalypse” analogy and the fans quickly picked up on it. 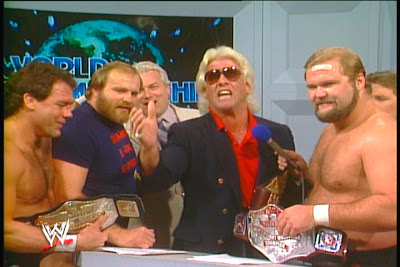 It took a few weeks for Jim Crockett to take note of the fans responding and reacting to the “4 Horseman”.

Dillon struggles to remember some names, which causes Tully to quip “You should have stayed out of those cage matches”, which draws a laugh from the crowd.

J.J. continues explaining that the heels in the Horsemen were all established stars, which wasn’t usually the case when a group was put together. They all had big egos, but they were confident in being able to hold their own in so that they were not jealous of one another.

Ric Flair loved to party and he often cohersed the rest to join him in his revelry.

Blanchard jokes about being in a good spot due to feuding with the booker (Dusty Rhodes.)

Dillon explains that the Horsemen could lose and and yet keep their heat because of the promos they could cut, which gave them their heat back.

The top babyfaces were often ganged up on and beaten down, which gave the Horsemen an edgy form of heel heat.

Between the Horseman’s promos and the announcer’s commentary, everything which as shown on TV was done so in a manner that could be explained realistically to the fans at home.

Rhodes had feuds planned out step by step in many cases. Tully breaks down some of the highpoints of his feud with Magnum, explaining how the heat grew and grew over a series of months.

Magnum finally speaks, almost 20 minutes into the panel. He talks about how he and Blanchard battled all over the territory. He jokes that he probably redefined the word “stiff” with some of the blows he threw at Blanchard. Tully brought out the best in him, an ability which few other opponents had the skills to match.

The Horsemen were all so good that the guys pushed each other without saying a word. Whoever wrestled first set the bar and the next guy up went out to one up that performance.

The babyfaces the Horsemen worked with were among the best in the business, which not only made it easier to have great matches, but also draw big houses.

After Magnum’s car accident the Horsemen made a point to sneak into the ICU late in the night to visit him as he hung in a device meant to keep his blood flowing. J.J. breaks up while talking about the memory.

Dillon shows off the device Magnum uses to get around now. It is so cumbersome that he can’t fly with it. T.A. spent a week traveling by car to come to this fan fest.

Magnum explains that he never prayed to God for a cure, only for the ability to handle what life had handed him. T.A. then breaks into a motivational speech.

The moderator asks about the rotating members of the Horsemen. Blanchard makes a crack about Ole Anderson getting fired.

Dillon tells a tall tale about Bruiser Brody beating up Lex Luger in a cage match, thus forcing the Florida booking office to send Luger to JCP. In reality, Brody no sold some of Luger’s stuff due to Luger being cocky backstage and Lex freaked out and left the cage. J.J. really romanticized the whole event.

The guys struggle to remember the history of how Barry Windham turned heel and joined the Horsemen. The fans in the audience jump in with the details. Dillon takes us back to the battle royal where Luger turned babyface by going against Dillon’s orders and refusing to eliminate himself from the match so Dillon could win it. He chucked Dillon and basically declared war on the Horsemen.

Tully is not sure why Ole Anderson was not given a spot in the WWE Hall of Fame when the Horsemen were inducted. The men who did go in (Flair, Arn, Tully, Windham) were the best of any of the foursomes that came together over the years as Horsemen.

Blanchard explains that JCP was not paying him or Arn fairly, and that’s why they jumped to the WWF and effectively killed off the Horsemen in 1988.

Dillon was not thrilled with JCP being sold to Ted Turner. Blanchard served as a mediator between Dillon and Vince McMahon as Dillon negoitiated an office job with the WWF in early 1989.

Wrestling with my remote: JCP: The Good Old Days

The Horsemen would often hang out together on their off days as they were genuine friends.

Blanchard and Magnum both have books coming out soon. They joke about comparing notes to make sure they don’t send mixed messages.

A fan asks about the night the Horsemen broke Dusty’s leg to set up Starrcade ’85. Magnum and Tully are both completely befuddled by the description and can’t recall the incident.

J.J. recalls how bad he felt the night he was booked to shove Magnum and steal a bag of money that T.A. was holding. This was after T.A.’s accident obviously. Magnum jokes that he was so stiff in the ring that he probably had a few receipts coming anyway. (For the record, Dillon did not shove him during the angle.)

Dillon cracks the room up with a story about how a certain limo driver hated working for Flair because Ric would keep him out all night while carousing.

Blanchard recalls the crazy, busy weekends the Horsemen had as they worked upwards of 4 or 5 times, including TV tapings.

The only time the wrestlers ever got to sleep was when they were flying.

Final thoughts: At only an hour, this was a breeze to watch. However, the guy’s can’t even remember their own careers anymore, so a panel on their history is ultimately a waste of time to sit through.