Mongo, Bischoff and The Brain are in Bears jerseys – Mongo in his own number, Eric with the number “1” and Heenan hilariously has a “?”.

Sting interrupts them and promises to solve the issues between Luger and Savage.

THE SHARK vs. The Man Called Sting

Tenta has a “Jaws” rip off theme. Sting looks roided up. I’m still amazed Tenta altered his tiger tattoo to match this gimmick.  Did he really think he’d be “The Shark” forever?  Did WWF threaten a lawsuit over “Avalanche” being too close to “Earthquake”? Barely a match as Sting hits a series of Stinger splashes almost right away and finishes Tenta with a flying crossbody.

We don’t linger on Sting’s celebration, as we have to show the replay of Hogan’s beatdown from last week for the second time in the first 10 minutes of Nitro. It’s amusing that Hogan suffered a “serious neck injury” but it’s the shaving of his mustache causes the announcers to get all bent out of shape.

J.L. is a masked Jerry Lynn.  Why did he need a mask? Crowd chants for Sabu. Sabu propels at J.L. for a series of flying leg drops.  J.L. rallies with a plancha to the floor. Smark crowd chants “Hogan sucks!” Sabu launches himself on J.L. on the floor and flies off a chair into J.L. Both men trade some stiff blows in the ring. Sabu with a moonsault gets 2. J.L. hits a stiff DDT off the ropes. Sabu tries a frankensteiner from the top rope but JL blocks it. J.L. launches at Sabu but is caught with a powerbomb. That sets up a Sabu camel clutch for the submission.  Sabu powerbombs J.L. off the ring to the concrete afterwards but we cut back to the announcers instead of following the action so Eric can talk about HULK “POOCHIE” HOGAN.

I love the Hulk, but pushing him in every segment is overkill.

Sting, Lex Luger and Randy Savage interview. Sting keeps them from brawling. Sting says all 3 men want the World title and gets in Savage’s face and warns Savage to not strike him or Randy might bite off more than he can chew.  Savage is to face Kamala at Halloween Havoc and Luger has a rematch with Meng.  Sting suggests if both men win, then they should wrestle each other later that night.  Savage is down for that but Luger wants to wiener out, so Sting calls him out on his lack of testicular fortitude. Sting’s sick of having to defend Luger’s actions. Luger agrees to the stipulation.

We see Chris Benoit get out of a limo as Bischoff pushes him as an international superstar.  Benoit delivers his one line “WCW, Where the big boys play…we’ll see” very stoically.

Disco Inferno dances. Heenan loves it and Mongo and Bisch shit on it.  They cut Disco’s theme off from the P.A. so Disco whips out a boom box with his theme playing and keeps dancing. LOL. Disco’s a guilty pleasure of mine on here so far. Big Bubba comes out and eyes up Disco.  Then Road Warrior Hawk is introduces and he gets in Inferno’s face and scares him.  Disco sneaks up behind Hawk and hangs a hat on one of Hawk’s spikes and runs away.

Bubba pounces right away with kicks and punches as the crowd chants “LOD”. Hawk retaliates with a powerslam. Disco Inferno comes down and dances so Hawk rips his shirt off and roughs Disco up.  Bubba wins by count out.  Another non-match that was over before it started and again instead of talking about Hawk losing or whatever we get Eric telling his daughter who is watching at home “Don’t worry honey Hulk Hogan is here tonight!” “HOGAN NEXT!” Bleh.  Not sure what the point of this was since Hawk is feuding with Kurasawa.

Hulk Hogan promo, Hogan comes down dressed all in black. The games are over, Hulk is going to play by The Giant’s rules.  Hogan says Vince McMahon’s ego got too big so Hogan had to take Hulkamania elsewhere so it could grow even larger.  Hulk knows Kevin Sullivan wants to kill Hulkamania. Hogan compares his mustache with THE WASHINGTON MONUMENT. “Shaving my mustache was like burning the American Flag brother!” Oh Hulkster! Hulk plans to make it to Heaven someday so he can beat Gorgeous George.  I hope Hogan wasn’t drug tested before this promo. We cut to the Giant’s monster truck roaring into the backstage area being chased by several cop cars.   WCW security blocks them.  The Giant is banned from the building, so Hogan marches to the back to find him instead. What a wacky segment!

Heenan is all hyperbolic on the size and danger of monster trucks and talks about more cops being in the back than when Capone was taken down. Eric tells him to shut up. Poor Brain.

They go at each other right away since TV time is short. Can’t talk about Hogan any more, so we instead go to commercial a minute in. They clash on the top of the cage (standing on the ropes) and Arn ends up crotched. Cage is barely 7 feet tall at the most and looks sort of flimsy. Both men grind the other’s face into the cage. Flair dances a bunch and suplexes Arn and suddenly Ric is dead tired. So how could you have the spunk to dance Ric? Pillman runs down and climbs the cage, and Ric punches him down. Ric goes for the figure four but Arn hits him with brass knuckles for the pin.  Another ultra quick match. Flair challenges both men next week and promises to search the globe to find a partner.

Shawn Michaels, Diesel and The Undertaker vs. Yokozuna, Owen Hart and The British Bulldog

Yokozuna sells being scared of the Undertaker’s “dong” – a nice call back to their feud from the prior year. They show a clip of Shawn doing charity work and he manages to come off as unlikable even then. – His choice quote: “You desire your whole life to have people think you’re important, and then you find out they do and it’s pretty cool.” He manages to mention the kids at some point. Fuck you prick. Is it any wonder he got his ass beat at a bar less than two weeks after this?

Shawn controls Owen early on, leading to a six-man donnybrook and the crowd is hot!  It takes Diesel and Taker combined to dump Yokozuna. Waylon Mercy is watching from the entranceway, as he has a match with Diesel on Superstars. Shawn falls into a long babyface in peril segment.  Dean Douglas is seen in the entryway scouting Shawn. Michaels takes close to a 10 minute beatdown, through two commercial breaks. Diesel finally gets the hot tag but his momentum is stilted quickly by Owen Hart blasting him from outside the ring. Bulldog powerslams Diesel and Yoko adds a legdrop as Bulldog pins Diesel!

King Mabel attacks Undertaker and he and Yoko squash him in the turnbuckle. Dean Douglas attacks Shawn and Bulldog keeps Diesel at bay.  Taker suffers a series of legdrops, elbows and splashes from Mabel and Yoko. This would legitimately cause an eye socket injury to Undertaker and take him off the PPV.  Mabel has legit hurt Nash and Taker now in a 6 week period, so no huge surprise that he was fired by the start of the year.  Excellent beatdown by the heels to give them some nice heat.

We get essentially “filler” for a segment now as we revisit SummerSlam ’95 and watch a big chunk of Bret Hart vs. Isaac Yankem to help build to a steel cage match between the two of them next week.

Fatu went from jungle dweller to urban jungle reformer. Sunny is amazing looking as per usual.  Skip targets Fatu’s head for much of his offense and since Fatu is Samoan this doesn’t work.  Even Vince calls him an “idiot” on commentary for his offensive choice. Skip ultimately hits a flying headbutt that ends up hurting himself, then fails to get a superplex, is knocked off and splashed for the pin. Poor Skip.

We close with the Bulldog wearing a silly hat: 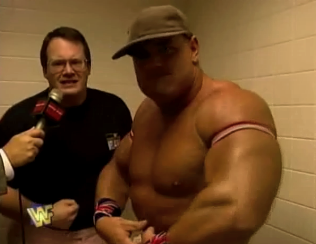 He and Cornette cut a promo on Diesel for the PPV and King Mabel joins in to threaten The Undertaker.

Good Lord did this show fall off a cliff after the first 25 minutes. Nitro in all its rushed glory wins this week.  RAW had the best angle though.  That Hogan promo is a must watch.