Randy Savage is “injured” from the attacks of Luger and the Dungeon last night at Halloween Havoc. Ditto Sting from his extended beatdown from the Horsemen.  Hogan is also AWOL.

This will be a test of Eddy’s ability to carry a sack of crap to something watchable. Pittman tries for takedowns and he hits Eddy with a pair of suplexes. Eddy responds with a gut wrench suplex of his own. Pittman downs Eddy with armwork.  Bischoff says he heard rumors that Bill Clinton ordered Halloween Havoc. Another suplex from Pittman. Eddy with a crossbody and Pittman belly to belly suplexes him. Another suplex. Eddy wins with a “fluke” roll up. Well we learned Pittman knows how to suplex a guy. Next please.

Scott Norton vs. The Shark

This stems from the first Nitro where these two had issues as well as last week’s locker room fight. Tenta clubs him and squashes him with a belly to belly. Tenta stays up from 2 clotheslines and a flying shoulder block from the top rope. A body slam finally gets Tenta off his feet. Double clothesline. They brawl to the floor for a double count out. Not a bad hoss match.

Heenan leaves the announce booth to hang out with Sonny Onoo. Heenan goofs and talks about “Saturday Night’s Main Event” when he talks to Onoo about WCW’s TV shows.   A deal is reached between Heenan and Onoo but we don’t yet know the details…

We see pictures of Ric Flair’s turn against Sting last night. Brian Pillman, Flair and Arn Anderson come down for an interview. Pillman says the Horsemen are a “dynasty” not a gang. Arn says the fans wanted the Horsemen back and they should be careful what they wish for. Arn promises a 4th member soon. Flair tells Sting the Horsemen will be ready to fight next week.

This should be a train wreck. Disco is grooving so Sabu slaps him in the face. Sabu flings himself at Disco in multiple fashions. Inferno gets a facebuster and chokes Sabu.  Crowd chants “Sabu!” Disco misses a charge and Sabu hits a diving legdrop for the 3 count. Sabu plunges on Disco afterwards.  A table is set up but Disco moves and Sabu smacks into the table, which doesn’t break! OUCH.

This is your alleged main event. The Males lost the tag titles back to Harlem Heat on WCW Saturday Night, and I don’t think that was mentioned on the PPV nor is it mentioned now. They go to commercial right away since no one cares anyway. Riggs get beat down for most of the match. Bagwell comes in like a house of fire and gets a visual pin on Luger after a series of clotheslines. Jimmy Hart distracts the ref long enough for Meng to hit Bagwell and Luger wins it via the torture rack. Meh. I don’t think Luger needed to show that much ass here.

Kevin Sullivan, Jimmy Hart, The Giant and Lex Luger promo. Kevin Sullivan promised Hogan that Hulk had a wolf in his hen house and it proved to be true as Hart was the mole all along. Hart won’t explain why he did it “Maybe next week” Lame. Giant will “defend” the world title next week.

Ugh.  What a mess this show was. 2 matches that had no chance to be good on paper (Disco/Sabu and Eddy/Pittman), a glorified squash match for a main event and the heels didn’t even reveal the secret contract that Hart had signed for Hogan at Havoc that actually did award the title to the Giant.  This whole hour was an infomercial for next week’s Nitro.  With Hogan, Sting and Savage all selling injuries, the babyface roster was depleted and it really made the show feel second rate. 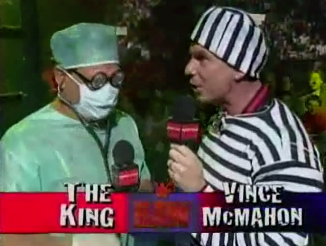 Vince and Jerry intro the show in costume and Lawler riffs on Vince’s court woes from the prior year.

This could be ugly. Goldust is “methodical” and Savio is usually the shits. Savio is attacked when the lights are still out and suffers some mule kicks to the ribs. Savio flurries back but misses a dropkick. Savio has his shoulder rammed into the steel and that gives Goldust a spot to focus his attack on. Goldy’s rest holds force Vince and Jerry to entertain themselves by making fun of the others’ costume. Vega dodges a corner charge and gets a brief comeback. Savio misses a spin heel kick and Goldust rolls him up for the pin.  Fairly blah affair.  Goldust hasn’t settled on a finisher yet evidently.

Gee I wonder what’s on Nitro? Marty wins a squash.

Jim Cornette, British Bulldog and Clarence Mason have an in ring interview. The Bulldog wants to face Bret Hart at Survivor Series since the contract for his match with Diesel at the PPV stated that whoever won would face Bret.  Mason is there as the legal muscle. Why he wants to face Bret and not the World Champ is not explained. Bulldog switches his focus to his opponent for next week, Marty Jannetty. This draws out Marty, who dropkicks the Bulldog and then gets in Mason’s face but stops due to threats of legal rebuttal.

So how’s that Vikings/Bears game doing over on ABC? 123 Kid apologizes to the Gunns for attacking them after their match on the last PPV.  Nothing else to see here.

Bret promises to be the “truck stop” on Diesel’s road as champion come the Survivor Series.

Undertaker is coming back, smashed face or not says Paul Bearer in a graveyard…

Owen earned this by winning last week’s battle royal. These 2 are actually on the same “Wildcard” team at Survivor Series, which adds intrigue to this bout. Owen is clotheslined viciously over the top rope before the match can even begin.

The more I see of Razor and his crowd response, the more I wonder if he should have gotten Diesel’s push – or maybe Bret’s upcoming run with the belt. Razor vs. Shawn III at Mania could have been built up well and we could have had Razor vs. Nash, Bret and Taker headlining PPVs til then.  Razor could give the Kid some title shots on RAW to finish that feud and Kid could move on to something else in the new year. Of course drug use is always a factor in pushing Scott Hall.

Owen stomps back in and works some flippy takedowns, but Razor hangs on and ends up in control of Owen’s arm. Owen kips up but Razor remains in control of his arm and forces him back down. Owen is tossed around by his arm and Razor clamps back down on it. Owen finally escapes by flipping over Razor but he pauses to cheer and Razor takes control right back.  Owen is tossed and Jim Cornette is blasted for good measure. Yokozuna waddles down as we go to commercial. They come back to Owen still having his arm worked over. Owen finally gets some offense in after chucking Razor to the cement. Hart hits a top rope dropkick and chokes Razor over the ropes.  A back rake pisses Razor off and he opens up with fists on Hart. Owen responds with a spin heel kick for a near fall. A flying elbow gets another close fall and we go to another commercial. We return with Owen clamping on a sleeper and Razor reversing it to a back drop.  Razor tries a back drop from the top rope, but Owen reverses his momentum and lands on Razor, but Razor rolls through for a near fall that I bought as the finish. ANOTHER commercial! We come back to Owen being propped up in the Razor’s Edge but Yoko slips in and helps Owen escape. He drops Razor with a clothesline and flattens him with a leg drop. 123 Kid runs in to save but Yoko lays him out and leg drops him too. Ahmed Johnson debuts and SLAMS YOKOZUNA!!  Bulldog runs in and decides not to mess with the scary black man. Hell of a debut there! Good match.

With Nitro peaking with a Shark vs, Norton match, how can you not give RAW the win after that finish?