Larry Sharpe yells about cookies and retiring Jerry Lawler.  Bam Bam is wearing a shirt that says “Bad Guy” in case you were curious which side he resided on.

Bigelow is working in a too small T-shirt and shorts.  He looks like an indy geek.  Bigelow tosses both men around at will as Sharpe screams on commentary. Lawler runs in with a chair and smacks Bigelow on the head.  Bigelow no sells that and Lawler freezes. Bigelow clotheslines him out of the ring. Lawler grabs the chair but the jobbers pull him to the back.

J.D. Costello, Mr. Universe (Who?) and one of the MOD Squad cut a promo. They are planning to win all the gold in the area. Costello then tells “the minorities”  to buy some shoes instead of watermelon and fried chicken. JESUS.

Universe is fairly jacked up. He shares a resemblance to Hercules with his wild facial hair. 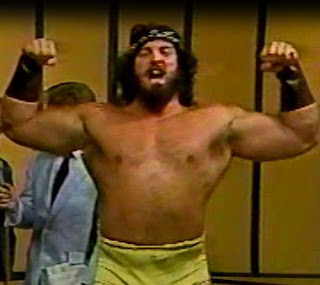 The internet tells me that Mr. Universe was a Larry Sharpe trainee who worked WCCW as “Spike Johnson”, then did little else other than this Memphis run. Universe was not smooth here. His chops, suplex and clothesline all look sloppy. He then tries a press slam and almost loses the jobber, so he chucks him to the mat violently. A leg drop sets up a pin attempt which Jamison actually kicks out of! A bear hug finishes things up. This was delightfully awful!

“The Mystery Team” vs. Fire and Flame

The heels are in the ring when Phil Hickerson and Joe LeDuc charge in and clear the mat of the villains. The heels want to quit, but promoter Eddie Marlin promises to strip them of the tag team gold if they do not compete.

Once the match begins, LeDuc and Hickerson take turns pounding the heels. Hickerson won’t fail any steroid tests. Maybe one for diabetes?

The heels use a foreign object to wound Hickerson, leaving him vulnerable for their extended attack. Hickerson is cracked with the object several times to keep him down. Finally Flame drops the object and Hickerson is able to grab it. A four-way brawl breaks out. Hickerson tears at Flame’s mask with the weapon. The heels realize all is lost, so they smack the ref to earn a DQ.  The brawl goes to the floor, where the heels are tossed into the post and a table. LeDuc adds some chair shots. Finally the heels are able to escape. Blood and brawling is the basis for any good segment I reckon.

Rough and Ready are “The Dirty Black Boys” under a much less racially insensitive team name. The heels are all basically glorified jobbers, so the faces take turns working over whatever victim is in the ring. Tanaka hits a few flashy leaping elbows, then he and Jarrett wipe out Rough and Ready with simultaneous moves and score the easy win.

Jeff Jarrett and Pat Tanaka vs. The Renegades

The Renegades are two jabronis in white masks. One is white and one is black. The white kid bumps super awkwardly, as he is obviously really green. Tanaka wins with a bridging back suplex. Easy win for the faces.

Larry Sharpe cuts a promo on Lawler. Bigelow makes faces in the background. Sharpe is essentially Paul Heyman, and Bam Bam is the silent killer Brock Lesnar in this scenario.

Bigelow mauls both men with forearms and fists. Bigelow is in all black this time, which is a much better look for him. Bigelow squeezes both men in a dual bear hug to earn a submission win in short order.

“Don’t Go Messin’ with a Country Boy” plays as Stan Frazier is greeted by screeching fans. I guarantee Amazon does not have the rights to that song as even the WWE doesn’t bother to pay to use it for their own network.

Stan Frazier and Jerry Lawler vs. Mr. Universe and Nighthawk

Nighthawk is a tall dude. It seems he may be rookie Sid Vicious, before he juiced himself to the max. Lawler uses his speed advantage to avoid being mauled by the two power men. Frazier tags in, gets a shot off and gets out.  He was falling apart physically in the WWF already, and this is several months after his run there ended.

Universe convinces Lawler to try a test of strength. Lawler goes down from the power grip. Universe mouths off, so Lawler pops him. Nighthawk tags in and squeezes the “King”. Frazier tags in and tries more punches, then tags out before he has to do any bumping.

Lawler sells and sells for Universe as he eats punch after punch. Finally, the King has had enough and he drops the strap.  Lawler downs Universe, but misses a fist drop.  Nighthawk tags in. He downs Lawler and goes for a pin. Lawler taps him on the shoulder, confusing the rookie. When Nighthawk stands up to celebrate, Lawler rolls him up for the win. Frazier was a car wreck, but seeing Lawler try and guide rookie roid monsters through a match was unique fun.

Jerry Lawler and The Killer vs. The Scorpions

The Scorpions are the millionth masked tag team we have seen in this one hour compilation. The Killer is Eddie Crawford aka the Snowman, also in a mask. Lawler gives the masked men some offense, keeping things basic. The crowd is screaming regardless the fact that the heels are geeks.

The jacked up Killer hits a powerslam and press slam before Lawler hollers to tag him back in. Killer hits a shoulder block and Lawler end things with a fist drop.

We get a music video for Kabuki. He appears to be wearing a Darth Vader helmet for part of it. We see him misting our heroes in between scenes of him working with swords. Ominous music plays over it all. Good package.

Final thoughts: If your particular fetish is masked jobbers, this video is for you!  I did enjoy watching Bigelow pound geeks and the disaster that was the Mr. Universe match.