Only a year earlier, Memphis was home to a plethora of upcoming stars such as Rick Rude, King Kong Bundy, Randy Savage, the Rock and Roll Express and others. At this point in time, Jerry Jarrett found himself trying to rebuild his roster, while finding a place for his version of wrasslin’ in the new reality of national promotions gobbling up talent. Bruiser Brody had just been vanquished by Lawler, so a spot was opened up for some fresh heels on top.

The Fabulous Freebirds had been true vagabonds since departing World Class. They had made stops in JCP, the WWF, Florida, back to World Class, the AWA, and so on. At this point, it was time for them to return to Memphis and give the fans a dose of their special brand of chaos.

Michael Hayes came in as a babyface. He wound up battling Tom Branch, who was serving as the manager for Bota the Witch Doctor. Bota ended up attacking Hayes, with Jerry Lawler coming down to make the save. Later on the same show, Lawler beat Bota for the Southern title. After the match, Bota and Branch doubled up on Lawler. Hayes repaid the favor and saved “the King”. During the melee Lawler attempted to toss a fireball at Bota and burned Hayes instead. 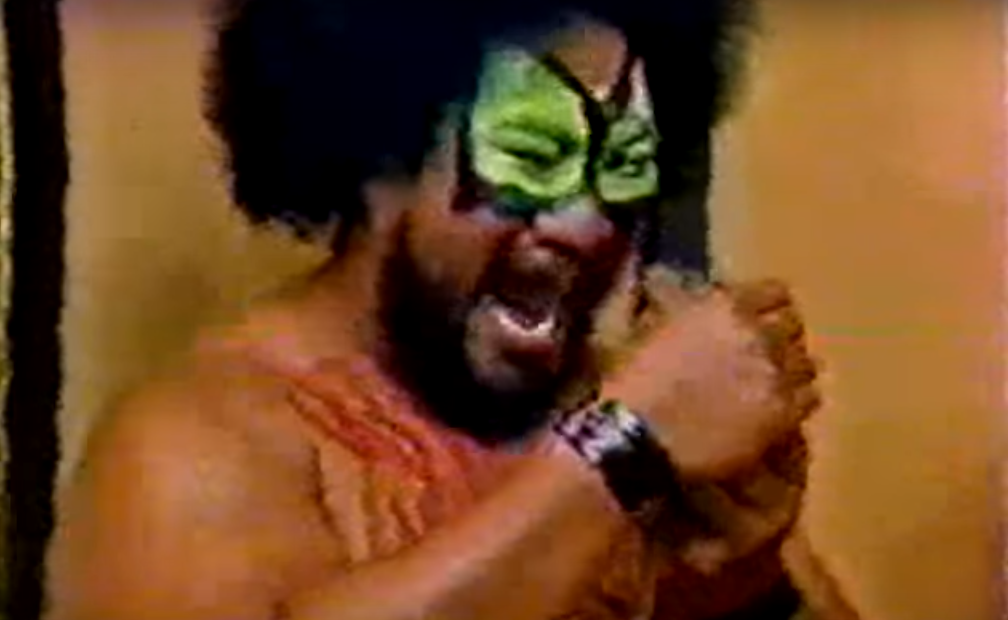 A furious Hayes called his buddy Terry Gordy into the territory to help extract revenge. Lawler for his part, asked Austin Idol to come back from the Continental area and be his partner in this battle.

Phil Hickerson fought with Terry Taylor over the International title, with both men scoring title wins as the month progressed. Hickerson also battled Jerry Lawler in single and tag team matches. Hickerson partnered with Bota and Tom Branch, with Lawler taking Jerry Jarrett and the walking oak tree “Big” John Harris on as his partners.

The ever popular Fabulous Ones fought the Kiwi Sheepherders (Jonathan Boyd and Rip Morgan) in a number of bloody brawls throughout the month.

World Class held its annual July 4th “Independence Day Star Wars” in front of 14,000 fans in Fort Worth.  Kerry and Kevin Von Erich fell to Chris Adams and Gino Hernandez in the main event. The heels would discover their Corvette smashed when they tried to leave the arena the night. The Von Erichs were the obvious suspects, but the story would play out to prove Bruiser Brody as the culprit. This marked his return after being away for almost two years.

Other action at “Star Wars” included Kerry Von Erich besting the One Man Gang in a “Chicago Death Match”, Sunshine downing Jim Cornette in a match where Corny was blindfolded and had one arm tied behind his back, and Kabuki getting the duke over Chris Adams.

With Mike Von Erich injured, his brothers Kevin and Kerry took Brian Adias as their partner in a six-man title match on July 7th against the Gang, Tim Brooks and Mark Lewin. The match is believed to be a “phantom” match, with Gary Hart booking a made-up result to give the heels the belts without the Von Erichs having to actually lose. It is believed that Kabuki won the Texas Brass Knux title this same month in another made up match.

For what it’s worth, Gary Hart would claim in his post-kayfabe years that WCCW was making 11- million dollars a year off of their TV deal with the Christian Broadcasting network. Seeing that number makes it almost unbelievable that the Von Erichs had to spend so many months working with the exact same heels over and over. The budget was surely there to make a bolder move.

July also saw “Hollywood” John Tatum make his WCCW debut. This is mostly notable due to who he was dating… His girlfriend Missy Hyatt would make her wrestling debut at his side a few months down the line.

With a boom ongoing in the wrestling world, the Sheik made an attempt to restart his promotion in Toronto. His press agents claimed that he was 43 years old – his actual age was 59. He had been out of the promoting business for the most part since December of 1981 when he lost his TV deal with Detroit. He also ran afoul of the NWA by working for an outlaw show at the Omni. I would assume that would have to be one of shows run by Jim Wilson and Thunderbolt Patterson.

With the WWA struggling, Dick the Bruiser took to trying to run shows at a nightclub called “Vogue”. The experiment did not last too long. The UWF in Japan found itself in financial peril after losing a sponsor that peddled fake gold. Apparently the Yakuza murdered a businessman involved in the situation, which was captured on camera.

A very unique match went down in Puerto Rico as NWA World champ Ric Flair partnered with former champ Dory Funk Jr. to tangle with bitter enemies Carlos Colon and Abdullah the Butcher. Predictably, the Butcher refused to tag into the match and left Colon to fend for himself.

When Continental failed to get the deal to be aired on ESPN, long time wrestler, referee, and promoter Ron West flew to Minneapolis and other cities and acquired TV time for Ron Fuller to attempt a national push for his promotion.

Hercules captured the Florida title from Hector Guerrero at the end of June. However, his reign was destined to be a short one as he and booker Wahoo McDaniel got into a fight in the locker room, leading to Hercules quitting the promotion.

This turn of events led to a surprising twist as young Jack Hart (aka Barry Horowitz) had endured 131 straight losses without a win.  Manager Percy Pringle III deemed he could make this man a star and took him on as a challenge to himself. Hart found his way into the tournament for the vacant Florida title.  There he would outlast Cocoa Samoa in the first round. He then found himself the benefactor of two draws, leading him straight to the finals. Once there, Hart stunned an exhausted Mike Graham to capture the gold! JCP loaned out Dusty Rhodes and Ric Flair to aide Florida in drawing some houses. Rhodes and Flair headlined a special outdoor stadium show in Tampa on July 9th with the AWA World tag team champion Road Warriors in as a special attraction. This seemingly star-studded event ending up drawing under 1,000 fans. I have to assume weather was a factor there, but I have not researched that hypothetical guess.

2,000 fans came to Miami on July 10th to see Flair battle Dusty, as well as Billy Jack Haynes tangling with Rick Rude. Wahoo and Flair battled in Orlando for the belt on July 14th. Then on July 24th, a combined show in Miami Beach saw Flair grapple with Wahoo in a rematch, plus Rhodes bested Tully Blanchard in a barbed-wire match, Magnum TA brawled with Abby the Butcher, Haynes downed Rude, and Jimmy Valiant rattled the Barbarian.

The WWF came to Miami and drew over 5,000 fans to see the U.S. Express knock heads with Nikolai Volkoff and the Iron Sheik.  Greg Valentine tangled with Animal Steele, and Mr. Wonderful downed “Big” John Studd.

Bill Watts ran an outdoor show at the Tulsa Stadium, drawing over 10,000 fans for a day of wrasslin’ along with a Jerry Reed concert. WrestleFest saw Watts team with Dick Murdoch and Jim Duggan to defend America against Kamala, Kareem Muhammad, and Skandor Akbar. NWA champ Ric Flair survived a title defense with Dusty Rhodes, and Jake Roberts fought Ted Dibiase. As you can tell from my review linked above, the show is a fun watch. The WWE Network recently added it to the “Hidden Gems” section. Flair made several more defenses across the territory, giving Rhodes, Wahoo McDaniel and Dick Murdoch their chance at glory.

The Snowman, who was given a rocket push right into a TV title run as the latest big, African-American to get the “JYD spot”, dropped the title to Dutch Mantel. He then vanished for almost a year from wrestling anywhere of note.

The North American champion, The Nightmare (a.k.a. the Masked Champion) left Eddie Gilbert’s employ and went with Oliver Humperdink. This would spark a Gilbert face turn…at least until “Hot Stuff’s” dark side won out again.

Tag champs Ted Dibiase and Dr. Death were being hounded by Jake the Snake and John Nord.

Mike Graham was brought in for a few TV shots. He ended up eating a fireball from Gen. Akbar. I saw this angle several years ago while watching a comp tape and I felt it was a savvy move by Bill Watts to “injure” his special guest wrestler. Graham could head home and be forgotten, as opposed to if a Mid-South roster member was hurt, he would then miss bookings in order to sell the angle. This gave Akbar more heat, with limited negatives on the back end.

The Rock and Roll Express made their JCP debut on July 9th, winning the NWA tag belts from Koloff and Khrushchev in their very first TV match.

Buzz Tyler quit the promotion on July 12th, leaving with the Mid-Atlantic title in order to use it as collateral for money he felt he was owed. Tyler would basically retire from the sport.

Baby Doll’s indentured slave role saw her join Dusty Rhodes at Nelson Royal’s ranch.  Doll was forced to clean the horse stalls. She then requested to ride one of the horses, at which point she made her escape. On paper that all sounds kind of sketchy in a 2019 world of social justice warriors.

Despite their competitive bouts that went down in other parts of the country, Flair and Rhodes remained allies (if not friends) in JCP as they teamed up against their common enemies in the Russians.

With Flair still serving as a tweener, Tully Blanchard remained the top heel, facing off with Magnum T.A. and Dusty Rhodes over the U.S. and T.V. titles.  Baby Doll showed up at one match with T.A. dressed as a police officer, using the disguise to hand Blanchard a foreign object he utilized to knock out Magnum and steal the title win. A war of words on TV between Ric Flair and JJ Dillon led to the Dorton Arena setting their all-time attendance record for the “Battle of the Nature Boys”. Dillon agreed to put up $25,000 to match Flair’s $25,000 in a winner take all NWA title match between Flair and his charge, Buddy Landel. Magnum TA fought Blanchard in a bout for the U.S. title, along with the Rock and Roll Express defending their newly won belts against Ivan and Nikita Koloff.

The Omni was once again a battle ground ara as the WWF and JCP competed for the fan’s money. JCP drew 13,000 fans on July 4th for a T.A. vs. Flair main event. Bill Watts made a very rare appearance outside of his own promotion as he partnered with Pez Whatley and Dick Slater in a loss to the Russians.  The WWF came in on July 14th with Paul Orndorff butting heads with Roddy Piper. In addition, Ricky Steamboat brawled with Don Muraco and George Steele partnered with the U.S. Express to face the Spoiler, Iron Sheik and Volkoff.  I almost have to assume the WWF booked a six-man match in response to JCP’s tag match. Plus both featured their respective company’s evil foreign heels as participants.  It all seems a little too convenient to not have been intentional.

Thanks for reading! Tons of reviews, along with more monthly breakdowns to come! Feedback, corrections and suggestions are welcome!