The WWF announced a partnership with a New York area distributor for a series of “pay-per-view” events.  The first event will be “The Wrestling Classic” in Chicago come November.  Harry Caray was rumored to be part of the broadcast team for that event.  Four other PPVs were planned to air by the end of the following summer, but the only one that came off was “Wrestlemania 2”.

The big angle of the month saw “Mean” Gene Okerlund announcing the “Manager of the Year” award (In September??!?!). Bobby Heenan convinced the other heel managers to give their votes to him, netting him 519,711 votes. Hillbilly Jim and Capt. Lou Albano then agreed to cobble their votes together, giving Albano over 600,000. An outraged Heenan then ordered “Big” John Studd and King Kong Bundy to attack Albano and Jim, smashing the trophy in the process. Uncle Elmer and Cousin Junior made the save. 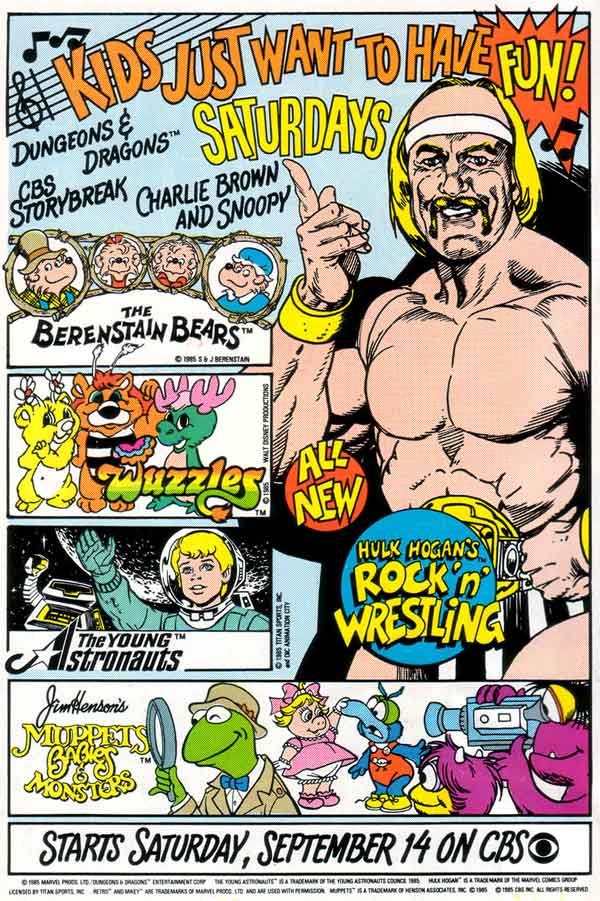 WWF champion Hulk Hogan was in need of knee surgery.  Plans were discussed for either Roddy Piper or Terry Funk to win the title on a temporary basis. Hogan ultimately declined to have the surgery, which is believed to be a factor in why his match quality dropped after this point in his career.

Barry Windham and Mike Rotundo were shown at an eye clinic as Windham tried to recover from Johnny V sticking a lit cigar in his eye socket the prior month enroute to the Dream Team stealing the World tag belts.

Andre the Giant spent the month in Japan, only coming back near the end of September to work shows in Chicago and New York.

Adrian Adonis was traded by manager Bobby Heenan for the Missing Link. Adonis started to carry a briefcase with him at this point in an angle spectators probably could not have imagined the blow off to.

Bruno Sammartino was reported to not be pleased with David Sammartino’s push, and was missing dates in protest.

Fun fact: The kids who were seen on WWF TV holding the LJN figures only had them long enough to get the shot, then the WWF agents would take the toys back.

“Classy” Freddie Blassie wrapped up his in ring career in a steel cage match against Capt. Lou Albano. Blassie was 67 years old.  Is it wrong that I hope there is a fan cam of this match?

JYD was shown working a jobber on TNT. During the match commentator Bruno Sammartino explained how headbutts actually toughen the skull. CTE was clearly not a concern yet.

The wacky “Fuji General” skit aired on TNT, with Don Muraco and Mr. Fuji portraying doctors on a soap opera.

Jim Powers quit the WWF. He headed to WCCW and was in line for a push there.  A vignette aired plugging his arrival, but then Powers quit abruptly and headed back to the WWF.  Supposedly, he did not even stop to pick up his paycheck before leaving.

Terry Garvin left his backstage gig in Central States for a similar role in the WWF. This is only notable for spawning years of gay jokes from “Lord” Alfred Hayes and Gorilla Monsoon on commentary regarding Garvin’s aggressive sexual nature.

In a match I hope makes it to the WWE Network’s “Hidden Gems” section, Mr. Wonderful teamed with Ricky Steamboat to face Terry Funk and Don Muraco as the “dark match” main event at a TV taping.

Cincinnati drew over 10,000 fans for a Hulk Hogan battle with Roddy Piper. Muraco and Steamboat’s feud continued on this night as well.

8,000 fans came for a lousy show in the Boston Garden where Hogan fended off the challenge of King Kong Bundy.

Montreal saw talent intermingle from the local roster and the WWF crew. King Tonga and Dino Bravo fought the Dream Team in the main event. The Rougeaus, fresh off the hottest feud of the summer, were paired against Mike Sharpe and Rene Goulet, Tony Atlas brawled with Joe LeDuc and Tito Santana defended his IC gold against Sailor White. The event drew 9,000 fans.

16,000 came to Pittsburgh to witness IC champ Santana defend against Randy Savage. Bruno Sammartino was the guest on a live “Piper’s Pit”, leading to a brawl between Sammartino and Piper.

16,000 fans in Los Angeles witnessed Hulk Hogan defend against “Big” John Studd in a match that was taped to be used as part of an “A-Team” episode.

MSG drew 18,000 fans as Andre the Giant squared off with King Kong Bundy. Terry Funk and the JYD brawled with one another in the co-feature. Former AWA World champ Otto Wanz was introduced to the crowd as the “European Champion.”

Almost 20,000 fans sold out the Philly Spectrum as Bruno Sammartino partnered with Mr. Wonderful to combat Roddy Piper and Bob Orton Jr. Hulk Hogan defended against “Macho Man” Randy Savage in their first ever match in the other featured match up.

Vince McMahon won another war as he successfully had the St. Louis promoters ousted from the Kiel Auditorium. With Harley Race, Verne Gagne and Bob Geigel hurting financially in the area, they could not afford to run the area’s larger arena, the Checkerdome, essentially ending the St. Louis Wrestling Club as a promotional entity. JCP planned on coming to the area and running the Checkerdome in order to get their foot in the door in what was once the heart of the NWA.

The WWF drew 3,100 fans to the Kiel to see Mr. Wonderful throw down with Roddy Piper. JYD knocked heads with Terry Funk and Steamboat hounded Don Muraco in the key undercard matches.

Thanks for reading! I’ll be back soon with all the news, notes and results for the rest of the major wrestling promotions in September 1985!  Feel free to follow me on Twitter at https://twitter.com/Brody1982