Where we left off: http://culturecrossfire.com/wrestling/wrasslin-back-day-april-1985-part-one/

Verne Gagne ended up piledriven on the cement by Saito and Bockwinkel, to keep the angle hot.

The WWF attempted to undercut the success of Verne’s big card by running the Met Center one day earlier. They drew 7,000 fans to see Hulk Hogan defend his WWF title against Jesse Ventura. “Mean” Gene Okerlund was seconding Hogan, and he ultimately interfered, causing Ventura to be counted out. Greg Valentine bested Tito Santana in a “lumberjack” match when Brutus Beefcake ran interference. The JYD beat Brutus Beefcake via disqualification. Wendi Richter also appeared in action.

The Road Warriors seem to make news every month for causing issues behind the scenes, and this month proved to be no exception. The Warriors penchant for not selling for their opponents came to a head when they were matched up with Jerry Blackwell and Larry Henning. The vets were not receptive to the Warriors’ style and delivered a few snug blows to make sure the Warriors figured out that selling would be in their best interest. There is/was a long standing urban legend about this incident, but supposedly the rumors are overblown.

Terry Gordy, Michael Hayes and Buddy Roberts joined the AWA. They were reportedly hoping the Road Warriors would have moved along before their arrival, but that was not to be. The Road Warriors’ title defenses were primarily against the Hennig Family.

Chicago fans saw the AWA and WWF compete for their cash as the groups fan on back to back nights.   The WWF offered up Andre the Giant facing Big John Studd and Ken Patera, which drew 2,700 fans. The AWA headlined with Verne Gagne competing with Sgt. Slaughter and Jerry Blackwell as partners against Sheik Adnan, King Tonga and the Masked Superstar. Da Crusher and Dick the Bruiser reunited to face Butch Reed and Larry Zbyszko, the Road Warriors battled the Hennig family, The Freebirds bested Greg Gagne, Jim Brunzell and the Tonga Kid, Mr. Saito and Nick Bockwinkel downed Tom Zenk and Brad Rheingans, and Baron Von Raschke partnered with Buck Zumhofe to batter Jimmy Garvin and Steve Regal.

Milwaukee fans were treated to the Road Warriors squaring off with Sgt. Slaughter and Jerry Blackwell. Paying customers in Green Bay saw Sarge, Blackwell and Da Crusher beat down the Masked Superstar, King Tonga and Adnan in cage.

Washington DC fans saw a headline bout between former WWF champ Bob Backlund facing AWA World champ Rick Martel. The event’s true drawing card though was the Road Warriors facing off with Ivan and Nikita Koloff. The Tonga Kid bested Zbyszko by DQ in the other match of note. 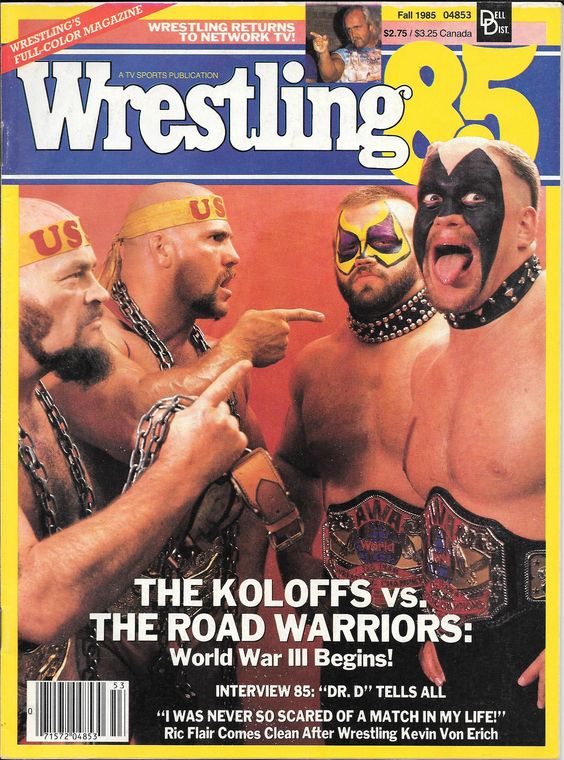 The following evening saw 10,000 fans come to the Meadowlands for a stacked card. Sgt. Slaughter facing Kamala in a Ugandan death match was the hardest pushed bout. AWA champion Rick Martel fought King Tonga, the Road Warriors battled the Hennig family, Jimmy Garvin bested the Baron, Bob Backlund out wrestled Zbyszko, “Hacksaw” Jim Duggan pounded Kendo Nagasaki, and the Freebirds tangled to a draw with the Tonga Kid, Jim Brunzell and Greg Gagne in a match that was taped to be part of the movie “Highlander”.

Local promoters in Montreal continued to benefit from partnering with Verne Gagne and the AWA as the Road Warriors drew 15,000 fans to the Montreal Forum for an AWA tag title defense against local megastar Dino Bravo and AWA World champ Rick Martel, who was himself a major star in the area. The Tonga Kid, Afa, Sika, Samu, (rookie) Rick Steiner and the Rougeau Brothers all took part in action on the card. 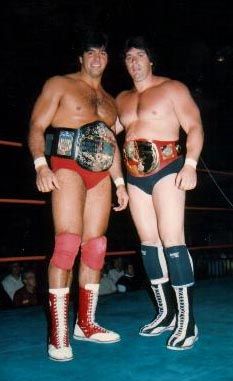 Bruiser Brody was already giving Antonio Inoki headaches over not wanting to put him over in their first big match on April 18th. They ended up settling on a double count-out finish.

On top of that, Giant Baba was claiming Brody was still under a valid contract to him for the remainder of 1985. Brody further angered Baba by not selling for Riki Choshu in one of Brody’s last matches in All-Japan. Brody was reported to have said Choshu was “too small”.

Keiichi Yamada fell to Shunji Kosugi in the finals of the first ever New Japan “Young Lion Cup” tournament. Yamada would go on to have a Hall of Fame caliber career as Jushin “Thunder” Liger.

With the Road Warriors capturing so much press upon their arrival to Japan in March, Inoki attempted to counter by having “Dr. D” David Schultz slap a popular Japanese TV announcer. The stunt failed to garner the type of attention that slapping John Stossel had earned Schultz in the USA a few months earlier.

NWA World champion Ric Flair battled Riki Choshu and Jumbo Tsruruta in title defenses while on tour of the island. He also partnered with his former enemy Dick Slater to down Higo Hamaguchi and Masanobu Kurisu.

Pro Wrestling Illustrated released the first ever Pro Wrestling VHS tape, called “Lord of the Ring”. It is hosted by Gordon Solie and Bill Apter and includes highlights and clips from Starrcade ’83 and ’84, plus action from Memphis, WCCW, Japan and other places.

Veteran Miguel Perez Sr. was attacked by Eric Embry at a Puerto Rican show while he was at ringside serving as a scout for his son. Miguel Perez Jr. ran to ringside to save his father, and challenged Embry to a match on the spot, marking his impromptu professional debut.

Ric Flair took his NWA World title on a tour thru Portland, defending against Curt Hennig, Bobby Jaggers, Karl Steiner and Billy Jack Haynes. Flair’s match against Jaggers in Seattle only drew 843 fans. With numbers like that, it comes as little surprise that rumors were spreading that Don Owens intended to shut down Portland’s promotion soon.

I’ll be back soon with the news and notes from JCP, Memphis, Florida, World Class and Mid-South. Thanks for reading!