Lord of The Curry said:
Big Brown is entertaining on Rogan's podcast just because I truly believe that he's one of those guys that will lie through their teeth at any moment. He says ridiculous shit all the time.
Click to expand...

And the lying thing sound about right. So many times Joe will go in on a story and Schaub seems to usually convienently have a story to go along with it. Happens so often that it feels like storytelling.

I tried listening to his and Callen’s podcast a couple times and found it torture. I just don’t like either of them. Only one I was able to get through was when Joe was on telling him he needs to retire.

TJ Miller is coming to town this weekend. Class.
S

always thought he was a pretty funny guy

Whitney Cummings and David Koechner are coming through. Eh.

I fucking missed Shawn Wayans a few weeks back. I was curious what the Ringo of the group did live.

this is surreal to me

I say that as a guy going to an open mic night tomorrow.

Jesus, is standup comedy that bad these days? I guess his bro fuckboy style has an audience, but that looks worse than the shitty comedians from 15 years ago that everyone made fun of like Dane Cook and Carlos Mencia.

The trailer for the netflix Jeselnik special has a lot of the same jokes he told last year on his tour. I wonder if it's 1:1 the same set.

Saints_Fan_H said:
The trailer for the netflix Jeselnik special has a lot of the same jokes he told last year on his tour. I wonder if it's 1:1 the same set.
Click to expand...

Likely is. One of Chappelle's Netflix specials was pretty close to the set I had seen him do live not extremely long before. 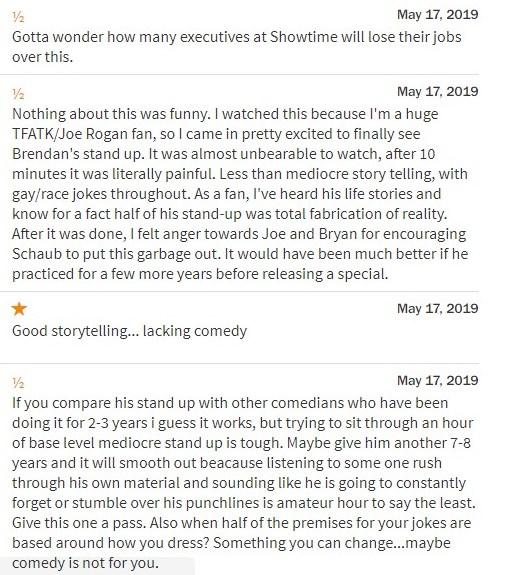 A legend is born

i guess fuckbois don't post online reviews, hopefully for showtime they make up a big enough market demographic.
B

Saw Eddie Izzard live for the first time in Boston the other night, good stuff

I tried to make myself watch 5 minutes of Schaub. I made it about 3. It’s as brutally bad as you’d expect it to be. I’ve always felt embarrassed for Joe when he goes on and on about how funny the guy is. I guess he feels that way, but I don’t think Joe is a good stand up either. Although I find Joe funny just talking.

Had to watch the Schaub special as I didn't get why so many people seem to be legit angry about it. I know stand up is supposed to embellish certain aspects of viewpoints and stories for humor to come into play but I have never seen what happens during a performance when someone has a severe case of NPD, a mild panic attack midway into his longest bit as it's probably hitting him no one has ever dedicated 10 minutes to fantasizing what it would be like to see Hulk Hogan in his prime bust a nut, and a complete disregard/disrespect for the facts of his own life as he puts all the blame for his failures in life on his father in attendance.

Positives
+For a guy whose pronunciation of words and tics in his speech is all over the place due to CTE his ability at impersonating other people is kind of amazing and an unexpected surprise with how terrible he is at stand up.
+Decent at dumb big goofy physical comedy. Could probably be used best as buffoon who falls through stuff in bad sitcoms after doing a Waterboy impersonation.

Negatives
-Everything else.
-Oh god an hour I'll never get back in my life

I'm also remembering 10 to 13 years ago back when I was actually trying to get into stand up and there were a lot of meathead influenced jokes about be careful which one of your friends gets too drunk because the fag in em would come out... I think these were ripoffs of some Dane Cook bit? Anyways seeing how there's not one mention of an actual woman until 58 minutes in, how there are so many random mentions of sucking dick that have no comedic purpose, and the way he breaks down men's bodies in such weird details... I never expected to see this person living and breathing in the flesh in Schaub the comedian.

Now I'm just left wondering if I even put in a half assed effort into this and kept in better contact with the friends I made around that time period if I could also be in a sweet spot as one of the current faces killing comedy.

schaub is an inspiration to incompetent dreamers everywhere

He would be better off as a fuckboy Gallagher.

I did adequately at more or less an empty open mic. I made the pretty girl hosting laugh, and that's what really matters.

Fan of Sports with Integrity said:
schaub is an inspiration to incompetent dreamers everywhere
Click to expand...

Who also happen to be friends with Joe Rogan. Otherwise this shit doesn’t get five minutes.

He doesn't know who Ice T is.

man he's like our age, how can you not know who Ice T is?

Now he’s a regular at the Comedy Store in Los Angeles, where he gets $6,000 for a set, and he books gigs on the weekends all over the country for much larger sums of money than that — anywhere from $25,000-$40,000. He had his own comedy special air on Showtime back in May called, “You’d Be Surprised,” which is significant. Most comedians never get a comedy special, and if they do it’s after years and years of toil. It registered as one of the top comedy specials in Showtime’s history.
Click to expand...

The one name that comes up time and again is of a guy who is performing with Dave Chappelle for the first time on the other side of the country: Joe Rogan. In a world where the monoculture has been blown to smithereens by a million YouTube channels and podcasts, “He is the closest thing we have to a Johnny Carson of our day,” Dorfman says. “The one guy that can launch your career if you get on his show and kill it.” Rogan is never far from the conversation with Schaub. And if Rogan were there, he would be just another one of the guys, perhaps deifying “Coco” Diaz or somebody else. Instead, Rogan’s halo shines brightest in his absence, because legends are always elsewhere.
Click to expand...

A week ago, a man had a heart attack while he was performing at the Comedy Store. That made for an uncomfortable show. “I knew I was killing it, but didn’t know I was killing it quite that much,” he jokes. At a gig in Tampa, a female comedian who’d been doing comedy a long time was roundly booed during her opening set for Schaub, and told the ingrates in the crowd, “Fuck you. I’ve been doing this for nine years, and Schaub just started a couple of years ago.”

The resentment that some veteran comedians feel for a guy who shoots onto the scene and succeeds — and not just succeeds, but steals away with adulation, sacks of money, Showtime specials — is real. Schaub isn’t on the level of the Rogans of the world or the Sebastian Maniscalcos or the Bill Burrs. “I’m just a pup,” he says. But for only being three years into his career? He is ahead of just about any comedian working.

“I was naive when I first took the stage, but it was the right kind of naive,” he says. “I knew deep down, like this was going to be something. I knew, like, ‘All right, this might be rocky, but it’s rocky for everyone.’ And then Louis C.K.’s like, ‘Yo, you got to bomb a thousand times or 10,000 times to become a comic.’ That’s not been my path, man.”
Click to expand...

"August 30th and 31st, From Pixels and Benchwarmers: Nick Swardson!"

Dude the club has to be fucking with him when that's on the sign. Bucky Larson doesn't get respect.

More about the icky side of Stand Up. Some of these stories and "bits" are just blatantly not funny. I'd rather go to a Gathering Of Juggalos than Skanfest all day any day.

I feel like I'm buying more tickets to stand up shows than ever. Saw Marc Maron a few weeks ago. Just bought tickets to see Roy Wood Jr next month at a little theater in Portsmouth, NH of all places next month (at 5 PM on a Sunday, of all times...). Also have Nate Bargatze, Lewis Black, and Jim Gaffigan coming up in the Spring.

If Maron comes back, I'm obligated to go. Missed him last time, gave my front row seat to a friend, and they walked out halfway through.

If I'd known about it in December, I'd have gotten tickets for Stormy Daniels' show. All gone by the time I heard about it, and I feel un-American.

Louis CK just released his comeback special on his website. Inviting a bunch of hacks to make "Of course, he would wait until we were trapped in our houses to release this special!" jokes.

At least, he's releasing it on his website and not foisting his big bald ginger face on unsuspecting Netflix viewers.


Bernie Bro Kamala said:
I feel like I'm buying more tickets to stand up shows than ever. Saw Marc Maron a few weeks ago. Just bought tickets to see Roy Wood Jr next month at a little theater in Portsmouth, NH of all places next month (at 5 PM on a Sunday, of all times...). Also have Nate Bargatze, Lewis Black, and Jim Gaffigan coming up in the Spring.
Click to expand...

And all of these shows are postponed. Except Gaffigan since that isn't until of May but at this rate, have to assume that'll get postponed too.

UCB is closing rest of their theaters in New York City.

https://twitter.com/mikerecine/status/1252712240916160517
As notoriously shitty as they were to stand ups, I did see several stand up shows there when I was a college senior contemplating my future. Plus Derrick Comedy in front of maybe 30 people during a high school trip to NYC with my dad and brother. That's my one big "I saw them when..." story.
You must log in or register to reply here.
Share:
Facebook Twitter Reddit Pinterest Tumblr WhatsApp Email Share Link
Top