The recent release of the film “Battle of the Sexes” about the farcical challenge between the bloviating male chauvinist Bobby Riggs and his opponent, feminist tennis champion Billie Jean King reminded me of another athletic event that was more spectacle than sport, 1985’s “I Challenge You!” – a multi-sport competition between Jim Brown and Franco Harris.

At the time, the NFL’s standard-bearer for running back greatness was Jim Brown. In 1965, he walked away from the game while still in his prime. At 29 years old, he choose to pass on the Cleveland Browns’ offer of $75,000 to return for another season and instead went to Hollywood to chase his acting ambitions. He retired as the NFL’s all-time leader rusher with 12,312 yards. He averaged an eye popping 104.3 yards per game, earning 5.2 yards per carry, while playing in 118 straight games. 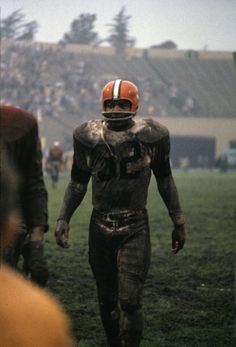 Brown was a leader on his team, spearheading a team revolt that forced Browns owner Art Modell to dump the Browns founder and head coach, Paul Brown, after the team went 7-6-1 in 1962. Paul Brown had a history of guiding his team to championship games, but the players demanded change. The new coach, Blanton Collier, led the Browns to the NFL title game in 1964, where they bested the favored Baltimore Colts. The following year Brown’s rushing prowess helped carry the Browns back into the title game. However, Vince Lombardi’s Green Bay Packers held Brown to a mere 50 yards on 12 carries in route to claiming the NFL title for themselves.

Brown did not show signs of a man breaking down as he had 1,544 yards in 1965, his second highest single season effort. Upon retiring he was quoted as saying ”I leave without regret,” ”Football is not my entire life. It was a good past, but only a past. I want to move on and grow. You always want to choose your own exit and not be eased out. I have pride. It gives a man a great feeling of satisfaction to be able to go out while he’s still on top.” His retirement saw him placed in the college football Hall of Fame, the NFL Hall of Fame, and the Lacrosse Hall of Fame. Brown was a star lacrosse player in college, even suggesting to reporters and friends that he was better at that endeavor than the gridiron 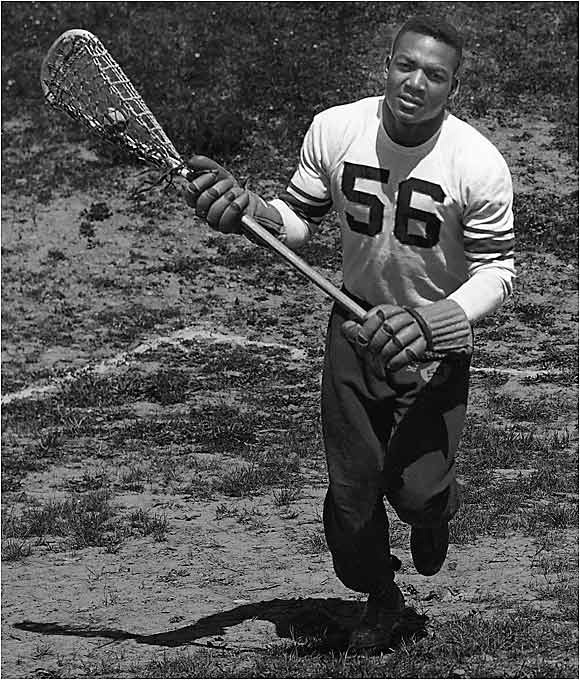 Then in 1983 Brown once again stepped into the NFL spotlight. Franco Harris, a running back who enjoyed massive success as the offensive motor behind the Pittsburgh Steelers’ four Super Bowl victories, was threatening Brown’s all-time rushing mark. Harris, at 32 years old, had just finished his 8th season with over 1,000 yards of rushing. He was now sitting at 11,950 career-rushing yards. Brown did not hide the fact that he was unhappy with Harris’ meek running style stating “I represented a certain amount of purity when I played,” “I went for the extra yard. I took the chances. That has a lot to do with who I am, and I’m not going to respect anything less. They say it’s smart to run out of bounds. I don’t care; I’m not going to respect it. When you accept this game, you accept a certain amount of violence. The nature of the game is hitting. If you can only do it for two years, then do it for two years and get out. Otherwise, you’re taking away from the game.” Brown stated elsewhere that “He (Harris) can break the record at his convenience because he has the cooperation of his organization.” “That’s not a feat by my standards. It has nothing to do with overall performance. It has to do with specialized circumstances to break a record. You want to give me those circumstances, I’ll come back and break any record they set.” Harris, for his part, did not play into the media’s desire for a controversy, simply declining comment on the situation.

The chatter about a comeback and records went against what Brown proclaimed in 1974 when O.J. Simpson was on the verge of beating Brown’s single season rushing record: ”Only broken-down ballplayers talk about people breaking their records.” Prior to his retirement Brown also stated that he hoped he could walk away before someone had to tell him he was finished.

Brown was not just speaking audaciously, and actually began the process of un-retiring. The team that held his rights, the Browns, was not his intended home though. The Los Angeles Raiders, heading towards a Super Bowl win that season, was the ideal landing spot for Brown. He admired Raiders’ owner Al Davis for assembling a team of bad asses and mavericks and turning them into contenders. Their hard image appealed to Brown’s inner sense of football being for tough guys. He was quoted at the time as stating: “The Raiders are really America’s team,” “Dallas could never be America’s team. Dallas is like Middle America, like apple pie. America proclaims itself to be like that, but in essence America was built just like the Raiders—with a bunch of guys who came from all walks of life, mostly low life, and who pulled together and conquered this land. That’s the true America.” The Browns’ Art Modell took the talk of a return in stride, joking with the media that the Browns could save money on equipment because they had Brown’s original chin strap and helmet on display. Al Davis spoke of his respect for Brown, and said the Raiders would be open to entertaining his attempt at a comeback, but first they would focus on finishing the season at hand. Modell flatly stated that the Browns would not trade Brown or release his contractual rights. Brown used this as ammunition to bolster his own legend by saying “The chances are, they won’t let me play,” “They don’t want me to show up the present day crop. But if I can accept an awesome challenge like this, why shouldn’t they let me play?” 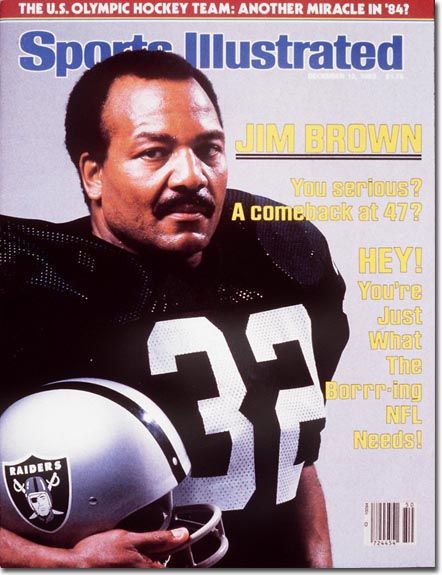 Brown continued to tease a comeback, even as the 1984 season approached. ”I have the greatest respect for Franco Harris, but he is just hanging around to try to break my record,” ”Even if Franco breaks my record by 500 yards, I will come back.” Harris meanwhile created a new wrinkle in the story by asking the Steelers for a pay raise, and then holding out during training camp. The Steelers had little interest in overpaying for an aging running back whose yards per carry was in decline and so they released him. The Seattle Seahawks picked up Harris, but his glory days were over. He mustered only 170 yards in the first 8 games of the season, then chose to retire mid-season despite being less than 200 yards shy of Brown’s rushing mark. That same year on October 7th, Walter Payton of the Chicago Bears surpassed Brown’s record. Brown approved of Payton’s hard running style and was very gracious about Payton besting his mark.

Promoters were still attracted to the allure of somehow capitalizing on the perceived feud between Jim Brown and Franco Harris. This led to a unique event being put on Super Bowl weekend of 1985, where Harris and Brown would compete in four sporting events to determine who was the better man. Around 1,500 high priced tickets were sold to the event, which also aired in syndication on over 140 stations across the United States.

The events started with a best of three series in racquetball, which Brown won in two straight games. This was followed by a trio of one-on-one basketball games, which Brown won in game three by overcoming a six point deficit to win 22-20. New York Giants quarterback Phil Simms was brought in to aide in a touchdown catching event, which Harris walked away with the duke in. The culmination of the challenges was a 40-yard dash race, with the winner being declared the overall champion, regardless of how the other events had panned out. Harris clocked in at 5.16, with Brown bringing up the rear with 5.72 seconds. Brown grabbed his hamstring as he crossed the finish line, but refused to use any possible injury as an excuse for losing the race. Brown did admit that he hurt his leg during the pass catching competition.

Harris won a car and a camper with his victories, meanwhile Brown was the recipient of a mink coat, a vacation on a luxury cruiser in Hawaii and $15,000 for the wins he accumulated.

Brown now sits in 10th place on the all-time rushing leaders list. That has not in anyway diminished his accomplishments in the past. Emmitt Smith is firmly on top with over 18,000 career rushing yards.  With the modern era of the NFL de-emphasizing the running game, Smith will probably never have to worry about the current crop of rushers impeding on his record. Frank Gore is the closest active player to Smith’s yardage, and he’s a mountainous 5,000 yards short of that mark. The 34-year old Gore has less than 500 yards on the ground this year for the Colts.