Bischoff plugs the WCW hotline by promising RAW results if you call in. Luger will leave WCW if he doesn’t beat Savage.  They lock up and neither man budges.  They remain locked up as they fall to the floor and we go to commercial. Luger pounds Savage on the floor and press slams him back in the ring. They battle over a backslide and Lex uses the ropes to block Savage’s takedown. Luger and Savage they collide on a shoulder block and both men are laid out.  Savage is caught coming off the top, but still manages to send Luger to the cement.  Savage nails the double axehandle on the floor and Lex posts him in retaliation. Ref is bumped back in the ring and Savage nails the big elbow. The Giant comes down and choke slams Macho Man. Luger wobbles to his feet and struggles to pick Savage up for the “torture rack”.  The ref stops the match since Savage is unconscious. You have to give Luger credit for selling big for Hogan, The Giant and Savage so far. Tweener Lex is a great angle.

This Saturday Night at 6:05 Hacksaw Jim Duggan vs. Big Bubba, and Arn Anderson and Brian Pillman vs. Bunkhouse Buck and Dick Slater.

Disco Inferno dances first to annoy the announcers and the crowd.  Eddy has the music later used for Juventud Gurrerra. They show clips of Eddy Guerrero beating Jushin Liger last night (on the “C” Show!) to earn a match on Nitro. They work a fantastic back and forth hold/counter hold fast paced match so of course the announcers talk about Hulk Hogan instead, and then they CUT AWAY FROM THE MATCH so Hogan can cut a promo on The Giant in the parking lot! Jesus.  Eddy hits a flying crossbody on Dean from the top rope to the floor. Eddy tries the frog splash but eats knees. Dean tries to take down Eddy but Guerrero reverses him into a roll up for the pin.  Dean wants a rematch and they shake hands.  Excellent little match.

Hulk Hogan promo.  He promised a sick kid he’d kick the Giant’s butt.  Hogan randomly leaves the ring and makes his way around the ring slapping hands with the fans.  An “old lady” blinds Hogan with powder and The Zodiac and The Giant come down as the lady reveals herself to be Kevin Sullivan and beats Hogan with his cane. The Giant rips off Hogan’s neck brace and “snaps his neck” again.  The American Males run out and the Giant mauls them.  The Nasty Boyz next run out and they too are beat down.  Sullivan shaves Hogan’s mustache and hands Zodiac the scissors and then Zodiac…does nothing.  Eventually the heels walk off. Another good angle to put The Giant over.

They go back and forth until Flair tricks Arn into charging him, which Flair ducks away from and sends Anderson crashing to the floor. Arn backdrops Flair on the floor and nails a big spinebuster back in the ring. Flair rebounds and gets the Figure Four but Arn quickly gets to the ropes.  Arn attempts a piledriver on the cement but Flair backdrops him instead.  Arn attempts a DDT but Flair hangs onto the ropes. Arn is trapped in another Figure Four and Arn submits – but Pillman pounces on Flair right after and he and Arn lay a beating onto Flair.  Flair demands a cage match for next weeks and gets his wish. Nice match full of countering your best friend/training partner’s moves.

We see clips of the previous Kid/Razor matches from 93 and from more recently. Vince blames The Kid for costing Razor a match with Dean Douglas from a few weeks ago, even though the replay from In Your House clearly shows Bob Backlund holding the ref which cost Razor more than The Kid making a silly 3 count on Douglas.  Razor tossing The Kid viciously in response should really position Razor as the heel here. Lawler claims The Kid was seen talking to Ted DiBiase. Hmmmm.

They trade blows, again with Razor using power and The Kid using speed to their advantage. Dean Douglas wanders down after Razor chucks the Kid to the floor. Back in they continue to go back and forth and suddenly a clothesline finishes the Kid out of nowhere. Huh.

Vince declares the feud over and says clearly Razor respects The Kid more now.  The Kid gets in Razor’s face and slaps him. Razor beats the crap out of The Kid and even puts him in the abdominal stretch and yanks his hair.  What a bully. For some reason the ref is treating this like a new match has started. Razor takes him down, pulls his hair again and slaps the back of his head a bunch.  The Kid barely is able to stand long enough to slap Razor again and Vince acts like The Kid is being a bitch by slapping Razor.  This dynamic is bizarre. They go to commercial come back to show us Razor power bombing and pinning the Kid AGAIN. But the match is still going and The Kid can barely stand and Razor is mocking him with pitter patter slaps. Razor back drops him off the top rope. Razor teases a “Razor’s Edge” but just small packages The Kid instead for another pin.  Then he smack talks The Kid while slapping his face some more.  The Kid is still somehow supposed to be in the wrong here…Kid shakes Razor’s hand and dupes him into a roll up for a 2 count.  Razor and Kid start to smile at each other and the crowd chants for a “Razor’s Edge”.  They half hug instead.  Interesting “squash” match, odd angle development.

They run a WWF hotline plug for a special vote: “Will OJ be found Guilty or Not Guilty?” Proceeds will go to charity at least. 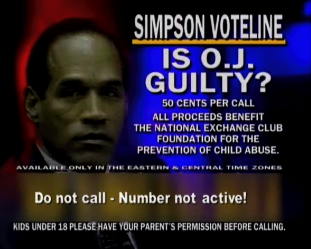 Fun little back and forth match here.HHH is undefeated and Horowitz is enjoying a mini-push.  Vince mentions that last week’s RAW set an all time ratings mark.  Monday Night Wars pushing interest? Barry gets a few near falls but eats a Pedigree for a pin.  Probably could have let Horowitz keep his momentum by beating somebody, this doesn’t do much for anyone.  Plus Hakushi is now being paired with Horowitz, sinking another entertaining worker down to mid card purgatory.

This is…random.  Vince and Jerry even acknowledge that they are USWA Tag Champs.  They rap poorly over MOM’s old theme. I seem to recall PG 13 winning some tournament or match in USWA to earn a RAW match, but I could be totally off. Somebody clue me in? JC Ice hits a nifty drop kick and break dances. They hit a sloppy “Hart Attack” double team move on Rogers.  Vince is probably wondering why he let these 2 little guys get TV time. Vince can’t tell PG –13 apart and is unsure of what their tag team name is. Oh boy. Way to put them over Vince. The jobbers kick out of some big moves, but Wolfie D uses a tilt-a-whirl suplex on his partner and slams JC Ice down on the jobber for the pin.  Waste of time since Vince kind of shit on them.  Amusing commentary in that regards.  Spoiler alert! I peeked ahead and see this led to PG-13 getting a tag title shot on RAW.

They announce Bret is the number one contender to the WWF title, apparently regardless of the outcome of this match.  We see clips of Bret losing to The Bulldog at Summerslam ’92. Probably to tease that Davey Boy Smith will beat Diesel for the title at the next PPV and then Bulldog/Bret 2 can happen.  Big slugfest to start and they brawl to the floor, where Bret slams JPL onto the metal steps in a painful looking spot. Bret is beat down extensively as Lawler rips into Bret on commentary. JPL misses a flying legdrop from the top rope (much like their PPV match where Bret’s shine segments came from JPL missing big moves.) Bret doesn’t get much offense in before JPL gives him another lengthy pummeling culminating with an attempted top rope cannonball that Bret blocks and he superplexes JPL off the top rope to a BIG pop!  A Sharpshooter finishes.  Lawler is aghast and takes his jacket off while screaming at Bret.  Hart pounds on Lawler for good measure until Isaac Yankem attacks him and DDT’s Bret on the floor.  After a commercial break Vince announces Bret will face Yankem in a cage match on RAW “in a few weeks”.

Oh and in case you were wondering: 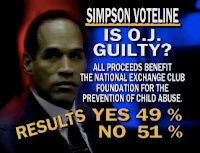 RAW competed favorably with Nitro this week, although if you’re a casual wrestling fan Arn vs. Flair will win out over Bret vs. a pirate. HHH and Horowitz were on opposite Savage vs. Luger and nobody cared about PG-13 when Eddy and Dean were having a fine match on the other channel.
Both fun shows, but Nitro brought the star power. WWF is presenting much better cards than I remember/expected though.