We open with a fantastic little intro from Gordon Solie where we see some highlights of the show as Solie opines that men came by foot, through the air and on “chariots of steel” to arrive in front of 32,000 fans for battle.

Bill Apter is the co-host of the video for match wrap arounds. Tony Schiavone calls the action solo.

In a wonderful touch, we get a quick highlight of why these men are feuding. Bass and Landel were both under J.J. Dillon’s employ before jealousy took over and Bass went solo.

These matches will all be clipped as this VHS was only an hour long. We see Landel beating on Bass in and out of the ring, with Dillon aiding when needed. Bass rallies and tries to give the “Nature Boy” CTE by slamming his fists into Landel’s skull. The time limit seems to expire as the men trade punches. Bass goes for some bonus points by attacking Dillon. Landel attempts to save his manager, but the heels knock together. Dillon splays himself on the mat and squirms like a good buffoon. Bass locks on the claw and makes J.J. suffer for a bit before Landel can retrieve him for a retreat.

This one has been brewing for several months as Ole and Sawyer were unlikely babyface allies in March on Georgia TV before Ole once again turned to the dark side on an early edition of JCP’s 6:05 wrasslin’ on TBS.

Slater and Sawyer are both wild men, so I’m intrigued by this clash! The faces charge the ring, unloading on the heels. Sawyer and Ole fight over one of the belts, until Slater jumps the prone Ole.

We see clips of a back and forth battle. The heels attempt to double up on Slater but he fights Arn long enough to escape his grasp, allowing him to and slam Ole from the top rope. That leads to the hot tag. All four men brawl, Sawyer gets the visual pin but the ref is distracted. Ole drops an elbow onto Sawyer’s spine and steals the win. This felt like it had the makings of a good fight had we seen it in long form.

After months of building up guys like Dusty Rhodes and Ric Flair as allies in his battles with Paul Jones, Jimmy Valiant’s friends list whittled down to some lower card geeks and the Ragin’ Bull on this super card.

Houston’s gangly frame and haircut makes him look very similar to how Shawn Michaels did in this time frame. With the exposure Michaels was getting as a lower card guy for Bill Watts, it’s surprising Verne Gagne was able to scoop him up for stardom before Dusty Rhodes could get him to Florida or maybe even JCP for seasoning as a next generation superstar.

The Ragin’ Bull gets a hot sequence of flying attacks on the Barbarian, as the cocaine supply is ample tonight! Tony repeats the Fernandez tall tale of serving in ‘Nam. We then clip to the heels getting heat on Houston. Houston bumps huge for Abby’s offensive attacks. Houston visibly leaps to the floor by himself as Abby tries to toss him from the ring. The undersized babyface is then whipped into the steel, taking a high speed bump before he flips up and over the railing and onto the grass!

All six-men suddenly brawl. In the confusion Houston small packages Graham for the upset(?) win. What we saw here was a lot of fun. Houston was trying hard to make the heels looks fierce.

We see some clips of the long long long feud between these men. Buzz Tyler is with Valiant and Abby is with Jones. This is a chain match, which Jones unwittingly signed up for. He attempts to hook Abby to the chain instead, but Buzz Tyler jumps in and straps Jones onto the chain.

We skip ahead to Valiant being battered with the chain, coming up bloody. Several clips are shown of Valiant battering Jones. Abby attempts a run in, but he and Jones collide, allowing Valiant to snag the pin. I can’t properly express how excited these fans are to see their hero conquer a manager.

Abby attacks Valiant after the match to ensure the fued can go on for another year.

Solie compares this match to a real life World War 3, with nuclear weapons being used. Koloff gets wrecked by both Hawk and Animal as they toss him around the ring at will. Kruschev scores with a cheap shot to put the Animal into duress.

Hawk gets the hot tag and explodes on both communists. Ivan shows a lot of confidence in the young meat heads as he allows himself to be set up for a top rope powerslam. Kruschev smacks Animal with a chair from behind, causing him to drop Koloff as both men crash to the mat. Hawk gets the chair and dispenses some justice on both men. The Russians come up bloody. The Warriors beat up the heels until they can finally retreat. The match is ruled a double-DQ.

This one had a big match feel, which is probably the most important thing. It is a bit surprising to see an outside team come in and lay waste to JCP’s villains. The Warriors would slowly make more and more appearances for JCP over the next several months before officially joining JCP in early 1986.

Kamala jumps Magnum at the bell and chops him to the mat. Magnum fires up and sends Kamala into retreat. We fast forward to Kamala chopping and choking at the champion. We get the armpit pinch of extreme discomfort. Magnum is bloody. Two splashes are not enough to finish T.A., but the crowd sounded worried.

T.A. makes a comeback, drawing in Gen. Skandor Akbar for the DQ. Kamala is slammed for a big pop. The Ugandan Giant then charges Magnum and is blasted with the belly to belly suplex. The crowd loves it!

Kamala was told by booker Dusty Rhodes that he would not have to lose if he came in for this special one-shot. He felt betrayed when JCP then ran the clip of Kamala taking the belly to belly over and over on JCP TV over the following months.

Solie and Apter are once again tremendous in their introductions here. Apter calls Niitka “The Russian ambassador of destruction.”  Solie then talks of the Russians desire for world domination. The Kremlin has ordered Nikita to win the world title as part of their plan for global domination. This is the super athlete of the Soviet Union vs. the best in the NWA. To drive home this point, they air clips of the Koloffs in a darkened room training by having Ivan wrap a chain around Nikita’s head, then making him crank his head forward as Ivan resists. It makes for a great visual!

As part of the build to this, Nikita sneak attacked David Crockett while he was pushing the Russians for answers over their recent heinous acts. The NWA was going to suspend the Russians over this, but Flair implored them to let him handle it in the ring.  This led to Crockett being named special referee for this bout.

Flair arrived in style via helicopter: 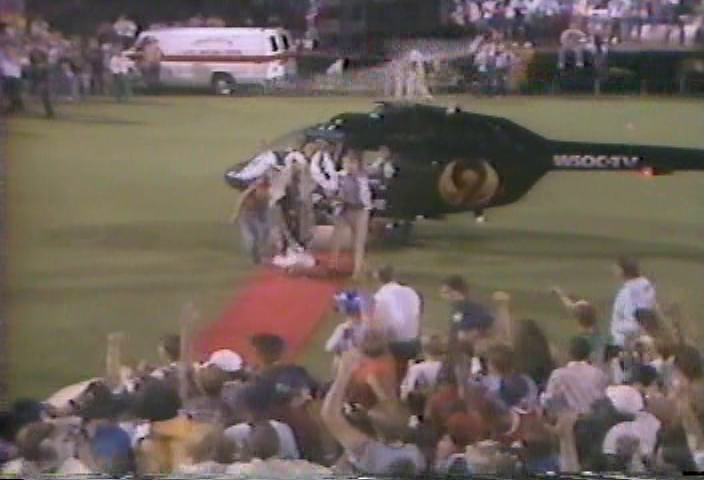 Nikita dominates early on with his pure power. Flair is resilient and is able to chop and suplex Nikita once the Russian’s endurance wains. Flair snags the figure-four. Koloff rips at Flair’s face to escape. Flair is chucked to the floor and slammed into the steel post. Back in the ring Nikita hits the bloody champion with the Russian sickle, but he is too exhausted to cover him fast enough to score the win.

Flair gets a second wind and tries to finish the monster off before Nikita can recover his own stamina. Nikita resists being finished, but Flair continues to pour on the assault. Nikita shoves the ref. Ivan Koloff runs in and hits David Crockett accidentally as he tries to get at Flair. Somehow this is not a DQ.

A FAN rushes the ring and tackles Ivan. Security pour in to tackle the kid. The match is still going on?!!? Flair tries a flying crossbody on Nikita from the top. Nikita trips over Ivan, who is still in the ring. Flair over shoots him and the men fall a bit awkwardly, with the spot having been blown all to hell. Flair does a half ass pin fall attempt to cover for the messy moment. I think that might have been the planned finish?

Flair delivers chops and elbows to rattle Nikita. Koloff attempts a slam but in his daze he tries this too close to the ropes, allowing Flair to grab on and shift his weight. He lands on Nikita and scores the pin!  Uncle Ivan pounces and the Russians maul Flair. The fans are ready to riot as the security rushes around to contain them!!!! The P.A. announcer begs the fans to stay in their seats.

Sam Houston and some other geeks run in, but the Russians wipe them all out. Flair is hit with a Russian sickle which sends him splatting to the ground outside the ring. HOLY COW! Heat! This was freaking awesome! Dusty Rhodes vs. TV champion Tully Blanchard – “Unsanctioned Lights out, steel cage match, with the winner getting the belt and Baby Doll”

We see clips of Tully “blinding” Dusty with a fireball. A “fan” comes in to aid Blanchard. It is Baby Doll with a black wig on. What was the point of the costume? She was the size of a bull moose and helped Blanchard instantly. It wasn’t exactly a mystery who was under the disguise.

The match is joined in progress with Dusty trying to wreck Blanchard’s knee. Rhodes is sent into the cage in a contrived looking spot as Rhodes’ was yanked by his shorts, and suddenly took flight. I think that broke the laws of inertia.

A bloody Rhodes returns the favor, blooding Blanchard as he grinds his face into the mesh. The ref is dismissed with a shove as he tries to regain order. Rhodes uses the figure-four to torture Blancard as he fights to get to the ropes.

The men fight on the top of the fence. Dusty drops Blanchard to the mat. He attempts a dive that misses the mark. Baby Doll climbs the cage to hand Blanchard a loaded elbow pad. Rhodes cuts the plan off by catching Blanchard with a piledriver, scoring the win, the title and the lady!

The match’s lights out stip meant that the match was not supposed to be sanctioned by the NWA, thus taking place after the event’s “lights went out”. In reality, it was more than likely Rhodes way to make sure he got to headline this big event.

The credits at the end made me pop twice. Once due to the now infamous “Klondike Bill” being listed as part of the crew, then once more when Apter and Solie are listed as being accommodated at a local motor lodge. I am picturing Solie getting blitzed on Crown Royal as Apter watches black and white reruns of the 3 Stooges.

Final thoughts: I’ve wanted to see this for the past 30 years or so, thanks to PWI having an ad for it in their magazines for what felt like several years. I read a few other reviews of this card that were not flattering, but I had an absolute blast for the hour it was on.