Jerry Lawler, Austin Idol and The Giant Hillbilly vs. the MOD Squad and J.D. Costello Joined in progress from the Mid-South Coliseum. Hillbilly is the farmer formerly known as Uncle Elmer. The heels are massively over matched talent wise.  All 3 of the baddies rough up Lawler. We skip to the MOD Squad being tied up in the ropes. Idol and Lawler chase down Costello.  They toss him to Elmer, who delivers a sloppy slam. I assume that is both due to the size difference and the lack of technique shown by Costello. Elmer drops a leg on the manager. Lawler piledrives him. Idol locks on the figure-four. The arena looked packed and the fans loved this.

An Austin Idol music video is shown. The original music is over dubbed with dramatic and royalty free audio.

Lance Russell interviews Danny Davis and Ken Wayne.  They are dressed in long blue capes, have multi-colored hair and large stars painted on their faces.  This combo is gloriously cheesy.

The Beach Boys vs. The Nightmares

The Nightmares are Davis and Wayne.  The Beach Boys are John Stewart and Van Van Horn.  Stewart would go on to be a pushed commodity in the AWA’s dying days on ESPN. The Beach Boys come down to “I Get Around”. Jeff Bezos owes Mike Love some royalties.

The Boys are wearing swim trunks for tights. The heels cheat repeatedly as the faces play clean and fight valiantly.  More cheating leads to any easy win for the heels in barely 3-minutes.  The action was basic since the Beach Bums were green as grass.

JIP with Jarrett wrenching on Tojo’s arm. Jarrett “dislocates” Tojo’s elbow. Jarrett refuses to stop beating on Yamamoto. Akio Sato and Tarzan Goto run in.  Jeff Jarrett and Pat Tanaka are hot on their tracks. A big man comes in dressed in all black. “The Ninja” attacks Jarrett. That prompts Lawler to run in and make the save as we cut away.  Who was that masked man?!?!?

Roberson looks a bit like Al Perez in size and facial hair. Rich works the arm. Dirty Rhodes, Don Bass, and Larry Right hit the ring and attack him. Russell explains that the heels were The Flame, Fire and The Inferno, as we saw in Volume 4 of this series. They were forced to unmask after losing to Lawler.

Rich is bloodied up. (SHOCKER) Promoter Eddie Marlin comes down to offer law and order. He’s also bleeding from some unseen angle. Rich is soaked in blood. The heels cut a promo at the desk as the job squad try and peel Rich’s carcass from the ring.

The heels demand to have their match start, so two jabronis show up. The match doesn’t have an on screen graphic, so their names may be wrong. The heels smash them in under 2 minutes.  The heel trio then get on the mic and demand more competition. Lawler and a bloody Rich show up and brawl all over the TV studio with the heels. Lawler reveals his shirt is torn and bloody, as the heels had attacked him off screen earlier. After the heels flee, Lawler gets on the mic and straight up tells the heels “We’re gonna KILL YOU!”

Joe LeDuc promo: He points at the Giant Hillbilly, who Lance Russell slips up and calls “Uncle Elmer”. LeDuc cuts a promo on Paul Diamond. He lists all the things that make Diamond talented and good looking and how it all means nothing to him. LeDuc wants Diamond to be a MAN and work a lumberjack strap match against him. Crazy and awesome interview from LeDuc. I LOVE HIM.

LeDuc says no tags needed, he’ll beat them both at once. He charges the jabronis, laying chops into their chests. He tosses one to the floor, then continues hacking both men to the mat with ease. LeDuc piles the men on one another and wins with hardly a broken sweat.

Diamond hits the ring and assaults LeDuc with a weapon. The MOD Squad run in and all three men batter Diamond. Jeff Jarrett and the geek patrol charge in to save Diamond.

A bloody LeDuc declares that Diamond is not yet a man and that he will prove it. Awesome stuff all around here.

A babyface Buddy Landel cuts a promo on Bill Dundee. He has a good line about Dundee complaining about Landel’s recent actions. “Dundee, I am the one who should be complaining since your teeth weren’t on my fist after last week.”

Russell admits an error and Rutledge is replaced by David Johnson. Why would poor Murphy want another ass kicking from this wild man? LeDuc smacks around both men, casually kicking, kneeing and tossing around the twerps. LeDuc stacks the men like cordwood and pins them in under 2 minutes. Give this man all the titles in the world!

LeDuc joins Russell to remind us that Diamond is NOT A MAN. He grunts and promises pain. LeDuc declares he is already scarred, so what can Diamond do to him. As LeDuc is ranting Diamond walks behind him. When LeDuc turns around, he eats a superkick. Diamond says “You wanted to be my mentor?. Well I learned how to attack people from behind from you!” LeDuc tries to speak up can only groan.

Paul Diamond and Mr. Liberty vs. The Dirty Black Boys

Mr. Liberty is debuting. The “Dirty Black Boys” are indeed two African-Americans in masks. How progressive. Apparently Liberty only lasted 2 or 3 weeks here. The announcers put Liberty over as a rock solid, but unspectacular wrestler. I had to ask around the internet wrestling world for the identity of Mr. Liberty, and apparently he was just a local jabroni named Joe Stark. His push may or may not have ended when he accidentally hit a fan with a chair at a house show. The faces out grapple the heels for several minutes until Joe LeDuc and the MOD Squad run in and batter our heroes. LeDuc has a crazed look as he strangles Diamond with a strap. A bevy of jabronis run in and clear the ring. I want to see this strap match now!

Bigelow is wrestling in shorts and a muscle tee. Jamison is shown looking terrified at ringside to have to work with this bull. Special rules here state Bigelow must start the match on all-fours for the first minute. Jamison tries a headlock and chinlock. Bigelow no sells all this. At the one minute mark Bigelow hits a slam and wins. That’s an effective MONSTER heel.

The fans go nutty for the faces. The King toys with the heels, dominating the opening minutes with ease. Winston has the gall to punch Lawler, so the King storms at him and pops him. Winston flies for the blow. Elmer tags in and drops some legs on his much smaller foes. Lawler is back in quickly.

The heels try to double up on Lawler, so he waves Elmer in to help. As the ref tries to break up the four-way brawl, Bam Bam Bigelow runs in and blasts Lawler with a clothesline. Winston steals the win off that.

Bigelow did good business with Lawler, leading to him having several runs with Bigelow off and on as Bigelow traveled between the WWF, NWA, Japan and other places over the next few years.

Fire and Flame are shown spray painting Eddie Marlin’s Lincoln town car. Marlin comes to the parking lot and gives chase to manager Billy Spires. Lawler holds him back. Jeff Jarrett, Tanaka, Elmer and other faces come out to survey the damage. As silly as Memphis could be at times, they make angles like this feel very real. 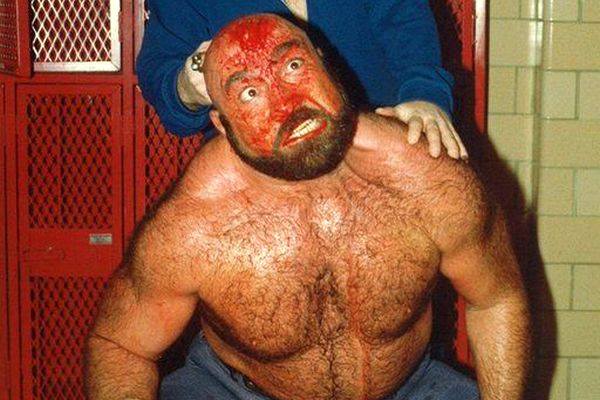