Here we have a Christmas classic about a 7 year old boy left all alone as his family mad dashes to France for their holiday vacation. Wacky hi-jinx gets raised when there happen to be two villains, The Wet Bandits (really Marv?) casing out the homes on the street that very week thanks to Harry pretending to be a police officer to scope the places out. Way to get an additional charge of falsely impersonating a police officer, Harry. No wonder a 7 year old kid outwitted you two. But with that all comes a lot of questions after I recently re-watched this film… Some spoilers ahead but this thing came out in 1991 and everybody reading this article should’ve seen it already. It made memes before memes had a name. 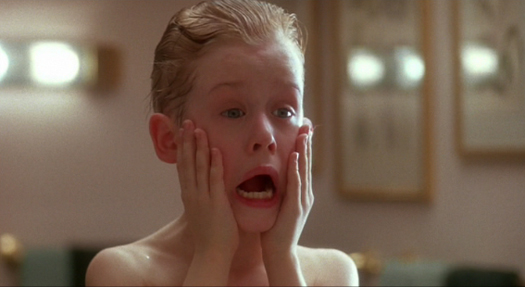 My reaction when these questions filled my head
Credit to Dad-Camp.com

Number 3: How Did Old Man Marley Know Kevin Would Be There?
Kevin spends maybe 10 minutes talking to Old Man Marley in the church, to the point that the bell rings to signify 9:00 (when the burglars will strike). Kevin races home, does not even have time to start to eat macaroni & cheese, and the burglars begin their eventual break-in much to their later regret I’m sure. Towards the end of the film, Kevin (earlier) has called 911 and tells them there’s a robbery at Marley’s house and Kevin runs off to Marley’s house. Yet Harry and Marv beat him by entering an unlocked front door, note that this is never explained either whatever my brain’s already near mush, and threaten to maim him in the same way he did to them. Except the whole finger eating, that sounds unsanitary, Harry. Behind them comes Marley, wielding his snow shovel, and he blasts both of them in the head with the cops taking a long time to show up. Was it pure luck that Marley showed up? No way Kevin told this guy his extreme plan because otherwise Marley would’ve showed up at the McAlisters in case Kevin, ya know, died. Did Marley just happen to leave the Church and see shadows inside his home? Heck, did Kevin elaborately plan this whole thing so far in advance that he busted a water pipe too? Seriously, take a look at that basement and tell me Marley doesn’t have bigger problems than just estranged kids.

Harry’s secretly a cannibal aching for kids because he needs Marv to help him… poor fella
Credit to Buzzfeed.com

Number 2: How did Kevin have all that time to set up those traps?

Just look at those traps! Even adults can’t coordinate that given 24 hours!
Credit to Gizmodo.com.au

Okay, I’ll give some leeway here as most of the traps are not that elaborate. Setting down Christmas ornaments inside a window, letting random ice freeze on steps, and shooting a gun through a doggy door don’t require much time or thought really. Kevin can get those. But how the hell is he able to pull off some of his other traps? Have you seen the length of rope necessary for that blow torch in the corner of the door? Or the red hot door handle and how hot that must be? What about the tar on the steps that poor Marv loses his shoes too?

Apparently, roofing tar takes longer if the temperature is under 70 degrees Fahrenheit and even at optimum may take roughly 4 hours. And Kevin painted multiple steps (at least 4 or 5 given that Marv also steps on a nail). Kevin openly overhears the robbers and knows they’re coming at 9 PM but even then, there’s no distinguishing the elapsed time. So on an outside chance, let’s assume that he had enough time to tar his steps, fine. He’s a genius trap creating 7 year old after all in this movie.

That has to limit the amount of time he has to set up the door/blow torch, tie a trip string at the top of the stairs, find paint cans and tie them to where he can drop them with enough force/momentum to nearly KO two adults, and heat up a door handle to the point that it burns the McAllister ‘M’ emblem in Harry’s hand. Well, at least the police have another easier way of identifying Harry in any future crimes he may commit… like in Home Alone 2. Nevermind tying a rope outside the third floor window to the tree house and making sure it was enough to handle his weight should he need to cross.

Number 1: What took the police so long?
Yeah, the police are shown as being kind of lazy when the Mom originally calls and tells them to check out her kid whom is home alone. The police dutifully go to the house and ring the doorbell but get no answer and decide it’s not really their concern so they leave. Eh, fair enough but way to paint the Chicago PD in a good light, Chris Columbus!

But then they get a call to 911 from another house on that block saying the home is being robbed. Address being given and the phone being immediately hung up is shown on-screen. Okay, well the police usually treat home robbery a little more seriously so maybe they’ll bust their butts a bit. I mean, it is the Holiday season and those cops have already checked out an empty house on the block so there’s something suspicious happening. It’s a pretty high coincidence that this is all happening over a couple nights, no?

The damning part: 2 police cars show up with lights flashing. Did they not care? Did they have to wait for Old Man Marley to make a call letting them know he concussed two burglars with the help of a 7 year old bratty kid? Even when arrested, an officer proclaims that they’ve been looking for The Wet Bandits (Marv at least tried for notoriety) for years and now they can trace their ‘calling card’ to the houses they’ve broken into in the past. Way to not think that wouldn’t bite you in the ass at some point, Harry. Actually, wouldn’t Marv have left finger prints on the faucets since he wears gloves? They’re half gloves not covering the finger tips and I’m pretty sure they were the types to have something on record. But moving on, with all of the traps and running around that entire scenario had to take at least 25 minutes if not longer than that. Harry and Marv wasted time catching their breath from being beaten with a variety of house hold items on top of everything so that added time. An old man at a Church was able to beat out the cops and he saved the day. Maybe the CPD should hire Old Man Marley as an officer.

So there you have it, my 3 questions raised (along with some others in the actual article that sprung to mind) while re-watching Home Alone. Have any other questions of your own? Comment below!

Credit to DMJuice.com for FI