I was as big of a fan of Jake “the Snake” Roberts as anyone during his WWF run from 1986-1992. It pains me then to say that however strong his psychology was, at the end of the day his in ring work often ended up being somewhat dull. Scanning over online reviews, the common thread is his feuds with Rick Rude and Ted Dibiase were infinitely memorable for their angles and promos, but the matches never hit the potential people foresaw.

That being said, I must say that the one time I saw Jake live… he was awesome. It was at a Podunk indy show in the weeks before Roberts was to enter the WWE Hall of Fame. Jake served as a partner for the local mailman, who happened to also be a physical dynamo. Thus this manly mailman was properly positioned as a top face in the town the match went down in. Roberts let the local hero take the heat, but told a great story just by standing on the ring apron and facially selling each blow and beckoning his partner to fight on.

The less said about Jake Roberts, the human being (even after rehab and DDP Yoga), the better.

I covered this bout in my “Villians of the Squared Circle” review.

This is from “Saturday Night’s Main Event”. We never get a match as Roberts attacks the Dragon before the bell and DDT’s him on the cement.  Supposedly Steamboat accidentally really did bonk his head off the cement and was knocked loopy. Heenan gets in an inside joke as Blackjack Lanza is among the officials who try and end the carnage, leading Heenan to ask “Who’s that guy?” Lanza of course had a long run as Heenan’s goon before they ended up in a feud near the end of Lanza’s career. Steamboat plays dead and is carried off. Good angle, played straight. Vince frothing as he screams on commentary is a bonus.

Jake Roberts shows off his snake collection on “TNT”. Jake does a great job with his promo work here as he speaks poetically on life’s fragility, comparing himself to the venomous companions he keeps.

This is from Boston I believe. Roberts blocks Steamboat’s karate thrusts with his forearms and then snickers at Steamboat’s failure. Awesome. They struggle for wrist control, fighting for a chance to control the match. Steamboat sells well, as he always does, with Roberts continuously blocking the Dragon’s attempts at throwing martial art blows. Roberts avoids more attacks by clinging to the ropes as Steamboat attempts to whip him off for a strike.

They go tit for tat in the middle of the ring, with Steamboat using speed to land some blows and send Roberts reeling. Steamboat proves to have figured out Roberts’ defense, as he fakes going for high chops, only to strike Roberts’ midsection when Roberts attempted to block the upper body assault.

Steamboat misses a chop and wacks his wrist into the ringpost. Roberts pounces on the wound and slams the wrist into the barricade, then wraps it around the post and wrenches on it. Roberts uses the injury to control the next several minutes of action before Steamboat manages to dump his throat across the ropes. A fiery comeback follows. It is “ruined” (for me) only by the Dragon using his bad wrist for a flying chop from the top rope, with no ill effects.

The ref is bumped, and Roberts scores several visual pins. The Snake drags the ref to his feet, but is rolled up by Steamboat for the pin before Roberts can continue his assault. The fans go nutty for their hero winning. Roberts wipes out Steamboat after the match. A DDT lays him out and Damien is produced. Dick Slater and Ted Arcidi run in to save their comrade. I loved the psychology here!

We get a Coliseum Video exclusive promo with Roberts. He’s now a babyface but does not atone for his past sins. He’s a loner, a little bitter from life and his past, and he’s not a person to trust. He warns everyone from Hulk Hogan to Killer Khan about wrestling him.

I’m surprised they actually labeled this a “dark” match, which I would think is too inside of a term for the audience buying this tape. JYD and Roberts trade blows, with JYD winning, since he doesn’t tend to move. Roberts sells and bumps as JYD remains standing in the center.  Roberts teases playing doggy with JYD as they both go on all fours, but the Snake attempts a cheap shot and misses. He winds up on the floor in retreat.

JYD takes his first bump of the match as Roberts lures him into a “chase” and manages to catch him with a knee lift. Not wanting to exhaust our hero, Roberts locks on a headlock. Jake toys with the ref and the fans by putting his feet on the ropes, creating heat while JYD sucks wind.

Dog fires up and slams Roberts eight times in a row, never even bending at the waist as he tosses the Snake to the mat. The fight moves to the floor, where Roberts tries to go for Damien and winds up counted out as JYD sneaks back in. A dud of a match, but it was a pleasure to watch Roberts work around the statue he was put in the ring with. 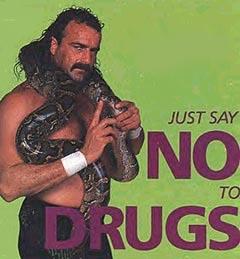 This is from MSG only days after Jake was bonked on his “Snake Pit” interview set by the Honky Tonk Man and his guitar. Jimmy Hart is at ringside to call the action with Monsoon. Bundy at 400-plus pounds bumps more in the opening minutes than JYD did in his whole match. Roberts downs Bundy with strikes, then foolishly agrees to do a test of strength with Bundy, which he loses.

Bundy grinds away at Roberts with forearms and headlocks as Hart and Heenan entertain us by dueling with Monsoon on commentary. Hart talking about his men’s Wrestlemania angles (Honky vs. Snake, Bulldogs/Tito Santana vs. Harts and Danny Davis and Piper vs Adonis) make me want to watch Mania 3 again. At the rate I’m writing my history pieces, it may take another two or three years!

Roberts avoids an elbow, but can’t score a DDT on the big man. Bundy bails out and ends up counted out or something. We never get an announcement. This was a bit of a dud, probably due to the styles clash. Bundy runs from Damien and we cut to…

Well, the last match was dull, so let’s have a rematch on national TV! From “Saturday Night’s Main Event”. Roberts tries the test of strength again, losing quickly. Roberts rattles Bundy with a kneelift, which prompts Heenan to steal Damien, leading to Jake chasing him to the back for a commercial break.

Roberts avoids Bundy’s fat man offense and rocks the corpulent behemoth. The ref gets struck by Jake by accident and that earns a DQ for the Snake. Bundy eats a DDT anyway (which was botched since Bundy is so damn big) and Heenan has to save his charge from Damien. This wasn’t good, as it was a bit disjointed as they rushed through a few spots in between a snakenapping and the lousy finish.

Jake “the Snake” Roberts vs. the Honky Tonk Man

From Wrestlemania 3. Honky is jumped before he can even get his suit off as Roberts is pissed over HTM smashing his “gee-tar” over Jake’s head a few months earlier. Roberts batters Honky until HTM manages to catch him with a knee. Roberts fights back quickly, hitting a short clothesline. HTM avoids the DDT. Honky manages to slam Roberts into the post on the floor, giving Alice Cooper, who is seconding Roberts, a chance to earn his paycheck by helping Jake to his feet several times.

You have to wonder what a guy like HTM was thinking as he worked in front of 80-93,000 people less than a year after working tiny spot shows in Canada for nickels and bologna. Roberts rallies, but Hart hangs on to Jake’s boot as he tries a DDT. Roberts turns his back and Honky cradles him with his feet on his ropes for a bogus pin. They cut the real fun from this match off this tape as Alice Cooper and Roberts torturing Jimmy Hart with Damien is not seen.  The fans are NOT impressed with Honky screwing their anti-hero out of a big win.

Jake “the Snake” Roberts vs. Kamala

Another one from “Saturday Night’s Main Event”. Kamala, a cannibal from the jungles of deepest, darkest Africa, is afraid of snakes. Hmmmmmm. Kamala dominates with savagery, with Roberts only getting a little shine by stomping Kamala’s bare feet.

Roberts tricks Kamala into chasing him, allowing the Snake to score with a kneelift. A DDT is teased, but Kim Chee runs in and smacks Roberts, downing him for a splash and pin. Kim Chee unmasks as HTM, but we never see any more post match antics as the VHS goes to credits. Fairly quick match but the fans were HOT for the finish.

Final thoughts: This didn’t feel like a real showcase as Roberts spent much of his own tape losing and getting beat down. The Steamboat match is certainly worth checking out though.