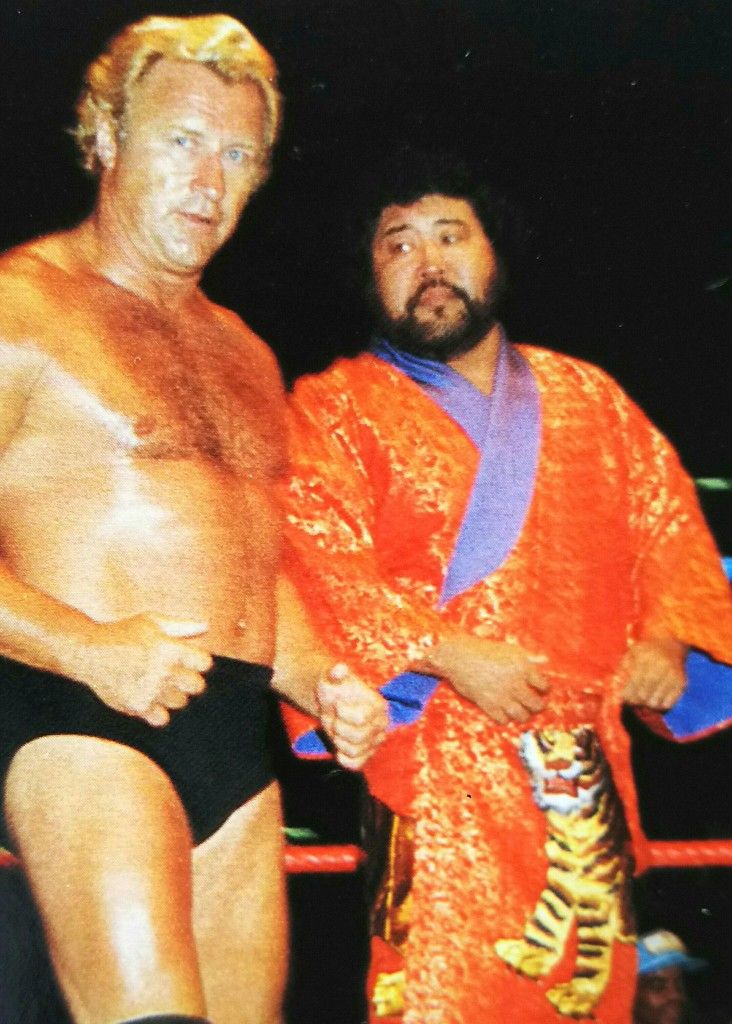 Mr. Saito’s role as one of the top heels in the AWA came to an end as he headed back to Japan to work for Giant Baba for the month. Saito was probably also visiting his family in case his forthcoming trial in Wisconsin landed him in jail for a while. Greg Gagne was the big loser in this scenario as Saito and Nick Bockwinkel were embroiled in a feud with him. Bockwinkel would use Ray Stevens and Larry Zbyszko as his new partners. This feud would take another twist a month later as Gagne’s partner Jim Brunzell jumped to the WWF. Gagne replaced him with a rotating band of partners before going into Sgt. Slaughter’s boot camp and coming out with a ridiculous new gimmick. More on that in a few months…

AWA World champion Rick Martel began a feud with the Fabulous Freebirds after they attacked him as a group in Chicago following a match with Martel and Buddy Roberts. Many fans have commented in the modern era that Martel’s run with Michael Hayes felt too similar to the feud he had just wrapped up with Jim Garvin since the heels shared very similar gimmicks.

The AWA World tag champion Road Warriors pretty well carried the promotion as they headlined against Curt and Larry Hennig as well as the team of Jerry Blackwell and Sgt. Slaughter in several towns. 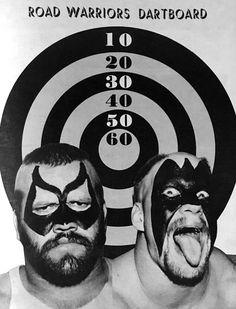 The promotional war with the AWA and the WWF continued in Denver as the WWF drew 5,000 fans to see Tito Santana tangle with Intercontinental champion Greg Valentine, as well as the U.S. Express knocking heads with Nikolai Volkoff and the Iron Sheik. The AWA countered with a stacked event featuring a cage match between Da Crusher, Jerry Blackwell and Sgt. Slaughter facing the Masked Superstar, Sheik Adnan and King Tonga. Plus Rick Martel defended his title against Jim Garvin, Greg Gagne tried to gain some revenge against Nick Bockwinkel and the Freebirds downed Jim Brunzell and Steve O. The AWA returned to Denver three weeks later with Brunzell teaming with Larry “The Ax” Hennig and the Baron against the Road Warriors and Paul Ellering, along with another Gagne/Bockwinkel encounter.

The WWF got some extra press for their Chicago event by having Oprah Winfrey’s “AM Chicago” TV show air several of the matches. Oprah served a commentator in what was truly a surreal hour of television. Hulk Hogan beat Don Muraco in the main event, with JYD and Tito Santana downing the Dream Team in the co-headliner. My review of this wackiness is here. The AWA countered with Sgt. Slaughter and Jerry Blackwell taking on Paul Ellering and Road Warrior Animal. Hawk was a no-show. King Tonga also failed to show up for the other main event of the evening, leaving Buddy Roberts to take his place against Rick Martel. The Hi-Flyers tried to clip the Freebird duo of Roberts and Hayes as Terry Gordy did not make his scheduled booking either. Da Crusher took on the strongman Butch Reed in the other match of note. The card drew 5,000 fans.

The WWF debuted in Milwaukee with the familiar main event of Tito Santana chasing IC champion Greg Valentine. The U.S. Express attempted to wrest the tag straps away from Sheik and Volkoff. AWA favorites Mad Dog Vachon and Jesse Ventura appeared as well. They only drew 1,000 fans. The AWA drew 3,200 fans to see the Road Warriors sock it out with Crusher Blackwell and Slaughter. Rick Martel grappled with Nick Bockwinkel over the AWA gold and Jim Brunzell battled Butch Reed.

San Francisco drew 5,000 fans for a pair of cage matches as the Hennig family teamed with Sgt. Slaughter to duke it out with the Road Warriors and Paul Ellering, then Blackwell bruised Sheik Adnan up in the other cage match. That same double main event drew 10,500 fans in Salt Lake City. The San Francisco card would mark the end of the AWA running the Cow Palace for a good chunk of time as the WWF strong armed the local promoters to not book them in the building any further.

The Road Warriors were involved in several headline bouts as Rick Martel took on both Jos LeDuc and Dino Bravo as his partner at different times to face the Warriors. 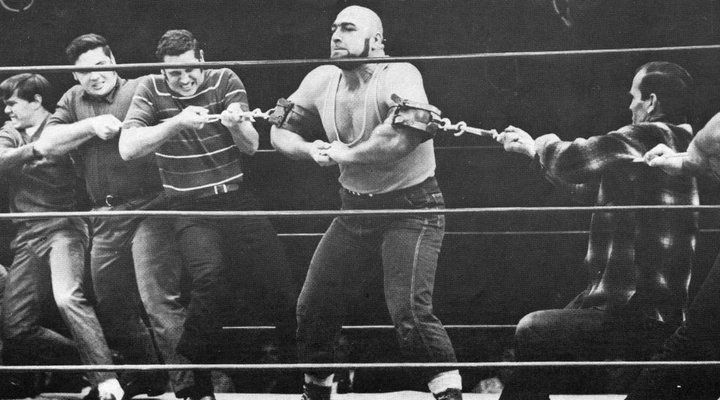 Although the big angle between the families is still a month away, Montreal fans saw the first tease of the Rougeau family feud with the Garvins as Jimmy faced off with Jacques. Much more on that in June.

The concept behind this “super group” of talent was officially dead as the AWA ran the Pro Wrestling USA TV tapings in Minneapolis and didn’t even bother to bring in any outside talent, including the Tonga Kid, who was actually over in his brief run here. In addition to the thirteen squash matches, the fans were treated to Rick Martel fending off Nick Bockwinkel, Larry Hennig and Crusher Blackwell trying to shatter the Road Warriors, Jimmy Garvin trading blows with Da Crusher and Blackwell exchanging bombs with Terry Gordy.

The last few co-promoted house shows didn’t go too well as Dusty Rhodes no showed his booking in what was believed to be Jim Crockett messing with Verne’s project. In addition to that, “Hacksaw” Duggan and the Freebirds got drunk and missed another date. Bob Backlund was reportedly so over at the Meadowlands that some fans chanted “child molester” at him.

The Great Wojo (Greg Wojciechowski), a former NCAA champion, was offering fans a chance to beat him in a shoot for $1,000. With kayfabe being widely murdered over the past year by the WWF, it feels a little nutty for stunts like this to still be going on, even on some low level show like the WWA was putting on at this point.

Jerry Jarrett returned to the ring for the first time since March of 1981. In order to do so he had to give up his stake as majority owner in Memphis due to Tennessee laws. No one believed the deal was legit regardless. Tom Renesto was named booker to replace Jarrett. Looking at the cards, I wonder if Jarrett returned due to the talent level being at a very poor level, minus the main event talent. Jarrett slummed it up with JR Hogg, Jerry Bryant and others in tag matches, which kind of feels like a waste.

Memphis was actually hoping to get ESPN’s proposed slot for wrestling and so they taped a “pilot” episode with Jerry Lawler fighting Randy Savage in the main event. The promotion paid for a better lighting rig and used a fresh mat to spruce up the look of the Mid-South Coliseum.

In other action throughout the month, Lawler teamed with the ever-dangerous Bruiser Brody to face off with Savage and “Dr. D” David Schultz. Since Schultz was never one to skirt controversy, he went on live Memphis TV wearing a swastika, telling the fans that Lawler couldn’t find a partner because he had AIDS! Lawler and Brody’s face off with Savage and Schultz ended in a draw, with Brody then turning on Lawler. This led to Lawler bringing back Bill Dundee from Mid-South for one night only to be his partner against Brody and Kareem Muhammad, Lawler and Brody came back a week later to face off one on one, but Brody refused to do the job for Lawler, settling on a DQ loss. They clashed one last time as Austin Idol was brought in from Southeast Championship Wrestling to serve as Lawler’s partner against Muhammad and Brody.

Meanwhile, Randy Savage spent his final month in Memphis feuding with Jerry Oski. He and Lawler would build to one final match in early June, and then Savage was off to the WWF.

This promotion was gearing up to change it’s name at the beginning of June to “Continental Championship Wrestling” in an effort to sound more national and perhaps make a harder play at the proposed ESPN TV slot. Promoter Ron Fuller expanded his promotional base by pushing back into Knoxville, Tennessee and adjoining towns that SCW had run years earlier before they decided to sell off the cities to Ole Anderson and Jim Crockett due to poor ticket sales. Fuller was also supposedly in talks with CBS about putting on a wrestling show.

NWA champion Ric Flair came into the area for two events in order to defend the strap against local hero Bob Armstrong. The next month’s big match was set up when Lord Humongous won a tournament to become the number one contender to Flair’s title. This would ultimately lead to Ron Fuller teaming with Flair to take on Humongous and Armstrong in tag team action.

Next time, we’ll finish up May 1985 by looking at JCP’s aggressive expansion tactics, Portland’s last (?) true mega show, a stadium megacard in World Class, a Hall of Famer’s humble start, plus news from Mid-South and Florida. Thanks for reading!