Concerts coming to your area: Good and Bad

Epic for the Summer said:
Sebastian Bach is currently touring playing the entire first Skid Row record in its entirety to commemorate its 30th Anniversary. He's coming to NY on 9/25!

The last time Bach was in Portland, he has been late because he insisted on eating at an old school, red sauce Italian-American restaurant 30 minutes outside of town. He's in town tonight and according to someone in my Twitter feed is an hour late getting onstage. Hopefully cause he's at that Italian restaurant next to the Scarborough Marsh.

Whenever I think of Bach now, I just imagine him squealing "Dude! I'm not going on fucking stage unless I get that fucking veal parm, man!" in his high pitched Canadian accent.

Hard to say if I should post this in here or in the games thread.

Super talented group of guys, really down to earth. Their whole gimmick is that they play rock covers of video game music, while their pal does close to a speed run of the game on a projection screen. The beauty, to me, is that he's really damn good but not perfect. For the show I saw they did Metroid and Contra on NES (appears this is their current tour). The guy didn't lose a single life on Metroid, but did die 3 times in Contra. What's cool about that is the band has to adjust the timing of what they're doing if he dies. While there's no pause in the game music for a respawn, it does extend the amount of time in the level. But they're so good at what they do, they still finish the song when he finishes a level. It was really cool, at least for me, to see it.

Their merch has the band name on it with art inspired by NES game covers. They happily took pictures with me and interacted before and after the gig. The show was in a smallish venue and tickets were $12. Not sure if that's typical of their entire tour, but looks like after they hit Texas they're heading for the West Coast.

I don't have video from last night but here's an example from a prior performance: https://www.youtube.com/watch?v=YsJ9d3rNgHM

They have a pretty decent following, but apparently not enough to get their drinks comped. While bsing with one of the musicians he had to go close out his tab at the bar and retrieve his credit card. One of my best friends is a touring musician and I've never seen him have to open a tab. He was with me for this show and talking shop with one of the Brigade and apparently they've hit a lot of the same smaller venues in their travels, so I really have no idea how this music business works.

Anyway, if you like rock music AND retro games, this is a definite group to hit up. 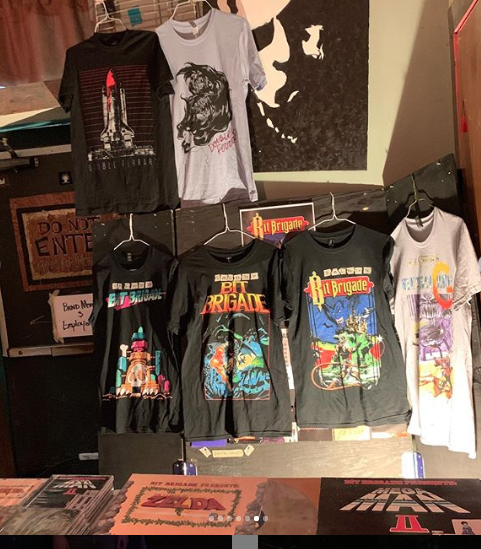 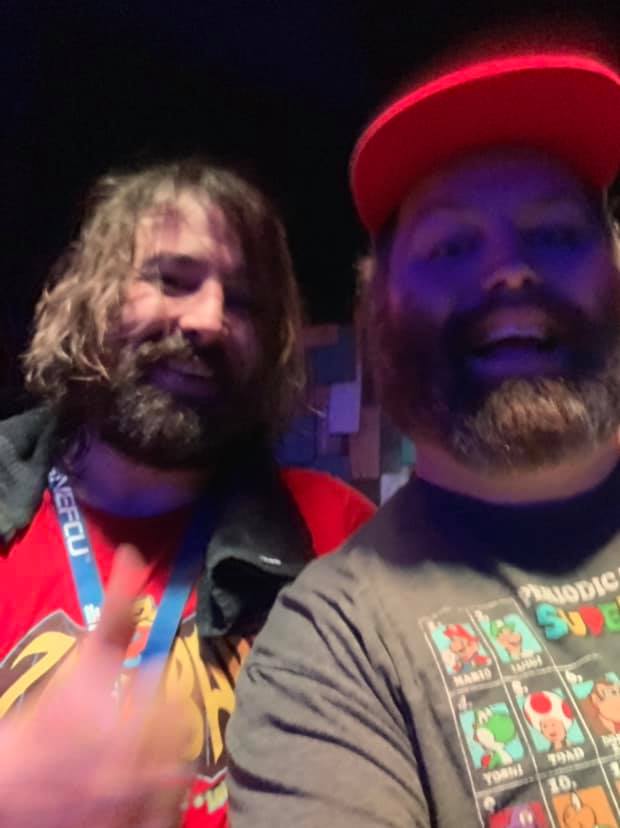 Drummer was busy tearing down his gear and wasn't available for the group shot, but he took a selfie with me. 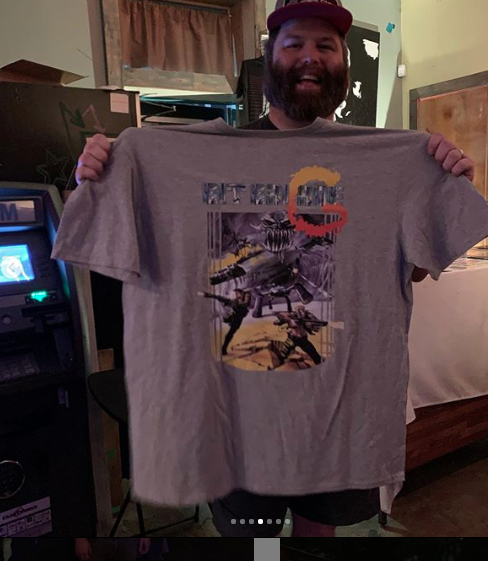 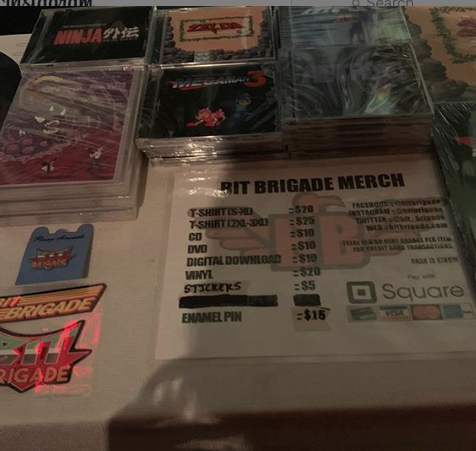 Staff member
Reading your post, Bit Brigade sounded familiar but I was trying to remember if I'd seen them at MAGfest or if I'd just heard of them because of other video game bands. Once you mentioned the speed running I realized oh yeah I saw them, then you linked the recording of THE SHOW I SAW. The odds, what are they?

I'm glad you enjoyed the show and it's good to know that they're still around, I had a blast at the show I went to. That's awesome too that they were all cool people and took pictures. I think Contra would be fun, but I'm really jealous you got Metroid. I could see that being amazing.

Alanis Morisette is doing an acoustic show in NYC performing "Jagged Little Pill" (the Broadway play based on the album just opened) in its entirety. I was intrigued but saw tickets went on sale at 10 AM and were sold out by 10:03. Places like Stubhub are selling them for $2K a pop. People are all over my Facebook feed bitching and complaining. Just thought that was funny.

Ringo Starr & His All Starr Band and The Avett Brothers are doing a couple of co-headlining dates together in New England in June. That's weird as hell but I'm pretty sure I'm get tickets for me, my lady, and Mom & Pops Kamala.

The Black Crowes (which is just going to be The Robinson Brothers and a bunch of hired guns) are reuniting for a Shake Your Moneymaker 30th Anniversary Tour this summer. And they're promising no jamming and just the hits.

Considering how much The Robinson Brothers hate just the hits (and each other) and love jamming, this tour just screams "Keep getting them checks"

Both Rage Against the Machine and Faith No More have announced festival dates for 2020. I've seen FNM twice since they first reunited so I'm good with not seeing them again but Rage is one of my only bucket shows left so if a full scale tour ever comes out of this then I'm there for sure. There was a fake tour poster floating around social media yesterday which got everyone's hopes up

Managed to get tickets to Bikini Kill in May, in Toronto, and tickets to both nights of the Lunachicks reunion, in April, in NYC! So hyped!

Fall of Epic said:
Alanis Morisette is doing an acoustic show in NYC performing "Jagged Little Pill" (the Broadway play based on the album just opened) in its entirety. I was intrigued but saw tickets went on sale at 10 AM and were sold out by 10:03. Places like Stubhub are selling them for $2K a pop. People are all over my Facebook feed bitching and complaining. Just thought that was funny.
Click to expand...

Never fear because Alanis is coming here next summer to commemorate 25 years of "Jagged Little Pill". Garbage is opening!

Liz Phair is on the tour too

Machine Head are stopping here soon for the 25 year anniversary of their debut, "Burn My Eyes". I wouldn't say I'm a MH fan but I'll always maintain that BME is one of the best metal debuts of any band ever and I'll fight anyone on that.

Def Leppard, Motley Crue, Poison, and Joan Jett & The Blackhearts are touring stadiums together this summer.

WHAT HAPPENED TO THAT CESSATION OF TOURING AGREEMENT, NIKKI!?

I knew it was only a matter of time once "The Dirt" was released. There was no way they weren't going to tour again. I feel bad for Mick Mars more than anything. Dude is frail as fuck.

I legit thought he had died.

WHAT HAPPENED TO THAT CESSATION OF TOURING AGREEMENT, NIKKI!?
Click to expand...

They're playing Citi Field on a Sunday late afternoon. I might hit this up.

jerk of all trades said:
I legit thought he had died.
Click to expand...

DDP is offering to help Vince Neil with his yoga program too. I feel like this tour might legit kill him and Mick Mars. Whole endeavor seems sad to me. It seems like the Crue did legit want to retire but they're just such fuckups (and The Dirt did well enough) that they're dragged back out on the road.

The long wheezing death of rock and roll rambles on.

I know Neil toured solo the past few years and his setlists were all 85% Crue tracks so yeah, the writing was on the wall ever since they played their last show. None of them are going to be nearly as successful on their own (I don't think anyone is clamoring for a Methods of Mayhem reunion)*. And again, Mick Mars' health is going to be a giant concern in play here.

*
I kind of enjoyed Tommy Lee's first solo album though!

RATM going out on tour and shockingly they're playing Calgary. Definitely trying for tickets on that one.

Saw this group will be playing a show in March

I remember them showing up on The Best Damn Sports Show! Period like 16-17 years ago. I wonder if they've had as many lineup changes as the actual KISS.


In a somewhat more serious but similar vein, for Pops Kamala's birthday, I bought him tickets to see Lez Zeppelin, an all female Led Zeppelin tribute band, perform Physical Graffiti in its entirety. This is my first time seeing a national tribute band but I guess I better get used to it if I want to keep seeing classic rock concerts beyond the next 5-10 years...
Z

Zetterberg is Go said:
RATM going out on tour and shockingly they're playing Calgary. Definitely trying for tickets on that one.
Click to expand...

Was sent a message about Backstreet Boys coming in October
Z

Zetterberg is Go said:
RATM going out on tour and shockingly they're playing Calgary. Definitely trying for tickets on that one.
Click to expand...

And got my tickets. Apparently Toronto added another show pretty quickly. Not sure if that will happen here but who knows.

I thought I was SOL for RATM. They announced 2 dates in NY and both sold out in minutes (charging over $200 for nosebleed seats? C'mon dudes). They then added a 3rd date and my buddy was able to grab some tickets for the both of us. I'm very excited. This is a show over 20 years in the making for me and one of the last bucket shows I have left (as there's no way of seeing the likes of Beatles, Led Zeppelin, Pink Floyd, etc.)

Korn and Faith No More just announced a co-headlining tour. Kind of surreal to see FNM perform alongside the guys who basically ripped them off.

Not so surprising since FNM's drummer has worked with Korn in the past. 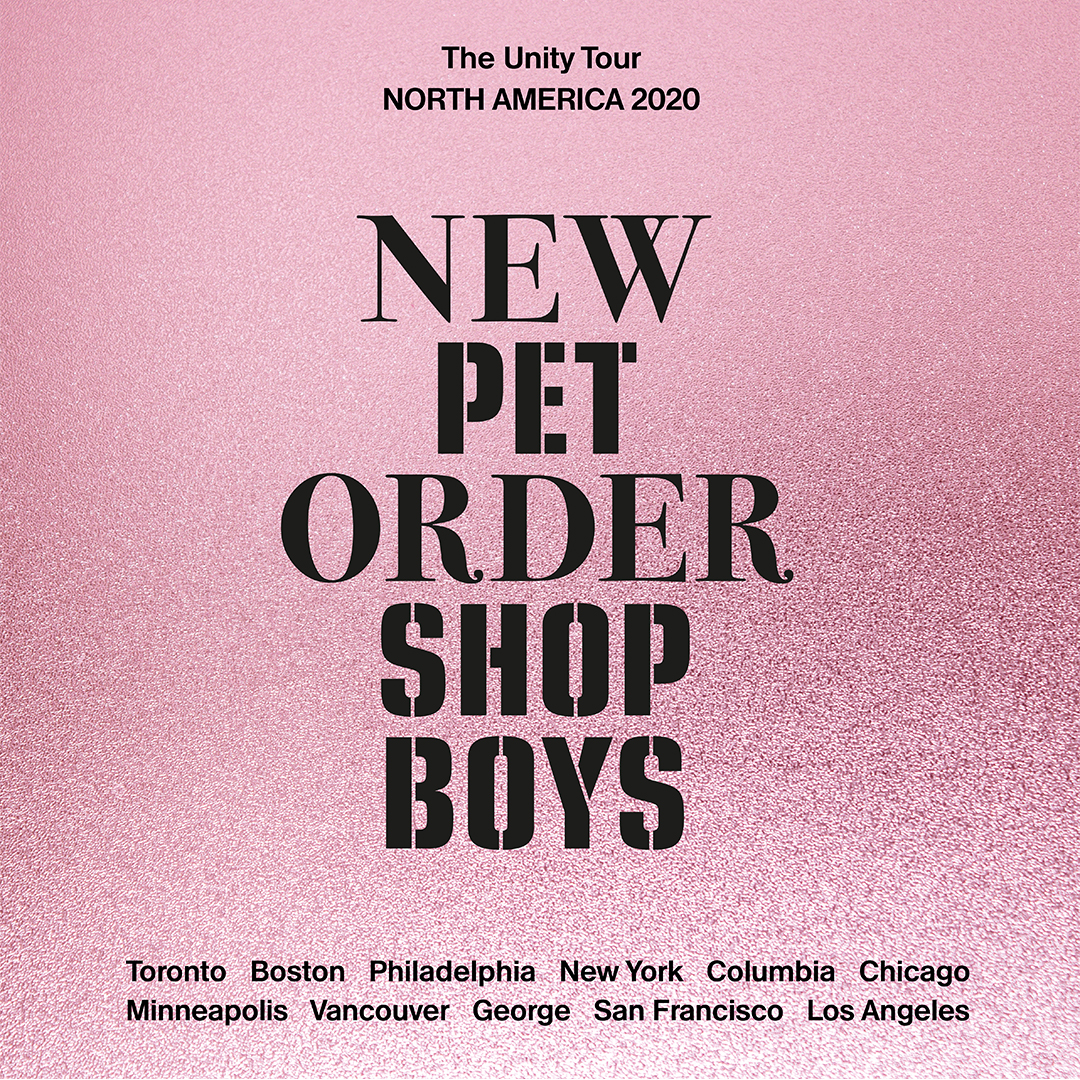 Fuck yes this is coming to the Garden during my (mandated) five-day break from work in September and I will be THERE
Click to expand...