I just want to point out that Raven's "Come As You Are" knock-off is a to 5 WCW theme.

I swear on @BruiserBrody 's life that I had a dream last night that I was watching a '99 Monday Nitro on YouTube last night and The Filthy Animals came out to a remix of Sugar Ray's "Fly". I remember subconscious was eagerly looking forward to going back here to tell everyone how I actually thought that music choice was dorky but kind of fit---Kidman and maskless and overall wearing era Rey Mysterio.

Unmasked Rey was so weird. Guy just is made to be masked. Between he and Kidman, Konnan looked like a total workrate groomer.

Yeah, I don't get Bischoff's thinking that maskless Rey had undeniable movie star good looks that had to be capitalized on. IIRC, during his first appearances sans mask, I remember Tony and Tenay being like "WOAH! HE'S ACTUALLY GREAT LOOKING KID! WHY'D HE WEAR A MASK!?"

Like I get the decision to unmask Juvi and Psicosis even if I didn't agree with it but Rey looked (and probably still looks) 10 years younger than he actually is. Which is fine now that he's 45 but not great when he was 25! It really just emphasized all of the dumb criticisms of the WCW cruiserweight division. Not are only these guys the size of a 15 year old, they actually look like they're 15 too!

"Tony look at him!"
"It's like Simon Birch is right here on Nitro!"

Seeing Rey without a mask really was one of the last moments Heenan had a fire lit under him during his WCW run.

Was it Rey Mysterio or Juventud Guerrera that WCW P/R planted a story about them dating Jennifer Aniston in The National Enquirer? Like c'mon. At least, pick someone believable like Nash.

Birthday King Kamala said:
Seeing Rey without a mask really was one of the last moments Heenan had a fire lit under him during his WCW run.

Was it Rey Mysterio or Juventud Guerrera that WCW P/R planted a story about them dating Jennifer Aniston in The National Enquirer? Like c'mon. At least, pick someone believable like Nash.
Click to expand...

PWI had their cartoon one month portraying a smiling Rey being eye level with a giant breasted "Aniston" toon.

Brody: Modern wrestling is too goofy.

Hey if you watch the little kids in the crowd during that Black Scorpion bit where he turns that audience member into a tiger, you almost see something was possible. 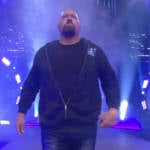 Paul Wight recently looked back at his infamous 1995 segment with Hulk Hogan in WCW where he ended up getting pushed off the roof of Cobo Hall.

411mania.com
There we go. An 10+ year old "We Watch Shitty WCW Club" mystery RE: "Just how DID The Giant fall off the roof of Cobo Hall" is solved. I even e-mailed Meltzer about it and he never responded LOL.

Who's our Alabama regional expert? Conrad and Eric spoke of a New Brockton, AL show in early 93 that drew 100 or less fans but Cawthon's site doesn't have it listed, but maybe it is under a nearby town?

WCW @ Gadsden, AL - Coliseum - March 21, 1993
Steve Regal fought Keith Cole to a 10-minute time-limit draw
Erik Watts & Marcus Alexander Bagwell defeated the Wrecking Crew
Robbie V defeated Mustafa Saed
Van Hammer defeated Vinnie Vegas
WCW/NWA Tag Team Champions Steve Austin & Brian Pillman defeated Ricky Steamboat & Shane Douglas
--
The Slamboree talk really makes me wish we had any stories come out of the old guys getting smashed over the weekend and hooting it up with the roster and the local broads.
You know fucking Flair had Murdoch, Dusty and Mulligan downing shots of Jack all night long. I would have added Crusher to the mix, but in recent years we have learned the beer chugging was a gimmick and he actually liked drinking wine.
Don Muraco and Jim Brunzell were younger than a lot of today's headliners. (Both about 43-44).
Brunzell of course was part of my most repeated bit of trivia as he worked this PPV the same month as doing WWF TV jobs. (IIRC it was HBK)

I have never heard of this being a thing, but I wonder if Bill Watts' connection to SMW/Corny at all influenced the germ of the idea for Slamboree?

Had Watts stayed on, I can see Corny freaking out when WCW told him Whitey Caldwell and Ron Wright weren't big enough stars to the national audience to bother with any packages or invites. (Caldwell was dead IIRC)

I also sort of realized it was odd Ron Garvin never appeared at any of the WCW legend shows (unless I blanked out on him being there?)

It's a shame Tommy RIch didn't hang on a bit longer. They could have had all these NWA champs to coo about in the ring like Thesz, Race, Funks, Kiniski (Obv. no Brisco) but then Rich is just a scrub undercard guy on the 2nd match of the PPV....

Jim Ross talking about Bill Watts being brought in to run WCW on this week’s John Arezzi podcast.

Should be more interesting than the recent Grillin’ JR’s on ‘92 WCW anyway.

https://twitter.com/i/web/status/1531912920875016192
I had checked out of WCW by this point. I remember flipping on Nitro by my brother's or something like that and seeing Lobster Sting for the 1st time and I was just like WTF Why is Sting of all people in the NWO?!?!?

Chick looks way better as a jacked seventy something dude than Vince or Naitch. Score one for the jobbers, I guess.

I saw that picture yesterday and was going to post it here. When I see that and the Flair stuff, I just can't get over what it must be like to take the bumps at those ages. I get that lifting helps with your body as you age, but I can't imagine what those feel like when you're 60+ and on.

It's sort of interesting that with all the booking changes that the Bookerman always pushed the Birds from 89 onward. I guess u can blame Dusty after 1990 regardless.