Vintage Independent Wrestling Thread: Discuss the Stars of Today Yesterday When They Were Stars of Tomorrow

Ron Wright! Actually quite a credible name in that territory. Considering it looked like an infomercial it wasn’t that bad honestly.

Sex Machine Gun said:
Who was Dave Prazak on here? Also, who is Dave Prazak?
Click to expand...

I forget what name he used, but he was the PBP guy for Ring of Honor for a long time, and also does commentary for GCW and IWA Mid-South.

That Al Snow is a damn goofball spot monkey that'll never learn how to work!!!

Sabu in the WWF would've been so awesome. Don't care what anyone would say.

The whole match is on YouTube. I watched some highlights last night, and fuuuuuuuck it's a miracle if these guys can still walk.

Yeah, there's a pile driver from the ladder onto top turnbuckle with both guys falling out of the ring spot. Insane. It's like stuff you'd have your wrestling action figures do not anything you'd expect anyone to try IRL.
T

Watched the whole match on YouTube. A lot of contrived spots, especially in the last 10 minutes, but there were a few things I’m shocked haven’t been poached by somebody in a bigger company.

It's going kind of viral on Wrestling Twitter so I wouldn't be surprised if someone did in the near future.

If either of these guys are still walking, they'll probably appear on a GCW show ASAP.

The recent influx of indie footage from the mid 00s has taught me that Canadian "extreme" promotions all did it better in the 00s than the rest of the world, not just IWS.

In which a priest serves as guest ring announcer for a brutal (good) Necro Butcher Vs Low-Ki match.

Tino Standard said:
Watched the whole match on YouTube. A lot of contrived spots, especially in the last 10 minutes, but there were a few things I’m shocked haven’t been poached by somebody in a bigger company.
Click to expand...

The suplex onto the other ladder wasn't that bad, looked awesome, and is definitely going to be copied.

It's funny. I genuinely thought that we could never see anything truly innovative in a ladder match ever again and a damn 20 year old Canadian indie match proves me wrong.

That one has an even more insane spot toward the end.

Those later Gallagher specials were weird.

Yelling at uber nerds for being uber nerds? It pains me a bit to see that airing as apparently part of a indy broadcast. KAYFABE


Was making big money in WCW really so bad that Lane and Corny preferred this? (Yes, Corny was plotting out SMW at this time.)
Orndorff and Candido from SMW also appear.
Plus the AWA's Tom Burton, Memphis' Jeff Gaylord and Sunny Beach from UWF.
Oh and Iron Mike Sharpe, because why not??

Do you know the Gordon Scozzari story, Brod? Teenager that inherits a couple hundred thousand from a dead grandparent and becomes a money mark that starts the AWF (the one that you posted not the one that had a rounds system and Terry Taylor doing goofy impressions). He quickly gets ruthlessly ripped off by countless wrestlers who bleed him dry. He gets mad at Eddie Gilbert for no-showing when he agreed to be head booker so he pays Jeff Gaylord to try and beat him up at a GWF taping.

15-20 years later, he shows up for one of the GOAT (only good) Wrestling Classics thread


Pfft. This Terra Ryzing goof will never amount to anything.

I only knew of Gordon Shumway. That hairy lil bastard.

Look up the WrestlingClassics thread, it’s good. He also appeared on a recent John Arezzi episode. Well archivally appeared. He has been dead for a few years. But they seemed genuinely enthused about the promotion’s potential and how it was going to be like Herb Abrams UWF except done right LOL.

Arezzi and his co host kept conflating it with the Paul Alperstein AWF though and the millennial producer didn’t know or didn’t bother to correct their boomer reminisces LOL.

Dusty tries to run his own promotion 3 months after JCP. Trying the Big Bubba formula w/ a former Big Bubba, now Big Steel Man didn't work for drawing.
Both Dusty and Ottman would be in the WWF within months. The Apters reported Ottman was going to replace Akeem in the Twin Towers. I don't think Big Steel Man ever made TV before Tugboat but the Apters played it straight and talked about how Slick had signed him. 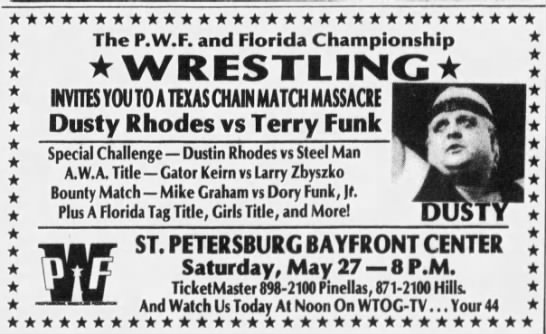 A lot of guys out of their primes (in the case of Dustin, pre). But that's not a bad looking card.

I don't think the guys were too far removed from their prime either. Terry Funk had to be replaced on the card cause he jumped to WCW, Dusty was a week or two away from jumping to WWF. In addition to Dustin, you also had the Nasty Boys on the card for up and comers ( Tugboatg and Jimmy Del Ray!)

I feel like the Joe Pedicino's and Herb Abrams' of the world should have looked at the complete and total failure of the PWF (which was centered in Dusty Rhodes' home territory) as a sign that there really wasn't a market for a #3 promotion in the early '90s. This Terry Funk-Dusty Rhodes match only drew 800 people in Miami!
You must log in or register to reply here.
Share:
Facebook Twitter Reddit Pinterest Tumblr WhatsApp Email Share Link
Top